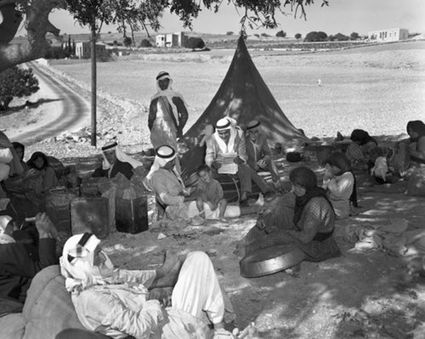 Individuals described by the United Nations as Palestinian refugees are pictured in Lebanon in January 1948.

While Israeli government ministers in recent weeks have dueled over the acceptance of Palestinian "refugees" in a possible future Palestinian state, experts say the Arab world continues to refuse to take responsibility for the issue.

"Unfortunately, responsibility is something which Arabs do not believe in, and therefore they demand that Israel solves a problem which they created," said Dr. Mordechai Kedar, a research associate at Bar-Ilan University's Begin-Sadat Center for Strategic Studies and a leading scholar on Arab culture.

Israeli Defense Minister Avigdor Lieberman had called for no Palestinian refugees and their descendants to be admitted into the pre-1967 lines as part of a future Palestinian state. Instead, he said, they should be absorbed into the current Palestinian Authority (PA)-controlled areas in the disputed territories. Lieberman made the comments at the recent Herzliya Conference.

Education Minister Naftali Bennett quickly rejected Lieberman's plan, telling Israel National News that the descendants of Arab refugees should not be allowed into Area C of the disputed territories, which is under full Israeli control.

"The idea of importing millions of refugee descendants from Syria, Lebanon and Jordan is a very dangerous idea that will flood Israel with Palestinian refugees. It took 40 years for Zionism to bring a demographic majority between the Jordan River and the sea," Bennett said.

Today, there are an estimated 5 million Palestinian refugees and descendants of refugees. The pro-Israel community disputes this number because the Palestinians count descendants as refugees. The Palestinians are the world's only refugee group with a United Nations agency-UNRWA-dedicated solely to their concerns. According to U.N. Resolution 194, "refugees wishing to return to their homes and live at peace with their neighbors should be permitted to do so at the earliest practicable date, and that compensation should be paid for the property of those choosing not to return and for loss of or damage to property which, under principles of international law or equity, should be made good by the governments or authorities responsible."

In 2014, during the most recent round of Israeli-Palestinian peace talks, Prime Minister Benjamin Netanyahu declared there was "no room to maneuver" on the Palestinian claim of a "right of return" for refugees.

The status of Palestinian refugees has long been a sticking point in Israeli-Palestinian final status negotiations.

Israel's current internal debate on the refugee issue comes amid uncertain prospects for a two-state solution to the Israeli-Palestinian conflict. President Donald Trump, who has stated his desire to broker a peace deal, said in February, "I'm looking at two states and one state. I am very happy with the one that both parties like." Trump's remark broke with America's longstanding firm commitment to a two-state solution.

In the past, Netanyahu has repeatedly emphasized his support for a demilitarized Palestinian state that recognizes a Jewish state, but his current position on the issue is unclear.

Kobi Michael, a senior research fellow at the Tel Aviv-based Institute for National Security Studies, told JNS.org any talk of a two-state solution "for the time being and under the current circumstances is a theoretical and irrelevant issue."

Nevertheless, Michael hypothetically analyzed the merits of Lieberman's plan. Demographically, Michael does not see a risk in allowing refugees into a Palestinian state, since they would not be a part of the state of Israel.

"I think that once [a Palestinian state] would be realized, the numbers would be limited to refugees from Lebanon and Syria, and even then, not all of them," Michael said.

Asked about the capacity of a future Palestinian state to absorb a large number of refugees, he said such a state would likely assimilate them in a cautious and gradual manner.

"They will not be able to do it alone, and therefore international aid and assistance is a must," said Michael.

Origin of the refugee issue

The refugee issue was born when six Arab armies invaded Israel during the War of Independence. The Arabs aimed to immediately eradicate the state of Israel following its declaration of independence in May 1948, and to expel the Jews living in the land.

Kedar explained that during the war, many Arabs living in Israel "fled back to their original countries, but were kept in refugee camps by the local states in order to return them back to Israel one day." Today, those Arabs and their descendants consider themselves "Palestinian refugees."

The refugee problem exists not only in Arab states, but also in PA-controlled territory, according to Kedar.

"Even Palestinians from Nablus did not absorb their brethren who ran away [in 1948] from Hadera, in northern Israel, since there is a cultural problem in the Arab world to absorb refugees, even if they are from the same country," he said. "The problem is called tribalism."

Kedar said the PA "is not a solution for anything; it is the problem."