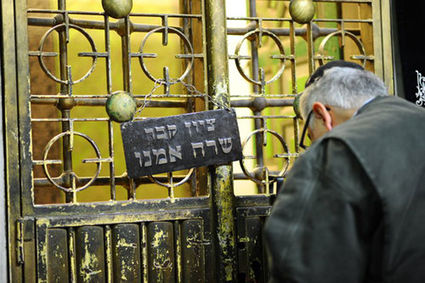 A Jewish man prays at the tomb of the biblical matriarch Sarah in Hebron's Cave of the Patriarchs, Nov. 25, 2016.

An upcoming vote by the United Nations cultural body UNESCO on whether to declare Hebron's Cave of the Patriarchs as an endangered Palestinian heritage site is the latest example of "narrative warfare" against Israel and Jews, legal experts say.

As part of an ongoing Palestinian-engineered diplomatic campaign, an "emergency resolution" UNESCO presented to its World Heritage Committee claims Israel is causing "irreversible negative effect on the integrity, authenticity and/or the distinctive character of the property," which the resolution refers to not as the Cave of the Patriarchs, but as the Ibrahimi Mosque. The Hebron site is where the Jewish patriarchs and matriarchs Abraham and Sarah, Isaac and Rebecca, and Jacob and Leah are believed to be buried.

The vote is tentatively scheduled to take place during UNESCO's July 2-12 summit in Krakow, Poland.

"Anyone who comes to the Cave of the Patriarchs can see that the building is well-maintained, and open for members of all faiths to pray," said Yishai Fleisher, international spokesman for the Jewish community of Hebron, who noted that the site's largest room is reserved almost exclusively for use as a mosque by local Arabs.

Further, Fleisher explained that like the Western Wall, "the Cave of the Patriarchs monument was built by a Jewish king"-King Herod, more than 2,000 years ago.

"Suggesting first, that the site of the burial of the Jewish patriarchs and matriarchs is a Palestinian heritage site, and then suggesting that the site is in danger, is a fraudulent interpretation of history. It is a classic case of the narrative warfare the Palestinians are waging on the Jewish people," Fleisher, a trained lawyer, told JNS.org.

In May, UNESCO's Executive Board passed a resolution denying Israeli sovereignty in Jerusalem. Last October, UNESCO passed two separate resolutions ignoring Jewish ties to Jerusalem's holy sites. Israel needs seven opposing votes in the committee to block the Cave of the Patriarchs resolution. None of the 10 countries opposing May's resolution against Israeli sovereignty are part of UNESCO's World Heritage Committee, which seemingly stacks the odds against Israel in the upcoming vote.

The claims that UNESCO submitted for the resolution included pictures of neglected areas of Palestinian-controlled Hebron that were being passed off as parts of Hebron's small, Jewish-controlled Old City, Israeli Deputy Foreign Minister Tzipi Hotovely noted.

"We have become used to the concept of 'fake news,'" she said. "Well, welcome to 'fake history.'"

Irony of the vote

According to Eugene Kontorovich, a senior researcher at the Kohelet Policy Forum think tank and a professor of law at Northwestern University, the Palestinians are "essentially turning the U.N. specialized agencies into an echo chamber for the most extreme, deranged anti-science claims, and making a laughingstock of the U.N."

"It is particularly ironic that the U.N.'s economic, science and culture organization is taking as anti-science a measure as one can get, because there is no debate amongst historians about the Jewish connection to the Cave of the Patriarchs," Kontorovich told JNS.org. "As a matter of historical science, that is not disputed."

"The Cave of the Patriarchs has been there for over 3,500 years (predating King Herod's monument at the site), so it is very strange that all of a sudden there is an emergency," Kontorovich said.

Kontorovich pointed out that UNESCO has drafted a resolution targeting the one holy site at which members of any faith can openly come to pray, and have for decades.

"It is ironic that this is being treated is an emergency, because what we see is in areas where there is Palestinian or Muslim control, Jews cannot freely access for prayer, such as the Temple Mount, and more acutely, the Tomb of Joseph in Shechem. That would be a true issue for UNESCO to address," he said.

Kontorovich said the "truly shameless part" is that UNESCO is holding the vote in Krakow.

"The place where Jews were killed without a burial in Europe is the place where the Palestinians are going to deny the very first Jewish burial place," he said, adding, "I would hope that the Polish government, that really tries hard to honor the memory of the Holocaust, would not allow the site of one of the largest crematoria in Europe to be used for an attempt to erase Jews from history."

Echoing this sentiment, Fleisher called the vote a "pogrom on Jewish history taking place in Krakow."

While the Oslo Accords call for neither Israelis nor Palestinians to take unilateral actions, the Palestinians "feel that they can do whatever they want unilaterally within the international diplomatic and political scene, without fearing any consequence," Kontorovich said.

"The question is whether there will be any consequences, and what is the Israeli government going to do?" he said.

In May, Israel deducted $1 million from its annual funding to the U.N. following the resolution on sovereignty in Jerusalem. Israel also withheld $2 million from the world body following the passage of anti-Israel resolutions at the U.N. Human Rights Council in March, and cut $6 million in U.N. funding in the aftermath of last December's U.N. Security Council Resolution that described eastern Jerusalem's Jewish holy sites as "occupied Palestinian territory."

Kontorovich said Israel should go further and "cut the last penny to UNESCO," particularly because the U.S. already no longer funds the cultural body. He asked, "How can it be that Israel is contributing to UNESCO, and the U.S. is not?"