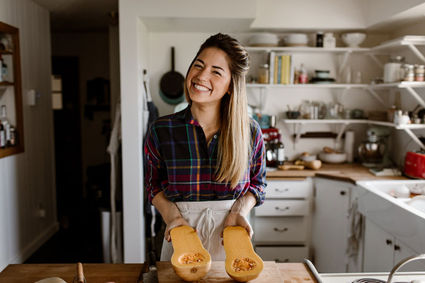 Molly Yeh has taken the food blogging world by storm with her bubbly personality and creative recipes.

(JTA)-Not much could have prepared Molly Yeh for moving from New York City to Grand Forks, North Dakota-a city of a little over 50,000 residents near the state's eastern border with Minnesota.

At the time of her move in 2013, Yeh (pronounced "yay," as her website explains with several exclamation points) was a Juilliard graduate and classically trained percussionist playing professional gigs around New York City. She often hosted concerts in her Brooklyn apartment and enjoyed biking around the city with her then-boyfriend to see how many shows and events they could cram into one day.

She was passionate about food-especially when it came to Jewish staples like the matzah ball soup and hummus she had loved since childhood in a Chicago suburb, where she grew up with an Ashkenazi mother and Chinese father. But her casually updated food blog, which she had started a few years before during a family vacation, was of secondary concern.

When she chose to follow her boyfriend-turned-husband to his family beet farm in North Dakota, food gradually became more of a priority. Newly unemployed, Yeh took a job in a local bakery working a late-night shift. She began to put more energy into her food blog, which then started to gain some traction online. Betty Crocker soon contacted her to contribute recipes.

Four years later, the 28-year-old Yeh is one of the internet's most popular food bloggers, with 245,000 followers on Instagram. Her site, my name is yeh-it uses only lowercase letters as an aesthetic choice-offers a cornucopia of impeccably photographed culinary treats (she also takes all the photos). Many of her creations incorporate foods and ingredients that are popular in Jewish and Israeli cuisine, such as challah, shakshuka, hummus, tahini and shawarma. Some of the entries on her site, such as the scallion pancake challah and hummus dumplings, point to her dual heritage.

Besides the recipes and photos, Yeh is known for her personal, funny and engaging blog voice. She often mentions her husband, Nick Hagen, whom she calls "eggboy" in blog posts, because he used to eat several eggs each day. Sometimes she gives her recipes humorous names, such as the "ex-boyfriend latkes."

Yeh's move to North Dakota kickstarted her efforts to make her work stand out in the crowded food blogosphere, but it also gave her an unexpected narrative that only added to her unique appeal-and gave her a lot to write about. Last fall, she released a book on the whole story  (with plenty of recipes) titled "Molly on the Range: Recipes and Stories from An Unlikely Life on a Farm."

At first, she experienced some "culture shock" in her new North Dakota community, which she called "challah-less" and "babka-less."

"Growing up in the suburbs of Chicago and living in New York, it didn't even strike me as a possibility that a place could really exist without tons of Jews," Yeh said. "If I wasn't going to be maintaining Jewish identity and celebrating Jewish holidays and cooking Jewish food on the farm, nobody was going to be."

She made it her mission to inject some Jewish food and culture into the farm community. Perhaps none of her recipes captured the goal as well as her Hummus With Meat All Over It, which she wrote about in the Forward, a Jewish publication that she occasionally contributes to.

"Question: How do you make a plate of hummus filling enough for a bunch of big burly farmers? Answer: Put meat all over it," she wrote.

The Hagen family quickly took to Yeh's Jewish food-making ways. During her first year on the farm, for example, Passover coincided with Easter-so the family invited her to bake loaves of challah to include in their Easter meal.

"My mother-in-law is a hummus-making machine now," Yeh said.

In turn, Yeh took to the Midwestern flavors she was surrounded by. She now often includes ingredients grown on the farm, such as beets and rhubarb, in her recipes.

She admitted that it can be hard to find ingredients she needs for some of her more unusual recipes-tahini and hibiscus flour were two that she had recently ordered online while speaking with JTA recently from her North Dakota home. She often longs for the array of quirky ingredients that can be found in New York markets like Fairway or Zabar's.

The trade-off, she says, is that in summer she can walk outside and snatch fresh vegetables from the farm, such as cucumbers and tomatoes, to make an Israeli-style breakfast salad.

Reproducing some of her other New York Jewish food staples has been a little more difficult-even for an accomplished chef. Her first attempt at bagels was, in her words, a complete failure. 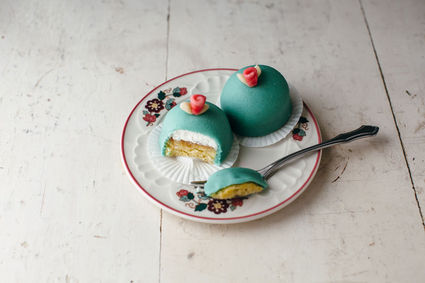 Molly Yeh often incorporates family farm ingredients, such as rhubarb, into her culinary creations. She calls these her Mini Rhubarb Princess Cakes.

"I have no choice, I have to keep going!" she said.