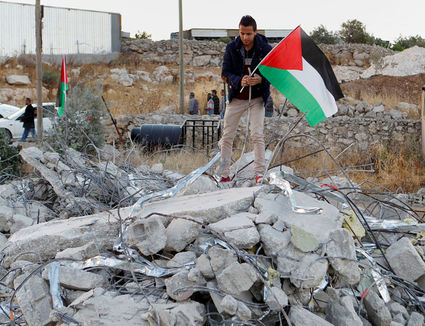 Relatives of a Palestinian suspected terrorism inspect the debris of their house, demolished by Israeli security forces, in the West Bank city of Hebron, June 11, 2016.

JERUSALEM (JTA)-Israel has already defeated the Palestinians. All that's left is for them to surrender.

That, at least, was an argument being made in Jerusalem last week. Led by the Philadelphia-based Middle East Forum, pro-Israel leaders and analysts gathered here to highlight local support for their aim of reframing the Israeli-Palestinian conflict internationally.

"After more than a century, the conflict is really over," Daniel Pipes, the forum's president told JTA. "As an American, I would like my government to say to the Israeli government, 'Do what you need to do to convince the Palestinians they lost.'"

Pipes on Sunday night held an English-language event at the Begin Heritage Center to cheer Tuesday's launch of a Knesset lobby committed to forcing the Palestinians to admit defeat. He said he hoped the Knesset Israel Victory Caucus, along with a public opinion poll he released Sunday to JTA, would help them convince U.S. policymakers to "let Israel win."

In an article in the December 2016 issue of Commentary, Pipes described the things Israel might do to "encourage Palestinians to accept Israel and discourage rejectionism." They include charging the Palestinians Authority for material damage from terrorism; blocking P.A. officials from returning to the West Bank if their colleagues incite violence; quiet, anonymous burials for Palestinians killed attacking Israelis; and shutting off water and electricity supplies to punish violence by Palestinians.

"Inducing a change of heart is not a pretty or pleasant process," wrote Pipes. However, he continued, "Wars usually end when failure causes one side to despair, when that side has abandoned its war aims and accepted defeat, and when that defeat has exhausted the will to fight."

The Knesset Victory Caucus will be co-chaired by lawmakers Oded Forer, from the hawkish Yisrael Beinteinu political party, and Yaacov Peri, a former head of Israel's Security Agency from the centrist Yesh Atid. A total of six Knesset members have so far joined, all from the governing coalition.

The lobby will be the sister organization of the Republican-only Congressional Israel Victory Caucus, whose co-chairs sent supportive statements to the crowd at the Begin Center.

Israeli, American and British speakers took the stage one-by-one to advocate a zero-sum vision of the Israeli-Palestinian conflict: The Zionist project was to build Israel. The Palestinian national purpose was to destroy Israel. Only one side could win, and it had been Israel.

Now, they argued, Israel's allies-most importantly the United States-must dispense with long-unsuccessful peace negotiations and allow Israel to finish the job, by forcing the Palestinians to concede defeat

Despite their shared view of the end of the conflict, the speakers evinced widely divergent worldviews and priorities.

In his opening remarks, Pipes said that by "losing" the conflict, the Palestinians might actually gain even more than Israel because they could "move on to something better, more constructive, built their own polity, economy, society and culture."

Like Pipes, Richard Kemp, the former commander of British forces in Afghanistan, said that ending the Israeli-Palestinian conflict would require changing attitudes in foreign capitals.

But Yehuda Glick, an Orthodox Jewish activist and Knesset member for the ruling Likud party, argued that Israel was responsible for its own destiny. By making itself "a light to the nations," Israel would bring "shalom upon the region and the world," he said.

Einat Wilf, a former left-wing Israeli lawmaker, said she had over time given up on making peace with the Palestinians. She suggested that the conflict would only end when Arabs were forced to reinterpret the role of Zionism in their history.

"We rewrite our lives to turn our defeats into triumphs, right? That's what humans do," she said. "So the Arabs and the Palestinians will one day rewrite their history, their theology to acknowledge the Jewish presence here as part of their view that the Jews came here because that's how it should have been by Islam."

Meanwhile, the poll commissioned last month by the Middle East Forum found that 82 percent of Israelis do not believe the Palestinian leadership will recognize Israel as the state of the Jewish people under any conditions. A plurality of Israelis said this was the biggest obstacle to peace. The margin of error was 3.7 percent.

In his recent book, "The Only Language They Understand," Middle East analyst Nathan Thrall argued that both the Israelis and Palestinians have historically only made concessions when forced to, by either violence or politics. But he said Israel has benefited from the peace process and would be unlikely to push for an end to it, nor would world powers.

"It allows the perpetuation of the status quo. When there's an absence of talks, people start to get restless. The world doesn't want to support indefinite occupation," he told JTA. "It's entirely implausible that the U.S. or the international community are going to adopt a position in support of 'Israeli victory.' It sounds to be like this group is just putting on a show and asking for some kind of rhetorical shift."