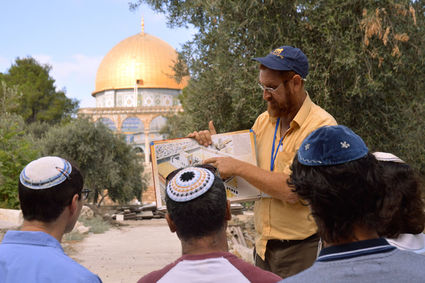 Temple Mount activist Yehuda Glick, later to become a Knesset member, shows religious Jews a diagram of the Jewish temple that once stood where the Dome of the Rock stands today in Jerusalem, Sept. 17, 2013.

JERUSALEM (JTA)-Liberal American Jews are feeling thwarted in their years-long campaign for the right to pray as they wish at the Western Wall. Long frustrated that the plaza in front of the wall is run as an Orthodox synagogue, they were doubly incensed when Israel's political establishment scrapped an agreement that would have boosted access to their own space nearby.

Meanwhile, another group of Jewish worshippers has gained public approval and political traction by setting their sights a bit higher-on the plaza just above the Western Wall, where the ancient Jewish Temple once stood.

Often led by Orthodox American immigrants to Israel, the movement to gain greater access for Jews to the Temple Mount-site of the Dome of the Rock Muslim shrine and the Al-Aqsa Mosque-has moved from the margins nearly to the mainstream.

"Our movement is growing for sure," said Yehuda Glick, a Brooklyn-born Israeli lawmaker and longtime Temple Mount activist. "The number of people ascending to the mount has doubled, and you see there's a lot more activity, a lot more public support."

Yaacov Hayman, a white-bearded Orthodox native of Southern California, has worked for decades alongside other American-Israeli leaders of the Temple Mount movement. He recently took the helm of a new government body called The Temple Mount Heritage Foundation, which is charged with preserving the holy site and educating about its Jewish history.

Hayman cited the American civil rights movement as an inspiration for his activism, which ultimately aims to rebuild the temple and usher in the messianic era. He said the status quo on the Temple Mount, where Jews' access has been limited and Jewish prayer banned, reminded him of the 1960 Louisiana school desegregation crisis.

"When I first went to the mount, I was shocked. This is a Jewish and democratic state, and I can't pray here? What's going on?" Hyman said. "I thought back to being a kid, 6 years old, watching on TV when that little black girl walked into an all-white school. It made me proud of my country."

Glick, whose beard is fiery red, has avoided calls for any kind of violence and framed his advocacy for Jewish prayer rights on the Temple Mount in terms of liberal values, which he said overlapped with Jewish values. Although Glick acknowledged that he also would eventually like to see the temple restored, he was quick to add that it would be "a world center of peace" and a "house of prayer for all nations."

"In a society that believes in human rights and liberal rights, the fact that you're not allowing a person to pray just because he doesn't belong to your religions, that's something that's unacceptable," he said "If you support freedom of speech, how can you support prayer for just one people?"

The Temple Mount has long held religious significance for both Jews and Muslims. Although the Romans destroyed the temple in 70 C.E., Jews have continued to pray facing in the direction of the site, and mourned its destruction on fast days and even weddings with the groom's breaking of a glass. The Western Wall is a retaining wall of the mount, built by the Jewish ruler Herod at a time when Jewish pilgrims would ascend the plateau to offer sacrifices and witness rites led by the kohanim, or Jewish priests.

The Dome of the Rock and the Al-Aqsa mosque were built on what the Muslims call Haram al-Sharif beginning in the seventh century C.E. under the Muslim Ummayad dynasty.

Since Israel captured the Temple Mount from Jordan in the 1967 Six-Day War, the site has become a flashpoint in the Israeli-Palestinian conflict. Some Jews, mostly from the Orthodox national religious community, never accepted Israel's decision to keep the mount an exclusively Muslim prayer site after the war. Although Israel insists it has no plans to change the status quo, Palestinian suspicions to the contrary helped fuel the first and second intifadas, or uprisings, and the wave of stabbings and car-ramming attacks that started in October 2015.

In 2014, a Palestinian terrorist shot and seriously wounded Glick for his Temple Mount activism.

For decades, support for Jewish claims to the Temple Mount came mostly from the fringe of Israel's national religious community. In the most famous example, the Jewish Underground terrorist group plotted to blow up the Dome of the Rock in 1984 to pave the way for the rebuilding of the temple. Orthodox American Jews like Era Rapaport, a Brooklyn-born civil rights activist turned convicted Jewish Underground terrorist, brought liberal ideas even then to Temple Mount activism.

In recent years, however, the Temple Mount movement has surged. According to Yedidia Stern, who researches religion, state and Orthodoxy at the Israel Democracy Institute, Israel's national religious community experienced a series of setbacks in the movement to settle the territories that Israel won in 1967-including the intifadas, the Israeli-Palestinian Oslo peace accords and Israel's evacuation of settlements in the Sinai Peninsula in 1982 and the Gaza Strip in 2005. As a result, many shifted their biblically inspired fervor toward the Temple Mount.

"The settlers' messianic interpretation of reality suffered a real blow to the face with these events. I think most Israeli Jews realized the day will come when we'll either willingly or by force sign a peace accord with our enemies, and we'll have to retreat from Judea and Samaria, the heart of the ancient Jewish homeland," he said, referring to the West Bank by the biblical names widely used in Israel.

"Many Jews have looked to revive the messianic dream on the Temple Mount. It's a replacement, one that's even more important in their minds."

Right-wing rabbis have also issued rulings that permit Jews to visit and pray on the Temple Mount, despite a tradition that says Jews should not walk on the mount out of fears that they might step on the site of the Holy of Holies, the inner sanctum of the Temple.

According to Hayman, just a few years ago, only a few thousand Jews visited the Temple Mount every year. By contrast, more than 14,000 Jews and their supporters have come since October, by the count of the activist group Yeraeh-Connecting to the Temple Mount. That was already more than Yeraeh recorded in the previous 12 months.

At the same time, older groups have flourished. The Temple Institute, co-founded in 1987 by Chaim Richman, an Orthodox rabbi born in Massachusetts, in 2013 moved from a small side street in Jerusalem's Old City to an expansive space just outside the Western Wall plaza, where it has hosted thousands of visits by tourists every year with government support. A man-sized gold-plated menorah the group commissioned for use in the temple was installed overlooking the Temple Mount in 2007 in a ceremony attended by the Ashkenazi chief rabbi at the time.

Temple Mount activists have not just grown in number, but also moved closer to power in Jerusalem. Glick in May 2016 entered the Knesset as a member of the ruling right-wing Likud party. He claimed credit for Prime Minister Benjamin Netanyahu's decision on Tuesday lifting the ban on Israeli lawmakers visiting the mount, albeit on a trial basis. Glick had petitioned the High Court of Justice against the ban, which Netanyahu implemented in 2015 amid Palestinian violence.

In November Dorshei Zion, an annual event that brings together Temple Mount activist groups, was held for the first time at the Knesset and attracted hundreds of attendees, more than ever before. Several leading right-wing politicians, including secular ones, attended.

The new body was explicitly inspired by a controversial UNESCO resolution last October that ignored the Jewish connection to the Temple Mount. The Israeli government called the resolution part of a "delegitimization campaign based on a distortion of facts regarding the history, tradition and culture of the Jewish people." United Nations bodies have issued similar Arab-backed resolutions before and since, including as recently as Tuesday.

Temple Mount activists said Arab and international questioning of Jewish roots in their biblical homeland has helped their movement gain traction with the Israeli public. The perceived attacks have appealed to nationalist sentiment even among the nonreligious.

Tom Nisani, a secular student at the Hebrew University of Jerusalem and the chair of Students for the Temple Mount, and his fiancee, Sara Lu, made headlines on June 29 by covertly marrying on the mount in violation of the ban on Jewish rituals. His group of Jewish students from across the religious spectrum has promoted awareness of Jewish claims to the mount, and ultimately the rebuilding of the temple.

"We certainly do not need to receive permits from the world regarding our right to the Temple Mount," he said. "Every Israeli and Jew has a place on the Temple Mount, and accordingly, the support we receive is extensive and varied."

In contrast with the Temple Mount, Stern noted, the Western Wall has been securely in Jewish hands since 1967. While most Israelis may have opposed the government's decision to withdraw its support for the Western Wall agreement under pressure from the haredi Orthodox political parties, the issue does not resonate on a religious or nationalist level in Israel, where liberal Judaism has not taken root.

But Stern also doubted the Israeli mainstream would embrace the Temple Mount movement's radical long-term aims and the likely costs of pursuing them.

"From a symbolic point of view, everyone says the Temple Mount is ours. It should be ours. You can hear that from almost everyone here," he said. "But does it really mean we have to do anything about it? I'm not sure the majority wants to push forward this agenda." 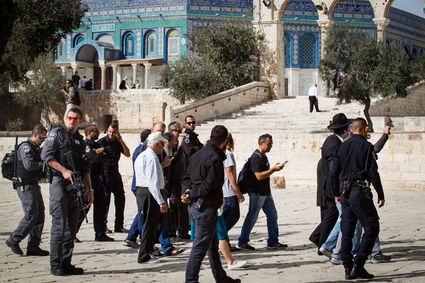 A group of Jewish worshippers visiting the Temple Mount complex in Jerusalem, Nov. 7, 2016.

Hayman acknowledged that force would likely be required to establish Jewish prayer on the Temple Mount, just as the U.S. National Guard had to be sent in to enforce school desegregation.

"They sent National Guardsmen to line the streets. That's what it took to end segregation," Hayman said. "The same thing needs to happen here. Let the Arabs riot over the Temple Mount, and let them get shot. If you ignore the monster, it just gets bigger."

However, he predicted, when it came time to build the temple, even the Arab world would welcome it.

"We have to realize we're not alone in this whole thing. God is our senior partner," Hayman said. "When God wants the temple to be rebuilt, he'll get involved. We'll get to a point in time when the entire world will come say to us, 'build your temple.'"