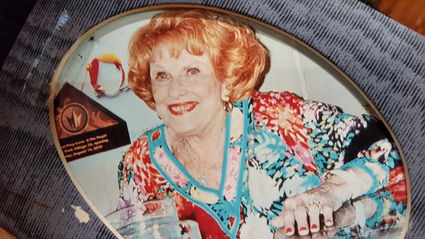 Bernice "Rusty" Sulman was the only child of Ceila and William Frost of Brooklyn, New York. She became a model at the prestigious John Powers Modeling Agency in N.Y. at an early age where she earned her nickname Rusty due to her flaming red hair. She was an excellent student at Brooklyn College until she met Sam Sulman, a southern doctor from Chattanooga, Tenn. After a storybook romantic courtship they married in 1947 and moved to Orlando where Sam opened a medical office and Rusty finished college at Rollins, graduating Cum Laude with a Bachelor of Arts degree. They had a wonderful happy marriage of 62 years, designed and built a lakeside home, raised three beautiful children, kept a kosher home and were active members of the community.

She and Sam danced at the Rainbow Room in N.Y. and traveled the world to Israel, Greece and Russia. While leading a full life and maintaining a successful marriage they were hit by the tragic deaths of their son Charles in a boating accident and their daughter Robin from heart disease. Following back surgery and the loss of her husband, Rusty moved into assisted living. She was blessed with an exceptional daughter, Marjorie Lekach, who was devoted to her in every way.

In addition to Marji, she is survived by a grandson; 3 great-grandchildren; sister-in-law Gitta Engel; her favorite cousins Jimmy and Sandy Siskin; and countless friends. Donations may be made in her memory to any of the organizations she supported in keeping with Jewish tradition.