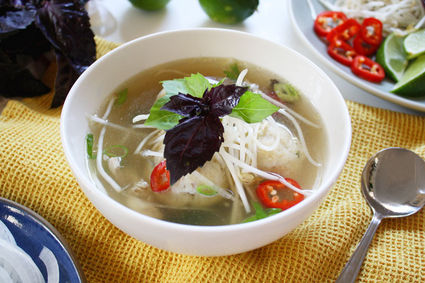 (The Nosher via JTA)-Growing up in Seattle, it's easy to fall in love with pho. Nearly as ubiquitous as coffee shops or teriyaki spots (yes, teriyaki), pho restaurants seem to be just around every corner of the city. They welcome you in from the cold and the rain with their steamy glass windows and equally steamy giant bowls of soup.

Pho (pronounced fuh) is a traditional Vietnamese soup that was popularized around the world by Vietnamese refugees fleeing the Vietnam War and its aftermath. Pho Ga is the chicken noodle variety.

For me, pho is the perfect meal: a big bowl of rich, aromatic, sweet, salty broth filled with satisfying rice noodles and tender meat, and balanced by toppings of fresh herbs, crispy bean sprouts and tart lime juice.

Some feel that any mashup of two differing traditional dishes is a crime against all that is holy in food. I am not trying to provoke traditionalists, but I do believe that learning from other strong culinary traditions can enrich our own.

In that spirit, I started experimenting with homemade pho. It was a revelation to learn that the broth is made by charring onions and ginger before adding them to the stock, the depth of the broth's flavor transformed by their smoky sweetness.

After making pho a few times, it occurred to me that the broth would go well with dumplings. Matzah balls are dumplings by definition. What would happen if they showed up? Why not combine my two favorite soups?

Like traditional matzah ball soup, this dish is nourishing, filling and warming; but its flavors are also complex and unexpected together. The matzah balls are nutty and hearty, in contrast to the simple rice noodles one usually finds in pho. The broth has the spice of ginger, and sweetness of cinnamon and anise-nothing like classic matzah ball chicken broth.

Like any other pho, matzah ball pho can be served as a complete meal in and of itself, which makes the labor of this dish a little more worthwhile. There are enough toppings and additions to make this satisfying to eat, especially served with a side of toasted challah or crusty bread. For all these reasons, this has quickly become a new classic in my home.

Note about the recipe: Traditional Pho Ga calls for fish sauce in its broth. Fish sauce is made of fermented anchovies. Red Boat makes one that is certified kosher, but many who keep strictly kosher will not combine fish and meat in the same dish. To make this kosher, you can use tamari in lieu of fish sauce for extra umami flavor in the broth.

1 large 4- to 5-inch piece of ginger, cut in half lengthwise

2 teaspoons kosher salt, or to taste

For the matzah balls:

To make the broth:

Char your onios and ginger by either placing them on a baking sheet under a broiler for 8-10 minutes or by charring them over a gas flame on your stovetop for a few minutes on each side. The onions and ginger should be nicely charred but still firm-this essential step will deepen the broth's flavor. Once the onions and ginger are charred, remove the skin from the onion. Rinse the onion and ginger, and use a small knife to scrape off excess charred bits to prevent your broth from getting murky.

Cut your chicken into parts, separating the breasts, legs, wings and backbone. This will ensure that your chicken cooks evenly and that the breasts will not become dry or tough when simmered.

In a small skillet over medium heat, toast the cinnamon, anise and coriander until lightly browned and fragrant, about 2-3 minutes. Be careful not to burn the spices. Add the onion, ginger and chicken to a large pot. Fill the pot with 5 quarts of water. Bring the water to a simmer; skim the impurities as they rise to the top.

After 20 minutes of simmering, or once they are cooked through, remove the chicken breasts and allow them to cool. Add the toasted spices, salt and sugar to the pot. Continue to gently simmer the mixture for 1 hour.

Remove the remaining chicken parts and strain the liquid through a fine meshed sieve. Bring the liquid back to a simmer for another 20-30 minutes, or until the liquid has reduced by about a quarter. This step will further deepen the broth's flavor.

While the broth is simmering, shred the chicken meat and reserve for serving. Once reduced, turn off the heat and add the fish sauce or tamari to the broth. Taste, and add additional seasoning if desired.

To make the matzah balls:

While the soup is simmering, in a large bowl whisk together the matzah meal, salt, baking powder and baking soda. Add the beaten egg and schmaltz/oil. Add the scallions. Mix everything together until just combined. Do not over-mix.

Refrigerate the mixture for at least 30 minutes, and up to a day.

Form the matzah ball mixture into even-sized balls. You can determine the size based on your preference, but know that they will double when cooked. It makes it easier to form the matzah balls if you rub a little oil on your hands beforehand.

Bring a large pot of water to a boil. Lower to a simmer and gently drop the matzah balls into simmering water. Place the lid on the pot and continue to simmer for 30 minutes. Once cooked, matzah balls are best stored in their cooking liquid.

To serve the matzah ball pho:

Add the shredded chicken, raw sliced onion and scallions to a bowl. Ladle hot broth into the bowl. Add the matzah balls to the soup.

Serve along with basil, bean sprouts, lime wedges, hoisin and hot sauces. Allow people to garnish and customize their pho to their liking.

Sonya Sanford is a chef, food stylist and writer based out of Los Angeles.

The Nosher food blog offers a dazzling array of new and classic Jewish recipes and food news, from Europe to Yemen, from challah to shakshuka and beyond. Check it out at wwwTheNosher.com.