By Terri Nir
United with Israel

Hamas to Trump: No talks on recognizing Israel 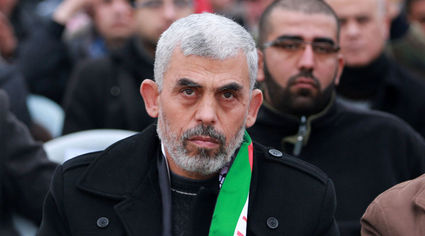 Hamas leader Yahya Sinwar, in a roundtable discussion with youth in the Gaza Strip on Thursday, slammed the Trump administration's demand that it renounce terror and recognize the Jewish state.

Rather than considering peace negotiations, "the discussion now is about when we will wipe out Israel," he declared, according to the Hamas-linked news agency Shehab, Times of Israel reported.

"No one in the universe can disarm us. On the contrary, we will continue to have the power to protect our citizens," Sinwar asserted. "No one has the ability to extract from us recognition of the occupation."

Sinwar's bellicose remarks were made in response to a statement by U.S. Special Mideast Envoy Jason Greenblatt– following the reconciliation agreement between Hamas and Fatah, the ruling party of the Palestinian Authority-that Hamas must renounce terror and commit to peace negotiations with Israel if it wants to play a Palestinian government role.

"Any Palestinian government must unambiguously and explicitly commit to nonviolence, recognize the state of Israel, accept previous agreements and obligations between the parties-including to disarm terrorists-and commit to peaceful negotiations. If Hamas is to play any role in a Palestinian government, it must accept these basic requirements," Greenblatt said.

It was the first statement made by the Trump administration on the Palestinian reconciliation agreement and followedIsrael's announcement Tuesday that it will not participate in peace talks with the PA as long as Hamas refuses to recognize the State of Israel and insists on continuing its terrorist activities. Hamas must also be disarmed as well as return IDF fallen soldiers and Israeli civilians held in captivity, the announcement continued. Among other Israeli demands, the PA must exercise full security control in Gaza and sever ties with Iran.