Israeli women have been saying 'Me Too' for years 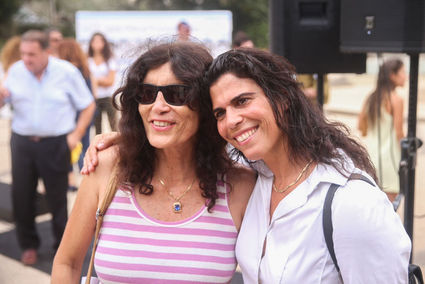 Judo champion Yael Arad, right, posing for a photo in Tel Aviv in 2015, said men have tried to "take advantage of or harass" her three times.

TEL AVIV (JTA)-International fashion model Maayan Keret said she was raped at the age of 12. Since then, Keret said, she has been harassed or assaulted so many times she "stopped counting."

Yael Arad, a silver medalist in judo at the 1992 Summer Olympics, said that despite her "image and physical abilities," men have tried to "take advantage of or harass" her three times.

Knesset member Merav Ben-Ari said male soldiers on her army base verbally harassed her and touched her inappropriately.

These are just a few of the many accounts of sexual harassment and assault shared by high-profile Israeli women in recent days in response to the #metoo campaign launched Sunday on Twitter by the American actress Alyssa Milano. A response to the sexual abuse allegations against Hollywood mogul Harvey Weinstein, the phenomenon spread quickly-in the first 24 hours, there were more than 12 million Facebook posts, reactions and comments about it.

Here, in addition to scores of high-profile Israelis, thousands of ordinary women have added their voices to the accounts of sexual harassment and assault from women around the world.

The Israeli media have highlighted the campaign and the issue of sexual assault. On Monday, Yediot Acharonot, one of Israel's most widely read newspapers, splashed the sexual harassment and assault accounts of six prominent Israeli women-Arad and Ben-Ari among them-across its front page under the headline "Also Us."

As it happens, however, this is far from the first time that Israeli women have said "Me Too"- or "Gam Ani" in Hebrew: A Facebook page called "One Out of One," launched in 2013, has collected nearly 2,500 such testimonies in recent years, the vast majority of them anonymously.

Gal Shargill, a 33-year-old attorney in Rosh Pina, started the page along with feminist activist Shlomit Havron. Their goal was to raise awareness about how widespread sexual harassment and assault are in Israel. The name, much like "Me Too," is a reference to the notion that nearly every Israeli woman has a story to tell.

One Out of One quickly drew national attention. The Facebook page now has more than 40,000 followers and is well known in Israel. Shargill and Havron also run a nonprofit organization of the same name that provides guidance and legal counsel to victims, as well as shares memes commenting on sexual harassment and assault.

Orit Sulitzeanu, the executive director of the Association of Rape Crisis Centers of Israel, credited One Out of One with helping to "pave the way" for the #metoo campaign, which began in the wake of a New York Times story in which dozens of women alleged that Weinstein had sexually harassed or assaulted them.

"Sharing testimonies was not something that took place on Facebook, and they made it possible," Sulitzeanu said. "#Metoo just took what they did one step further with women saying 'here, this is my name, this is my identity, and I'm talking.'"

Some of the first stories Shargill and Havron shared were their own. Shargill said she was raped once and at work was sexually harassed repeatedly.

The two women have also participated in the #metoo campaign, posting supportive messages on the One Out of One Facebook page and working through the surge of testimonials they have received in recent days. Whereas they might get 10 to 20 submissions in a typical week, Shargill said, they have received approximately 30 to 40 since #metoo went viral.

She said they have received similar outpourings during the numerous sex scandals in Israel over the past four years.

Among the recent high-profile cases were a Tel Aviv nightclub owner who was charged with rape or other sex crimes against six women, and a revered army general who avoided charges of raping two women under his command by pleading guilty to having sex with one of them. In December, President Moshe Katsav was released from prison after serving five years of a seven-year sentence for rape and other sex crimes against three women.

Sulitzeanu said sexual harassment and assault are pervasive in Israel, and she put part of the blame on the country's mandatory military service. Young men in the army learn "they're entitled to anything," she said.

An internal study by the Israel Defense Forces this year found one in six female soldiers are sexually harassed during their service, and Sulitzeanu said the nine rape centers that are part of her umbrella group get about 40,000 phone calls every year. According to the World Health Organization, one out of every three women worldwide experiences physical or sexual violence during their lifetime.

But Sulitzeanu, who recalled boys pulling her pigtails and older men groping her in the Old City of Jerusalem market as a girl, said she has seen Israeli attitudes about sexual harassment and assault change for the better in the past few years. She said the the country's embrace of the #metoo campaign reflects this, including the prominent media coverage.

"It's a mini-revolution," Sulitzeanu said. "We're used to security, [Prime Minister Benjamin] 'Bibi' Netanyahu, corruption on the front page. This is the first time ever we've seen something like that."

She said the campaign has further "broken the code of silence" around sexual abuse. Still, Sulitzeanu worries about the many victims of sexual abuse her organization counsels every day who are not able to speak out.

"To see so many famous women, so many strong women in sports, in politics and in the media, make you feel you're not alone-that you didn't do something wrong to be abused," she said. "The problem is we also have to give legitimacy to people who aren't ready to speak up, women as well as men and children."

Shargill said One Out of One would continue to do just that.

"In a week or two, this [#metoo] campaign will be over and people will move on to the next thing," she said. "We will still be collecting testimonies in one place so that anyone can see them anytime."