A Jewish-themed beard balm for hipsters and Hasids 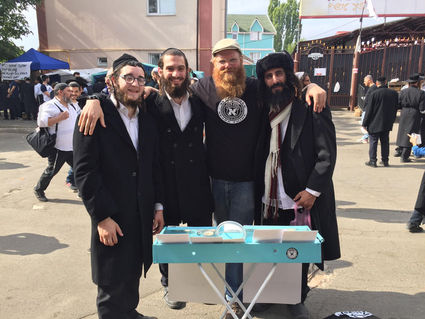 Eitan Press (second from right) says he has "anointed" the beards of hundreds of men, including these Jewish pilgrims in Uman, Ukraine, Sept. 20, 2017.

Press was hoping they would get hooked on his product, an ointment that comes in a variety of Jewish-themed scents, including the popular Sukkot (myrtle, lemon, lemongrass and mint) and Havdalah (clove and cinnamon).

The founder of the Aleph Male beard balm company, Press estimates that he has "anointed hundreds of beards" since its founding in July.

"I've seen how it truly makes men's beards look majestic and smell great," Press, who sports an impressive red beard, told JTA in a phone interview. "It takes a frizzy, scraggly beard and make it look like a smooth, handsome, kingly beard."

Aleph Male beard balms are made in Jerusalem using a base of coconut oil, beeswax, shea butter and Vitamin E oil. Press tries to source as many of the ingredients as possible from Israel. Two-ounce tins of the ointment, which comes in five varieties (including one unscented), cost $20 and can be shipped in Israel or to the United States.

His core audience is "young Jewish Hasidic hipsters," Press said, but he wants to make the product appealing to "anybody who has a beard."

Even the name-Aleph Male is a play on the "alpha male" trope using the Hebrew letter aleph-is about an alternative way of expressing masculinity.

"There's sort of a narrative around not all beard balms, but a lot of the beard balms, of crude masculinity, or the term that is popular today is 'toxic' masculinity," said Press, 40. "To me, the Aleph Male is really about changing the conversation using beard balm."

Many beard balms are marketed with old-time images of men as Vikings, lumberjacks, prospectors and outlaws.

Press, who grew up in Demarest, New Jersey, and became observant after moving to Israel in 2008, says he never related to the "alpha male" cultural ideal.

In the wake of sexual harassment allegations against Hollywood mogul Harvey Weinstein earlier this month, as women were sharing stories of sexual assault and harassment under the hashtag #MeToo, Press shared a photo from the Aleph Male Facebook page with the caption "The Aleph Male respects and honors the feminine."

"This is an example of toxic masculinity, and as a man what can I do to respond to that?" Press remembers thinking. "Part of it is educating men about a higher vision of what masculinity is about."

Press came up with the idea of making a beard balm after a trip last year to Uman, Ukraine, where tens of thousands of Jews make a Rosh Hashanah pilgrimage to visit the grave of Rabbi Nachman, the founder of the Breslov Hasidic movement.

"I was in Uman and saw in the synagogue next to [the grave of] Rabbi Nachman of Breslov, there was a guy praying there, and he had this huge red beard, and I was like 'that guy is inside of me but I'm afraid to be that guy.' And then I just decided I was going to grow my beard," recalled Press, whose full-time job is running a digital marketing agency.

Concerned about making sure he still maintained a professional image at work, Press experimented with making a beard balm at home. The result was a hit among friends and a year later he started selling it. Since then he has sold some 200 cans, split evenly between customers in Israel and the United States. He also recently started selling the balm in a Tel Aviv barbershop.

People aren't just using Aleph Male for beards. Haredi Orthodox men are using the balm to style their sidelocks, and a woman recently told him she was using it on her split ends. Press also sells T-shirts with the Aleph Male logo, and is hoping to expand to beard oil, brushes and grooming products

Besides making beards soft and pleasant-smelling, and providing a new vision for masculinity, Press hopes his beard balm can help show a different side to Judaism.

"A lot of people associate Judaism with this boring religion, whereas Judaism is actually a very sensual religion," he said. "And when I say sensual, I mean being connected to our senses-in terms of tastes, and food, and smell and sounds, the sounds of shofar, the smell of the etrog, the smell of the Havdalah spices."

"We're a very physical religion, and so part of what the Aleph Male scents are about is also educating and highlighting these aspects of Jewish culture."