'The MeshugaNutcracker!' shown one night only in Orlando 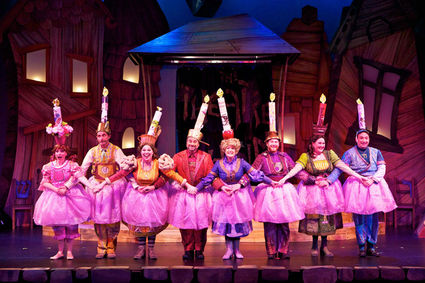 "The MeshugaNutcracker," a madcap mashup of classic holiday ballet mixed with Chanukah history with Tchaikovsky and Klezmer/Broadway tunes.

An "enchanting festival of light-hearted glee and meaningful warmth" (Los Angeles Times) arrives in celebration at the end of Chanukah when the musical comedy, "The MeshugaNutcracker!," debuts in movie theaters nationwide on Tuesday, Dec.19, putting a unique spin on the classic Nutcracker ballet.

During this screening, presented by Fathom Events in partnership with Guggenheim Entertainment, Emmy Award®-winning and Broadway star Bruce Vilanch will appear on screen as a special guest.

Tickets for "The MeshugaNutcracker!" can be purchased online by visiting http://www.FathomEvents.com or at participating theater box offices.

"It's a show that's really never been done before," says Susan Gundunas, one of the stars of the ensemble cast. "Not just because there's finally a big, beautiful show about Chanukah in the same way there are big, beautiful shows celebrating Christmas, but also because the cast is singing an amazing challenging score that was originally intended for musical instruments! We get to sing the piccolo line and clarinet line of melodies you've had in your head forever but that have been wordless for hundreds of years. It's a real treat to sing such melodious, grand music."

"The MeshugaNutcracker!" showcases eight stories that pay tribute to the first celebration of Chanukah in the new state of Israel, as well as Judah Maccabee's triumphant saga and accounts of perseverance. Written and directed by Scott Evan Guggenheim, Shannon Guggenheim and Stephen Guggenheim, the full-length musical comedy features the wonderfully silly sensibilities of the folklore of Chelm (a fictional town of fools), underscored by an invigorating Klezmer-ized orchestration of Tchaikovsky's "Nutcracker Suite." Alongside original lyrics in honor of Chanukah, "The MeshugaNutcracker!" includes dancing dreidels, singing sufganiot and special guest stars bringing audiences delight as they celebrate this holiday season.

"We are always thrilled to embrace the holiday spirit with audiences and celebrate such a special time of year, and this year there's no better way than watching a fun twist on a beloved classic," Fathom Events VP of Programming Kymberli Frueh said. "This performance is a fun way for audiences to learn more about the history and traditions of Chanukah in a kitchy spin, using the Nutcracker's classic music in a way they've never experienced it before."

"No matter what religion you are, no matter what you celebrate this time of year - it's about finding the light in people, finding light in yourself, letting the holidays truly illuminate everything around you," Shannon Guggenheim, lyricist and one of the co-producers, said. "And yes, it does sound schmaltzy but that's why we balance it with a lot of schmaltz in our show! That really is what we're trying to do: give families something bright and fun but also poignant and meaningful to celebrate this time of year."