By Andrea Mandell
his granddaughter 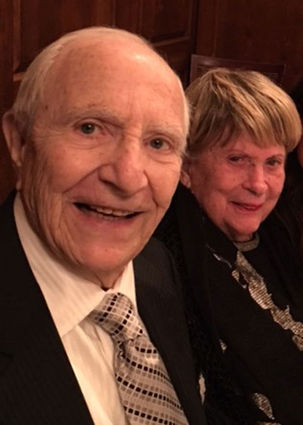 Joseph Hara died on Dec. 24, five days shy of his 92nd birthday. He always likened his life to a Horatio Alger tale, a man who rose from a humble background and achieved success beyond his wildest dreams.

Hara was born in Chicago to a Syrian mother, Rose Beyda and Turkish father, Shabo. Hara was one of nine children, and like many, the family struggled to make ends meet during the Depression.

After serving in the Army Air Corps in the South Pacific during World War II, Hara returned determined to jumpstart his career, beginning as a door-to-door stockings salesman. Eventually he learned of a plastic product called Tupperware through his cousin, Jim, who ran a fledgling Tupperware distributorship.

Hara, now an owner of two children's clothing shops, carved out spare time to help Jim's business, and eventually the two became partners. Soon their distributorship became the most successful in the U.S. and headquarters came calling.

In the pre-Disney 1960s, Hara moved his family down to Orlando, Florida, where he quickly ascended from the role of vice president of sales to president and CEO of Tupperware in three years.

In 1970 he was named president of Tupperware worldwide, with 60 Minutes profiling the success of the company under his stewardship. Hara continued to lead Tupperware for over two decades, through the company's unprecedented era of growth across 35 countries.

He ardently believed in the power of positive thinking and was a relentless champion of women in the workplace. "The truth is that women dominate intellectually," he wrote in 2016. "I have observed this in my economic life, having been exposed to thousands of women who, when made aware there are no restrictions and no limit to what they are free to achieve, do incredible things."

In 1947 Hara married his wife, Anita, whom he adored throughout their 70 years of marriage. They brought joy to the lives of their three children: Robert, Barbara and Mark, their six grandchildren and two great-grandchildren.

Hara was extremely active in Orlando and the Jewish Community, becoming a longtime supporter of JFS, an organization that provides food and counseling to people from all walks of life. Hara was also a champion of The Jewish Federation of Orlando, the Holocaust Memorial Resource and Education Center, TOP Jewish Foundation, Foundation for Blindness, Habitat for Humanity, the Orlando Museum of Art, United Way Human Resources, Friends of Santa Claus, The Jewish Academy, Congregation Ohev Shalom, Kinneret Council on Aging, the Brevard Music Festival, among others. Hara served on many of their boards throughout the years.

Hara was also a recipient of the 2001 Heritage Florida Jewish News's Human Service Award. Extremely magnanimous and humble, "He was the only recipient to call me and say he wanted to pick up the award at the Heritage instead of being presented at the Federation Board meeting," Jeff Gaeser, Heritage publisher, stated. "He also once paid for the unaffiliated in the Jewish community to receive the Heritage once a month for one year," Gaeser further said.

"It was a ball," reflected Hara of his life recently. His adoring family is determined to carry on his legacy of love, laughter and community.