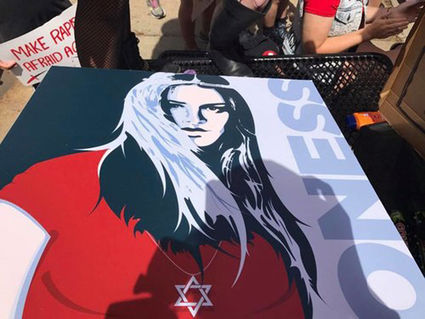 Salt and pepper, peanut butter and jelly, Zionism and progressivism.

Few question the inherent, irrefutable bond between the first two of those pairs, but civil rights attorney and co-founder of the Zioness Movement, Amanda Berman, argues that the latter is just as natural-and she has several thousand left-leaning Jews with strong Zionist identities backing her up on that sentiment.

The four-month-old Zioness Movement was born in a "watershed moment," several months after the inauguration of President Donald Trump. At the Aug. 12 Chicago SlutWalk, which aimed to dismantle rape culture, a group of 20 Zionist progressive friends marched together in support of the rally. But similar to what occurred at the Chicago Dyke March in June, their support was met with a ban on Zionist "symbols of nationalism and oppression."

"It was one of those moments that exposed the fictitious line between anti-Zionism and anti-Semitism," Berman told JNS.

On the same day, 800 miles away in Charlottesville, Va., neo-Nazis marched to "end Jewish influence in America," simultaneously threatening minority groups such as African-Americans, Muslims, LGBTQ individuals and Latinos.

"If that wasn't a moment to come together, I don't know what is," said Berman, who was "heartbroken" by the Chicago SlutWalk organizers' move to dictate which identities are and are not welcome in the progressive cause.

Berman felt attacked and ostracized when Palestinian activists wearing shirts that read "Palestine versus the world" were accepted at the SlutWalk, but her Jewish star was not.

"Palestinian activists were allowed to hold that identity, so why weren't we allowed to hold our identity as Zionist activists? Why such double standards, especially at a march for social justice?" asked Berman.

In October, 50 Zioness members took on the March for Racial Justice, hoping to activate and empower progressive Zionists in New York City, but they were met with a similar sentiment.

"We were told that we don't care about racial justice," Berman said. "That was heartbreaking because we care very much about these issues."

Zioness was created as a civil rights movement that seeks to undermine "bigotry, misogyny, and social and economic inequality," said Berman, who thinks there is nothing revolutionary about coming out as proud, progressive Zionists.

"It's the most natural alliance in the world," she said. "Zionism is the civil rights and self-determination movement of the Jewish people. It's not about Bibi (Israeli Prime Minister Benjamin Netanyahu), it's not about settlements and it's not about occupation. Zionism was a dream of the Jewish people for 3,000 years. Through millennia of oppression, persecution, exile and genocide, we have maintained our hope and dream that we would be able to have a state where we would be protected, and that the state would be in our historical homeland where we have been indigenous for 3,000 years."

She continued, "The manifestation of the Zionist dream is exactly what progressivism is about. It's fighting for your own civil rights and own social justice, your own self-determination, your own right to equality, and to exist in safety and security-and progressivism is the same thing, it's making progress for all of those among us, equalizing the playing field, giving everyone the same opportunity."

Berman shared her hope that "all marginalized communities have same the opportunities to ultimately achieve success in their fight for social and racial justice the same way that the Jewish people did with international recognition of our homeland," and suggested that America could take a page from Israel's playbook as the "most progressive, pluralistic, multi-ethnic and multi-religious country in all of the Middle East." She added that Jews and Zionists "must continue to fight for our rights and our state, which remain constantly under attack."

She spoke of the intersectionality of bigotries, noting, "When anti-Semitism runs rampant, other bigotries run rampant."

"We cannot allow anti-Semitism to go unchecked and expect that we can fight other bigotries at the same time. We have to fight it all together. There's a saying on the left that, 'I'm not free until we are all free,' and that's how Jewish communities sincerely feel," said Berman.

Until Jews "are included in the fight for social, economic and racial justice, and until we are not subjected to political litmus tests about our own self-determination and civil rights in the form of our state in our historic national homeland, none of us will be free," she said.

Berman pointed out that 74 percent of American Jews are registered Democrats and many of them care about sexism, racism, homophobia and yes, Israel. "But if young progressives are forced to choose between supporting social justice issues and their identities as Zionists, then we are going to be in big trouble," she said.

The response to the nascent Zioness Movement has been "unbelievably positive" and "humbling," said Berman.

Zioness member Gloria Einstein told JNS that in the 1970s, she "gave up practicing Judaism" and abandoned her loyalty to Israel "because that was expected of a progressive, anti-war, feminist woman. It was just not okay to be actively Jewish or to acknowledge any loyalty to Israel."

Einstein declared, "I will not do that anymore."

The same week that Einstein attended a workshop of one such progressive organization and felt "the heartbreak that progressive Jews face as one after another organization betrays them and demands that they give up Judaism," she learned of Zioness.

Berman described the emails she has received to thank her for filling the void in which institutional Jewish groups and community organizers were previously "scared to engage in this issue," and for giving progressive Zionists a political home. Women who fought in the feminist movement in the 1960s told her, "I have been waiting 50 years for this."