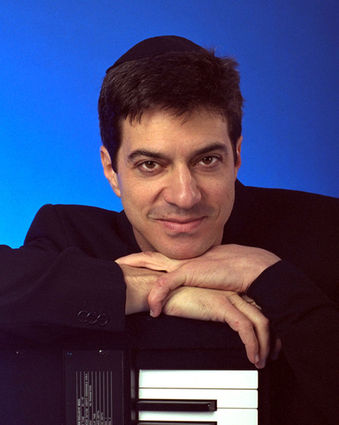 Sam Glaser, one of America's foremost composers, performers and interpreters of Jewish music will be visiting Central Florida Jan. 19-21 as the Artist-in-Residence at Temple Israel and Temple Shir Shalom in Winter Springs. Both congregations invite the community to attend four events: A Reform-style musical service and festive oneg on Friday, Jan. 19 at 7:30 p.m. (no charge); A Conservative-style musical service followed by kiddish and study with Glaser on Saturday, Jan. 20, at 10 a.m. (no charge); a Gala Concert presented by Temple Israel with Temple Shir Shalom on Saturday, Jan. 20, at 7:30 p.m. (tickets for purchase); and a free family concert on Sunday, Jan. 21 at 12:30 p.m.

Glaser was born in 1962 to a Jewish family in Los Angeles and was composing and performing by the age of seven. He recorded his first full-length album by age 11. He graduated the University of Colorado with a B. A. in business and a minor in music. He also attended the Berklee College of Music and the UCLA Film Scoring Program.

Glaser has released 24 albums as well as four collections of lyrics and poetry, four musicals, five sheet music songbooks of his Jewish music and an SATB choral book, "Kol Haneshama." He performs annually before thousands and has toured the world over, and has won Parent's Choice, John Lennon, and International Songwriting Competition awards.

He produces music through his own record company, Glaser Musicworks, as well as producing scores for film and television. He has also produced albums for other recording artists. In 1995, Glaser was appointed music coordinator for the department of Continuing Education at the American Jewish University where he supervised the music curriculum and directed the Cultural Arts program.

Glaser performs for a wide array of audiences, from those in the Reform and Conservative movements to the Modern Orthodox and Chassidim. He has performed at the top Jewish national conventions including General Assembly, Limmid, Central Conference of American Rabbis, Coalition for Advancement of Jewish Education, Cantors Assembly, URJ Biennial, Orthodox Union and Hadassah.

Glaser is gifted in his work with young people. He acted as director of the renowned Yad b'Yad Youth Theater Troupe, music specialist at Camp Ramah, music director for the JCC Macabee Games and as music director for the Brandeis Collegiate Institute. He also frequents religious school retreats, NFTY, USY and NCSY at collegiate Hillel Houses.

Glaser lives in the Pico-Robertson neighborhood of Los Angeles with his wife, Shira, and children, Max, Jesse, and Sarah.

Central Florida is so privileged to see Glaser in concert this year, thanks in part to a grant from the Jewish Federation of Greater Orlando. Visit