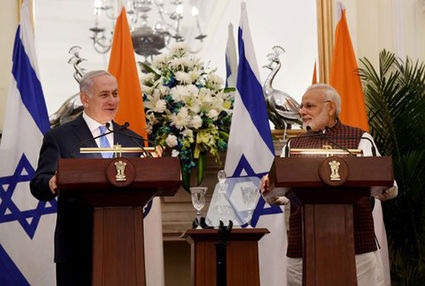 Israeli Prime Minister Benjamin Netanyahu's visit to India is occurring against the backdrop of a massive and still growing river of defense sales and technology transfers from Jerusalem to New Delhi.

Israel's defense industries have been supplying ever-increasing numbers of cutting-edge weapons and platforms to India's military. Last April, Israel Aerospace Industries (IAI) announced a $2 billion sale of medium-range, surface-to-air missile defense systems to the Indian Army. IAI's Barak 8 air defense system, which can detect threats that are more than 60 miles away, is in service in the Indian Navy.

Another prominent development in bilateral defense ties is a $525 million order from India for the purchase of Spike anti-tank guided missiles produced by Rafael Advanced Defense Systems-a deal that was initially canceled by India for reasons relating to the country's "Make in India" policy, but which was reportedly revived shortly before Netanyahu's visit.

"This has been a mutually beneficial relationship," he said. "India has diversified its arms purchases while getting highly advanced weapons. Israel has benefited substantially monetarily... Israel has been a very reliable supplier of military spare parts to India during time of crisis. India has also turned to Israel to upgrade some of its Russian-origin military equipment."

For its first few decades of independence, India, under the direction of former Prime Minister Jawaharlal Nehru and his Congress Party, sought friendlier relations with Arab states and aligned itself with the third-world Non-Aligned Movement, which was often hostile to Israel. Despite a number of similar conditions that surrounded their establishment, India viewed the Jewish state as a proxy of the imperial Western powers.

This approach changed when the end of the Cold War caused Indian leaders to rethink their global strategy, including relations with Israel. In January 1992, India and Israel opened their first bilateral diplomatic missions. Since then, one of the most important aspects of Indian-Israeli relations has been military and defense sales cooperation, with Israel becoming one of the top weapons exporters to India along with Russia and the U.S.

Kaura said that in past conflicts India experienced with Pakistan, such as the 1999 Kargil war in Kashmir, as well as in other conflicts, Israel "has provided India with actionable intelligence that proved very useful for India. India and Israel are cooperating on intelligence sharing and countering terrorism."

Additionally, he argued, "There are many advanced American weapons systems that India could not access directly. India could get these weapons through Israel."

One challenge for Israeli defense firms has been to find ways to work with the Make in India initiative, set up by the Indian government to ensure local production.

Kaura said Israeli firms have been able to work with this policy by forming a growing number of joint ventures with Indian partners. Israel's Elbit Systems, for example, teamed up with India's Adani Group to form Adani-Elbit Advanced Systems, which manufactures drones in India.

"Israel is recognized as a cyber-security powerhouse. It has approximately $6.5 billion of cyber product exports to its credit. India, which has been facing innumerable cyber threats, can benefit a great deal by institutionalizing cooperation on cyber security issues," he added.

One element that is missing is an institutionalized, government-to-government channel to support defense cooperation regarding highly sensitive technologies, Kaura stated. "It is important to set one up," he said. "There are reports that India is planning to ink a Spike anti-tank guided missiles deal through the government-to-government route. This could be a good beginning."

Rafael Advanced Defense Systems, which makes the Spike missiles, told JNS in a statement that it "prides itself in being able to create partnerships with international leading aerospace and defense companies overseas."

As a result, the state-owned company said that it has been keen to create ways to ensure the transfer of Israeli defense technology to India.

"We already work with the different branches of the Indian military and the Indian security apparatus," Rafael said.

Rafael's advanced camera surveillance, ordnance and air defense systems have been integrated into the Indian Armed Forces. "We have done so while maintaining and implementing our strategy to forge local partnerships and address India's Make in India policy," the Israeli company stated.

The list of joint ventures between Rafael and India is expected to grow in 2018.

"A significant work share of Rafael contracts is being manufactured in India," said the company. Rafael has sold the Indian Air Force its Litening precision targeting pods, and in that transaction, has surpassed the contract's expectations of setting up 30 percent of the manufacturing in India, instead going on to produce a "large scope of the pod in India, through a tech tie-up with DEFSYS, located in Gurgaon," according to the company.

Earlier this year, IAI's outgoing president, Joseph Weiss, noted that his company had worked with Indian defense industries and armed forces for the past 25 years "as part of our strategic partnership."

"We continue to stand with our partners in India at the forefront of technology for the defense and security of both our countries," he said.