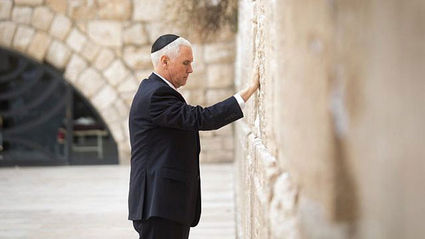 Vice President Mike Pence prays at the Western Wall on Jan. 23, 2018. See other articles about the vice president's trip on page 3A.

(JNS)-Vice President Mike Pence concluded his trip to Israel on Tuesday with a private visit to the Western Wall, one of the holiest sites in Judaism.

"Here, right above us, on the Temple Mount, King Solomon built the Temple," said Rabinowitz as he approached the Western Wall with Pence. "We draw our strength from our deep connection to the land of the Bible and our commitment to the words of the Prophets."

Pence placed a note inside the wall and prayed, while his wife Karen prayed separately in the women's section at the holy site.

Upon his departure from the Western Wall, Pence signed the official guest book, writing, "It is my great honor to pray here at this sacred place. God bless the Jewish people and God bless the state of Israel always." When approached by members of the media, Pence stated that the visit to the site was "very inspiring."

Earlier in the day, Pence met with Israeli President Reuven Rivlin. During the meeting, the vice president reiterated the Trump administration's position that U.S. recognition of Jerusalem as Israel's capital will lead to peace between Israel and the Palestinians.