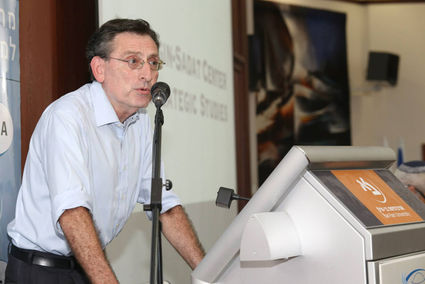 (JNS)-After years of bloody warfare, Syria has become a "Shi'a colony of Iran," a Syrian professor who lives in Germany told an Israeli conference in recent days.

Tibi, a secular Sunni scholar born in Damascus, said the Syrian conflict has been transformed into a sectarian-religious war, adding that this core fact has been missed by many Western observers.

Since the U.S. invasion of Iraq in 2003, Iran has been filling the vacuum "created by the removal of [former Iraqi leader] Saddam Hussein. Ever since, Iran has been expanding its power," explained Tibi.

"Today, there are two blocs in the Middle East: the Sunni and Shi'a blocs. The strongest bloc, even though Shi'as are the minority, is the Shi'a bloc. The Saudis are unable to meet the Iranian challenge. Iran now controls Iraq, Lebanon and Syria," he warned.

Daniel S. Mariaschin, executive vice president and CEO of the B'nai B'rith, who had recently met with Persian Gulf leaders in the United Arab Emirates, said at the conference that due to the Iranian threat, Sunni Arab leaders no longer fear Israel and are potential allies to stop Iran.

"Sunni eyes are opening to the fact that Israel poses no threat, but that Shi'a Iran... aspires to dominate far beyond its borders," stated Mariaschin. He added that significant potential exists for Sunni states to cooperate with Israel on shared concerns.

Despite this positive development, Tibi forewarned that Saudi Arabia, which today is considered to be the leader of the Sunni Arab world, lacked a policy to effectively push back Iran. "Saudi Arabia is not likely to win. But one should support them against the Iranians," he argued.

Professor Hillel Frisch, a Middle East expert who is a member of BESA, said the term "Arab-Israeli conflict" is no longer relevant to describe the region. "It's basically an Israeli-Iranian conflict or an Israeli-Palestinian conflict. The only Arabs that are confronting Israel today are proxies of Iran."

While non-Arab regional powers-Israel, Iran and Turkey-are on the rise, the Arab states are in dramatic decline, he added. "Of course, this was aided by the Americans when they destroyed the Sunni state of Iraq, which was replaced by a Shi'a state," said Frisch.

The Shi'a corridor: Tehran to Beirut

According to Tibi, Iran works with state and non-state actors to take over the region, saying the governments of Syria, Iraq and Lebanon were all under Tehran's control, while non-state armed groups such as Lebanon's Hezbollah, the Houthis in Yemen and the Shi'a militias of Iraq are also members of Tehran's radical alliance.

Professor Benjamin Miller, an expert on international relations from the political-science school at the University of Haifa, also told the conference that Tehran has gained significantly by constructing "a corridor from Iran to the Mediterranean."

He added that introducing democracy to Iraq has "made Iran a key broker" in that country, which has a Shi'a majority of 60 percent.

In Syria, the Alawites, "who are kind of offshoots of Shi'as, are threatened by the 70 percent Sunni majority," he explained. "Iran is their natural protector and ally. This led to the corridor's formation."

The common threat posed by Iran to Israel and Sunni Arab states has "helped to transform relations" between them, maintained Miller.

Meanwhile, the Russian-Iranian alliance-formed to assist the Syrian regime of Bashar Assad and rescue it from collapse-is narrowly built on shared interests, but with no shared identity. Miller believes it's most likely going to end.

The failure of the West

In his address to the conference, Frisch also expressed concern over America's withdrawal from the region, calling it "the major threat that connects between Trump and Obama. From that point of view, they're equal in seeking to withdraw from the role as the world's policeman."

Frisch described Iran as "truly a radical imperial state. The best proof of that is that it's the only state in the Middle East... that projects power above 1,000 kilometers from its border," using it to attack Israel, which harbors no ill will towards Iran.

Iran "keeps teaching us, together with Hezbollah, that they won't do business with us," he added.

Tibi agreed with Frish's assessment, saying the West is failing to meet the Iranian challenge, while also leveling heavy criticism of the 2015 nuclear deal between the world powers and Iran, under which "inspectors can't enter military sites... This must be fixed."

"Iran continues to be successful," he said.

Looking ahead at the future, Tibi shared a bleak picture, saying, "Syria, my home country, is bleeding... there is a term to describe this conflict, which cannot be solved. The diagnosis for the Syrian conflict is: intractable. In the next five years, there will be no solution. Sunnis and Alawites-and the protectors of the Alawites, the Iranians-cannot live together."