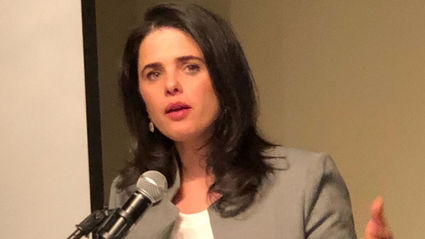 Israeli Justice Minister Ayelet Shaked speaks at an event at the Sixth & I Historic Synagogue in Washington, D.C.

(JNS)-On the margins of the AIPAC policy conference in Washington, D.C., more than 300 conference attendees gathered at the prestigious Sixth & I Historic Synagogue on Monday to express support for the nearly 500,000 residents of Judea and Samaria, also known as the West Bank.

AIPAC leaders did not permit the session on one of Israel's most controversial topics to be included within the conference's vast schedule. Yet the high-profile event was co-sponsored by Israel's Ministry of Strategic Affairs.

The session linked Israeli settlements to multiple topics of strategic importance to Israel, including America's recognition of Jerusalem, the possibility of a new round of negotiations between Israelis and Palestinians, and efforts to delegitimize the Jewish state. While each of those topics was addressed at length in the policy conference, YESHA Council's Chief Foreign Envoy Oded Revivi asked the group: "Why wasn't the establishment of Judea and Samaria invited to address the general assembly?"

Regarding Jerusalem, Israeli Justice Minister Ayelet Shaked thanked U.S. President Donald Trump for "thinking outside of the box," noting that America's official recognition of Jerusalem as the capital of Israel was the "application of American law" and has "legal implications." Yet she also said that while the move is a bipartisan issue of "consensus between Democrats and Republicans who believe the embassy should be in Jerusalem, until Trump, no one did it."

While many of AIPAC's sessions focus squarely on Israel's security threats and the tactics used to keep Israelis safe, Shaked stated that "settlers defend the entire state of Israel."

Minister of Energy Resources Yuval Steinitz, a member of Israeli Prime Minister Benjamin Netanyahu's ruling Likud Party, agreed, stating that "it is impossible from a strategic point of view to defend Tel Aviv, Jerusalem and the coastal plain if Judea and Samaria are in the hands of our enemies. This is a geographical reality."

Steinitz also pointed out that opponents to settlements who attempt to publicly delegitimize Israel for its presence in the disputed territories called out the Boycott, Divestment and Sanctions (BDS) movement, stating that "those who want to throw us from Judea and Samaria want to throw us also from Tel Aviv, Haifa, Beersheva and all over."

"If the BDS movement would succeed, this will be just the beginning," he said. "The BDS movement is not just about Judea and Samaria. It is about the entire Jewish state."

Israel's Consul General to New York Dani Dayan acknowledged the sensitivity of settlements for many Jewish supporters of Israel, expressing his view that "the political argument [of Israel's settlement enterprise] is legitimate," yet suggested that efforts to avoid or boycott Israel or parts of Israel because of political disagreement are "un-Jewish" and represent a form of "bigotry."

For his part, Wilson showered praise on Israel at the pro-settler event, stating, "I'm just so proud of your success. I'm glad to do anything I can do to support the U.S.-Israel relationship."

Israeli Minister of Education Naftali Bennett suggested that the international community will never recognize the legitimacy of Israeli settlements until changes take place in Israeli law.

Speaking about Israel's annexation of Jerusalem following the Six-Day War, he said "in 1967, we acted first and applied Israeli law in Jerusalem. Had we not done that, nobody would have recognized Jerusalem today." 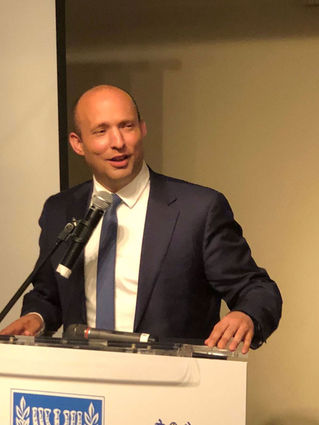 Regarding the Golan (also captured by Israel during the Six-Day War) along Israel's border with Syria, Bennett stated that in 1981, Israeli Prime Minister Menachem Begin "brought a bill to recognize Israeli law in the Golan. And today, the Golan is ours. Forty years later, the Golan is still ours."

He called on America to follow the recent recognition of Jerusalem as Israel's capital and "recognize that the Golan is ours."

"The world does not respect a nation that is willing to give up its homeland. We need to apply Israeli law in Judea and Samaria," stated Bennett.

But the words of Revivi, who also serves as mayor of Efrat, may have summed up the entire discussion: "Jewish communities are not obstacles to peace, but an integral part of the solution for peace in the region."