The House of Windsor's Israel problem 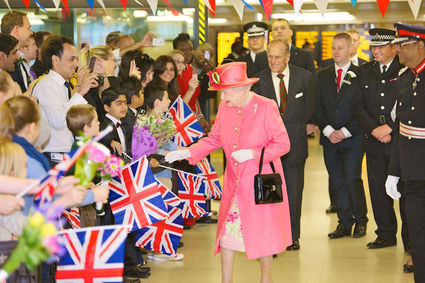 Queen Elizabeth visiting Birmingham in July 2012 as part of her Diamond Jubilee tour.

(JNS)-Queen Elizabeth II is marking her 66th year of reign in 2018, which by any standards is an extraordinarily long time for a single individual to be a head of state. (By comparison, King David is said to have reigned for 40 years, and Queen Victoria-comfortably overtaken now by Elizabeth-managed 64.)

Off the top of my head, I can't think of any current ruler who has remained in place throughout the Cold War and beyond. In that sense, historians will have a grand second Elizabethan era to pour through, one so lengthy that those things that were features of the first half of her reign-ration books, royal family struggles with the Church of England, a snarling punk ditty by the Sex Pistols that rhymed "queen" with "fascist regime"-were misty memories by the time it came to its close in the age of social media.

But for all the momentous historic changes that Elizabeth witnessed from her vantage points at Buckingham Palace, Windsor and Balmoral-changes that were often blessed with royal visits, high honors, state banquets and so forth-one country went stubbornly unacknowledged: Israel.

Now that Elizabeth's grandson, Prince William, has announced a first-ever visit by a British royal to Israel, in addition to Jordan and the "Occupied Palestinian Territories," it is perhaps time to reflect on the relationship, or absence of one, between the House of Windsor and the Jewish nation.

Part of the delight around William's impending visit stems from the fact that few people see the royal family as a political entity anymore; getting a visit from a Windsor, the son of the iconic Princess Diana no less, is a moment for one's national pride to swell in the glow of royal approval. When Elizabeth visited post-Communist Lithuania in 2006, the BBC reported on the cheering crowds in the capital, Vilnius, waving their own flag alongside the Union Jack. One might imagine that Israelis, having emerged from a similar history of turbulence, would have appreciated a similar opportunity.

The point, however, is not simply that the Queen made Lithuanians feel good about themselves. In a speech to the Lithuanian parliament, she saluted all the Baltic nations in explicitly political terms. "You have emerged from the shadow of the Soviet Union and blossomed as sovereign states, taking up your rightful places in the international community and as respected members of the European Union and NATO," she remarked. "It is a transformation-political, economic and social-for which there are few parallels in the history of Europe."

Words like these could have been heard in the Knesset in Jerusalem. They should have been. But as far as the Queen and her close relatives were concerned-including her husband, the Duke of Edinburgh, whose mother, Princess Alice of Battenberg, saved Greek Jews from the Nazis and is interred on Jerusalem's Mount of Olives-Israel may as well have not existed.

To entirely pin the blame for this unsettling indifference toward Israel on the Arabists at the British Foreign Office, who have been in a state of penance ever since the Balfour Declaration of 1917, would do Elizabeth a great disservice. True, unlike her forebears, her divine right to rule has been severely tempered by the more modern rule of law. But that manifestly does not mean she is a plaything of the British government, blissfully unaware of the soft power and international legitimacy that a royal visit grants.

The bald fact remains, then, that a monarch who was crowned when the wounds of the Holocaust were still fresh, who witnessed at least three attempts by Arab states to eliminate the Jewish state and who always maintained a cordial relationship with Britain's Jewish community, never asserted the importance of a visit to the land where Christianity was born.

Yet she made her way to Germany in 1965, at a time when most Britons could still remember the Luftwaffe's decimation of cities like Manchester, Coventry and London. Most of the Middle East's autocracies-Saudi Arabia, Sudan, Qatar, Iran under the Shah, Turkey-received a visit, too. There are few major democracies or Western allies that have not received one.

It beggars belief that the shrewd Elizabeth has not herself recognized this anomaly, and for whatever reason, has willingly complied with a stance of pretending that Israel doesn't exist. Even if one could make a realist case that a visit to Israel during the mid-1970s would have been unwise in the face of the Arab oil weapon, what held the royals back in the comparatively more peaceful times of the late 1990s? When Arab leaders and the leaders of Israel's former Communist enemies can and have made the trip, why has Elizabeth not done so?

Perhaps we shall discover the reason in a diary fragment that emerges in future years. Or perhaps it will always remain an odd secret that will be largely forgotten a decade from now. Because at that point, if all goes to plan and barring a scientific miracle, the Queen will have been replaced by King Charles III. Prince Charles, you see, and not William, is Elizabeth's direct heir, and coincidentally, has never paid an official visit to Israel either.

William will, I am sure, say most of what needs to be said when he arrives in Israel in May. But as you listen to him, do remember that his grandmother should have said exactly the same a long time ago.