Alan Dershowitz on Israel at 70: 'A Light Unto the World' 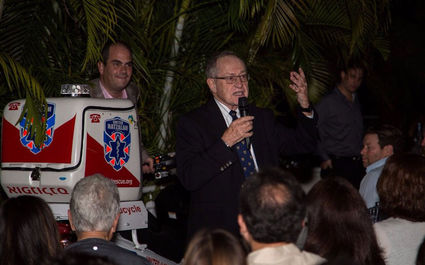 Alan Dershowitz speaking at a ceremony highlighting his donation of a ambucycle to Israel's volunteer medic organization, United Hatzalah.

(JNS)-Ahead of Israel's 70th birthday in May, longtime Harvard University law professor, attorney and author Alan Dershowitz announced that he is donating an ambucycle to Israel's volunteer medic organization, United Hatzalah, in honor of his 80th birthday.

JNS interviewed Mr. Dershowitz about this gift and to hear his thoughts on Israel at 70-and what the next seven decades might look like.

Q: What prompted you and your friends to donate an ambucycle to United Hatzalah for Israel's 70th?

A: There is a group of guys I've known since kindergarten. We've known each other for 75 years, more or less. And we try to spend several weekends a year together and try to get together on New Year's Eve. We all went to yeshivah in Borough Park in Brooklyn together. We all went different ways, but we are still very close. We are turning 80 this year, and we thought it would be nice commemoration of our birthdays to do something that saves lives, and I can't imagine a charity more worthy than Hatzalah. It has led the way in quick availability on the scenes of acts of terrorism. And so we all agreed to make contributions and to dedicate this ambucycle on Yom Ha'atzmaut [Israel Independence Day].

Q: What else are you doing to celebrate Israel's big year?

Q: What do you think of when you reflect on Israel at 70?

A: No country in the history of the world ever contributed more to the welfare of humankind in such a short period of time than Israel. Hatzalah is a perfect representative of that. In Hatzalah, you have Jews and Arabs, Christians and Muslims, atheists, religious and secular, people living in the territories all working together to save lives. It represents the best of Israel. People call Israel the startup nation, and I call it the life-saving nation. Israel has saved lives through its medical technological breakthroughs, through its agricultural breakthroughs and through its pharmaceutical breakthroughs. Israel saves more lives in teaching the world how to prevent terrorism, in teaching the world how to absorb immigrants... Israel has really been a light unto the world for 70 years, and I think it's important to commemorate and look forward.

Q: How do you define the U.S.-Israel relationship at this point in time?

A: It couldn't be stronger. It's very, very positive, but there are trends that are quite dangerous-trends among young Democrats [turning] away from Israel pose risks to the bipartisan consensus in support of Israel. And that's why I remain within the Democratic Party-to try to strengthen the Democratic Party's approach to Israel. But it's a real challenge.

Q: What are Israel's current challenges at 70 years?

A: I think the biggest challenge is Iran, both a nuclear Iran and [Iranian-supported] Hezbollah to Israel's north. Another challenge facing Israel-one that is really Israel's domestic problem-is how to resolve disputes between the haredi community and the modern Orthodox community, and the secular community. That is a very, very serious issue. And number three: how to make peace with the Palestinians, to make some kind of compromised peace with the Palestinians. Those are the issues facing Israel today.

Q: As a legal expert, can you comment on the current status of the Taylor Force Act, and what impact you hope it will make regarding the United States and the Palestinians?

Q: What is your take on Netanyahu's legal woes?

A: It's very important for [Israeli Prime Minister Benjamin] Netanyahu to be able to continue with the work he's doing in terms of diplomatic successes on behalf of Israel with China, Russia, with South Africa and Africa, and I strongly oppose what I call the criminalization of political differences. If people don't like what Netanyahu is doing, then they will vote against him. But the idea of turning what he's done into crimes is very antithetical to democracy, and I'm strongly opposed [to it].

Q: What are your hopes for Israel's next seven decades?