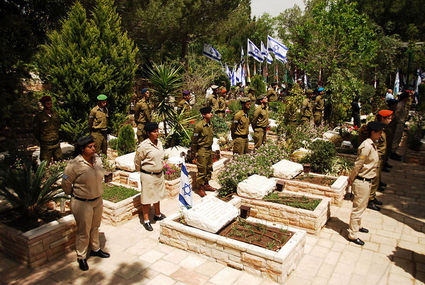 Israeli soldiers at a ceremony on Mt. Herzl in Jerusalem.

(JNS)-If you've ever been in Israel for Yom Hazikaron-the Memorial Day for those who gave the ultimate sacrifice for the Jewish homeland-chances are you will never forget it.

Even if you somehow miss the official ceremonies honoring the fallen, there's no way to sleep through the siren sounding across the Jewish state at 8 p.m. and then again at 11 the next morning. At that moment, Israelis everywhere freeze in mid-air-mid-bank deposit, mid-math lesson, mid-email or mid-carpool-while traffic screeches to a halt, and folks climb out of their cars and stand completely silent.

Both instances represent a long minute of stillness in a country not known for its reticence, when the entire nation of Israel stops to remember the 23,632 soldiers and security forces who have given their lives to defend the State of Israel.

Unless you are Israeli or related to someone who gave their life for their country, you might not see the bereaved parents, brothers, sisters, widows and orphans who gather every year at Mount Herzl on this day to mourn and reflect at the gravesites of loved ones.

The Mizlavi family is among the throngs who congregate there every year to pay their respects to brother-uncle-cousin Tzadok Mizlavi, a 28-year-old graphics artist at The Jerusalem Post who was killed in the Yom Kippur War in 1973.

"Most Israelis have lost someone," says his younger sister, Tzadika Mizlavi. So when asked to participate in a new project to honor the 23,632 for Israel's 70th anniversary this spring, Mizlavi, a teacher at the Shulamith School for Girls in Brooklyn, N.Y., was quick to say "yes."

"Not only is it special for me, but we really want our girls to understand the sacrifices made so we could have Israel," says Mizlavi, who was 24 when her brother was killed. "I'll never forget my father saying at the shiva: 'May he be the last to die.' "

This year, in addition to established traditions, a new way exists for Jews around the globe to honor these fallen heroes. By this Yom Hazikaron on April 17-18, each one of the 23,632 should have at least one kind or sacred act done in his or her memory.

Launched in February, "Yizkereim: Honor Israel's Fallen" (Yizkereim is Hebrew for "remember them") has already collected more than 21,000 acts of chesed ("kindness"), be it public service, prayer, Torah learning or tzedakah ("charity") by a Jew somewhere in the world in the memory of the fallen.

A project of the international Jewish outreach organization Olami, in partnership with the Afikim Foundation and Israel's Ministry of Diaspora Affairs, Yizkereim is designed to "keep each soldier's memory alive with positive actions done in their memory," says Karen Hochberg, who runs community programming for Afikim. "I'm so impressed with the creative and caring actions people have already performed."

When they're posted on the website (www.honorisraelsfallen.com), bereaved families can read about these acts done in their loved one's name. And hundreds of them, Hochberg reports, have asked to be connected with the Diaspora Jews who are honoring their fallen soldier.

Though many of these good deeds are planned, Steven Grutman's tribute to Shlomo Ashkenazi was a spontaneous one. Strolling through the streets one afternoon in Washington, D.C., the University of Maryland junior spied a man who appeared homeless and hungry. "I told him I was going to get some dinner and did he want to come with me." The man quickly accepted, adding that he'd never eaten Mexican food before but was willing to try.

Over dinner, the man said he'd been out of work for a few years. "And he loved the Mexican food," adds Grutman. "Feeding him felt like the right thing to do in this soldier's memory."

To date, some 190 schools, congregations and groups had signed on to the project, and more than 21,000 positive actions have been performed or pledged in soldiers' memories. Hochberg's goal: "To use each act of goodness to keep their memories alive."

As part of the effort, the schools receive a film, banners, a poster and yahrtzeit candles. In addition, each act of chesed leaves a "lit" virtual candle "burning" on the website. A culminating event for "Yizkereim: Honor Israel's Fallen" is scheduled for Yom Hazikaron, on April 17 at the Queens Museum in Queens, N.Y., the same building where the United Nations voted to approve Israeli independence back in 1947.

Rabbi Joel Landau of San Francisco's Adath Israel Congregation had an extra motivation for pledging his congregants to honor 100 fallen soldiers: He served in the Israel Defense Forces in the 1980s and saw friends die for the cause. "But besides my personal connection, I believe Israel is the land of all Jews, and these are our boys who died for our homeland. They paid the price for all of us, so we owe them a huge debt of gratitude."

It's especially powerful, adds the rabbi, when families take on the project together, "when it's not their teachers or their rabbi, but their parents showing how important Israel and these heroes are by doing something meaningful as a family in their memory."

At 37, Olami COO David Markowitz is too young to recall most of the wars that resulted in these casualties, but old enough to appreciate the impact their sacrifice has on contemporary Jewry. And, like other Olami partnership programs-connecting 25,000 students and young adults to Jewish engagement, learning and practice each week-the Yizkereim campaign is also active on college campuses. "When we get to know about our fallen soldier's life and then we grow ourselves in some way Jewishly to honor him, it pulls Diaspora Jews and Israelis together," says Markowitz. "It reminds us that we're one people."

To maximize participation, the website has been translated into Russian, Spanish and French, along with Hebrew and English.

This project is a rare opportunity for Diaspora Jews to honor Israelis who've made the greatest sacrifice, stresses Michal Nordmann, a Tel Aviv mother of three who moved to Israel five years ago and now directs communications for Olami. "When we lived in America, there was no siren on this day, no ceremony where we could sing "Hatikvah" with a thousand other Jews," she says. "These soldiers gave up their lives not so we'd have a nice place to vacation, but so we would have our ancient homeland back-a place that all Jews around the world can call home."

Educator Mizlavi of New York says that "to have a Jewish teen in America doing something in the name of our brother so many years later, it means so much. None of us ever dreamed something like this would happen."

To sign up your family, school, club or congregation for Yizkereim, visit: honorisraelsfallen.com.