Miller seeks seat in US Congress 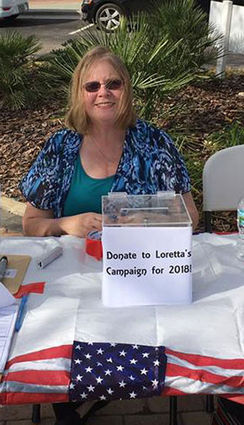 Meet Loretta Miller. She is a Constitutional Republican running for Florida US Representative, District 15.

"We need a strong representative who is not in the large corporation's pockets," she stated in a straight-forward manner. "The people of Florida are sick and tired of our representatives voting for what big corporations want."

What will she fight for? Straight and to the point she states: "We need jobs. We cannot rely on the tourist industry. We need to produce, manufacture, improve education, and make English the official language of the country and protect our citizens. We need to educate those in English who claim they do not speak English."

Miller also sees the bigger picture. "I am for everyone," she said. "When elected, I will fight not only for District 15, but for all of Florida and the United States."

Miller will also fight passionately for better Medicare coverage. "I watched my husband die in my arms for lack of medical care on Medicare. I understand how the elderly are struggling on Social Security without a decent cost of living increase and now the congressional right-winged Republican members are in the process of trying to eliminate Medicare and Social Security all together, stating it is an 'entitlement program,' which will leave the elderly and the disabled on the streets without food and medication."

Miller, who resides in Clermont, is originally from Philadelphia, Pa., She moved to Wellington, Fla., with her husband, Jordan M. Miller, VMD, who passed away shortly thereafter. They have one son, Marcus, 39, who has his master's degree in business and is currently in a doctoral program.

Miller's political and business background is diverse. She took both business management classes as well as political science on the suggestion of the late Senator John Heinz. She was a radio hostess on WPDR in Wisconsin; a radio guest many times on the Harriet Lehrman Show on WPDR; was also a radio hostess on Tea Party.Org blog talk radio; and she also had her own Blog talk radio show called I'm Listening America.

Miller is a life time member of  Na'amat, Hadassah, and ZOA,  and she supports and donates to the Chabad of Orlando.

Miller has lived in Israel, where she worked as a farmer on a kibbutz. She is also a former IDF officer and served in the Yom Kippur War. "I understand foreign affairs," she said. "I understand radical Islam and terrorism whether it is domestic or foreign. I have seen what radical Islam and terrorism has done and how it affected the Middle East. What happened at The Pulse Nightclub was terrorism and not a lone-wolf incident and will not be tolerated by me."

Miller welcomes any and all contributions to her campaign. To donate, please visit her website, https://electloretta millerforcongress.com/donation