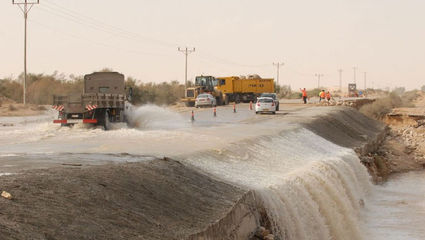 Scene of disaster during flooding in Israel's south.

(JNS)-The death toll from flash floods that hit a group of teenage hikers in southern Israel Thursday rose from nine to 10 after a body found overnight was identified as the last missing teen Friday morning.

The ten victims, nine girls and one boy of around 18 years old, were killed during a field trip Thursday during flash floods that pummeled Israel. A group of 25 students, ages 17 and 18, who were accepted to the Bnei Tzion pre-military academy in Tel Aviv for the coming year, were hiking in the Judean Desert along the Nahal Tzafit riverbed trail, that empties into the Dead Sea.

Fifteen other students missing for several hours, were rescued during a massive search and rescue operation that included Israeli Police, the Air Force's 669 rescue team and a regional search and rescue unit. Two were lightly wounded.

Israel's Ministry of Education claims that it was not made aware of the trip, as per protocol. Its director has been arrested for suspected negligent manslaughter.

Minister of Education Naftali Bennett said in a statement, "A heavy tragedy has struck the state of Israel. Our hearts are with the families of the teenagers who found their deaths in flash floods in the south," while adding that "the Ministry of Education will continue, over the coming hours and days, to closely escort the educational staff in the schools the students attended."

Bennett also thanked the search and rescue teams "for their determined work to rescue the boys and girls." 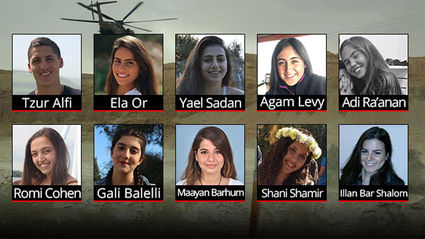 Prime Minister Benjamin Netanyahu wrote on Twitter, "The state of Israel grieves the promising young lives that were cut short by this tragedy in the Arava [Desert Region].  We embrace the families in grief, and pray for the speedy recovery of the wounded."

In Israel, rivers fill up with water during the winter rain season, which typically ends around the Passover holiday. The river had been dry for several weeks before unseasonable torrential downpours struck the country on Wednesday and Thursday. During heavy rains, the water in the rivers can rise quickly leading to flash floods. Hikers are warned to steer clear of riverbeds during inclement weather, when they can be notoriously dangerous. When dry, riverbeds are popular hiking destinations.

Two Bedouin teenagers were killed in separate incidents during floods on Wednesday.