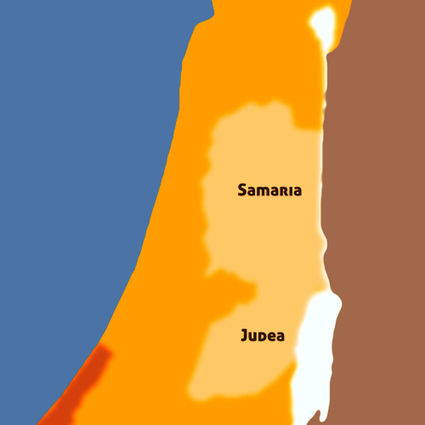 Map of Judea and Samaria.

In a US State Department annual report on human rights, the controversial term "occupied" was largely eliminated in references to various territories in and adjacent to Israel. While the term "occupied" had been used in such reports since the Carter administration, the 2017 version drops this term, which is generally used pejoratively to criticize Israeli policy following military victories through which the Jewish state acquired control of various territories.

Whereas previous publications of the report on human rights had a section on "Israel and the Occupied Territories," this year's document refers instead to "Israel, Golan Heights, West Bank and Gaza."

In addition, the report contains a new note about the status of Jerusalem, in light of President Trump's decision on Dec. 6, 2017, to recognize Jerusalem as the capital of Israel. It states that "issues primarily related to Israeli residents of Jerusalem are covered in the 'Israel and the Golan Heights' section. It is the position of the United States that the specific boundaries of Israeli sovereignty in Jerusalem are subject to final status negotiations between the parties."

The change comes after US Ambassador to Israel David Friedman advised the department in December to stop using the "misleading" term "occupied" in references to Judea and Samaria.

At the time, Friedman remarked in an interview, "I think the settlements [in Judea and Samaria] are part of Israel," which "was always the expectation when [UN] Resolution 242 was adopted." He added, "The 1967 borders were viewed by everybody as not secure. There was always supposed to be some expectation of [Israeli] expansion" into Judea and Samaria.

"It is about time that the State Department stopped referring to land in Israel as 'occupied territories,'" said Mat Staver, founder and chairman of Liberty Counsel, president of Christians in Defense of Israel, and founder and president of Covenant Journey. "I applaud the Trump administration for this welcome change. The media often uses terms like 'occupied territories' and 'refugee camps' to delegitimize Israel. Most people hearing the words 'refugee camp' visualize a makeshift tent city, when in reality these places are established neighborhoods with businesses and schools. I am pleased the State Department has eliminated the derogatory and false term 'occupied territories' language," said Staver.

The term "occupied" is considered by many to be a loaded phrase intended to demonize Israel with regard to its activities in disputed areas. According to policy expert Dan Diker of the Jerusalem Center for Public Affairs (JCPA), "Friedman is advancing Trump administration policy to correct past mistakes and misconceptions of American diplomats. Since the Oslo Accords in 1995, the most densely Palestinian populated areas in the territories are designated as 'Area A' and 'Area B,' which are under Palestinian autonomy, and are certainly not legally occupied."

Mark Zell, who heads Republicans in Israel, commented to World Israel News in December that "Ambassador Friedman is fighting back against bureaucratic inertia and State Department Arabists."

In response to the State Department's subsequent change in terminology, Israel's Defense Minister Avigdor Liberman tweeted over the weekend, "The lie of the occupied Palestinian territories begins to be revealed. They say that a lie repeated often enough becomes true, but the truth is forever stronger. The State Department report is proof of that."