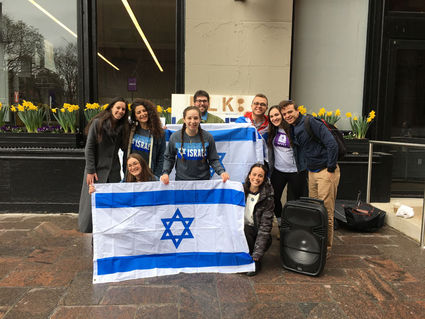 One person shouted at an organizer of Thursday's event who was draped in an Israeli flag, and someone else criticized the group for a poster featuring a quote by the Rev. Martin Luther King Jr. praising the Jewish state, but there were no major disruptions.

The relative lack of negative reactions put things in perspective for Adela Cojab, a Jewish student leader on campus who said a recent resolution signed by over 50 student groups pledging support to the movement to boycott Israel had made it "the worst week of my life."

"Watching people who walk by and smile reminds me that a list of 50 clubs sounds really big, [but] in a school this big, most people have no idea that this is happening," Cojab, 21, told JTA on Thursday.

Last week's resolution, signed by 53 student groups among the some 300 on campus, was spearheaded by the NYU chapters of Jewish Voice for Peace and Students for Justice in Palestine. In addition to calling on the university to boycott companies that do business with Israel, the groups also pledged not to co-sponsor any events with two Israel advocacy campus groups-Realize Israel and TorchPAC-as well as eight off-campus groups, including Birthright-Taglit, the American Israel Public Affairs Committee and the Anti-Defamation League.

The NYU resolution is part of a campaign on college campuses by BDS activists to isolate Israel and its supporters. On Wednesday, the student government at Barnard College, a women's college affiliated with Columbia University, said that nearly two-thirds of students voted to ask the administration to divest from eight companies doing business with Israel.

Both Barnard and NYU have large Jewish student populations, suggesting to some that the tide against Israel has swelled even-or precisely-at campuses that should be friendly to Israel.

But the reality is more nuanced. Following the resolution's publication Cojab, who serves as president of Realize Israel, described the atmosphere on campus surrounding Israel as "one of animosity." But at Thursday's event, she felt relief.

"The climate that exists is mostly among the activism community and the students who are highly involved in campus life," Cojab said.

The NYU administration criticized the resolution, whose signatories included groups such as the Asian American Women's Alliance, the Black Students Union and the Muslim Students Association. A university spokesman said that boycotting student groups "is at odds with our traditions and values," and NYU President Andrew Hamilton denounced BDS at a public forum on Friday. (He had previously said in 2016 that the school would not acquiesce to a demand by its graduate student union to cut its Israel ties.)

Gabe Hoffman, who serves as treasurer for Realize Israel, believes that many of the groups who signed the resolution have overlapping membership.

"I still think it's a group of 15, 20, 30 students that are running 50 groups on campus and it's kind of their choir, and their echo chamber doesn't like our echo chamber," he said.

Hoffman, 21, said that despite the resolution, he is comfortable identifying publicly as Jewish and pro-Israel on campus.

"Once this protest came out, I feel like I have to hold my tongue in some places," she said.

Between handing out cookies and singing along to Hebrew songs, Brustman said she was nervous there would be a confrontation at the Yom Haatzmaut event.

"There definitely is a pit in my stomach right now," she said.

Earlier this month, the NYU student government passed a resolution urging the university to look into its policies at a program the university runs in Tel Aviv. The resolution cited an Israeli law enacted last year that bans entry into the country for foreigners who call for a boycott against Israel and said that members of NYU's Jewish Voice for Peace and Students for Justice in Palestine would be affected by the law.

Two of the resolution's signatories-the Asian American Women's Alliance and Brownstone Publication, a black student publication-said they decided to sign the resolution because they sympathized with the struggles of Palestinians.

The Asian American Women's Alliance was approached by the resolution's sponsors and invited to learn more about the struggles of Palestinians, Vice President Julia Yuge told JTA in an email.

Yuge said her group "learned that the Israeli state systematically violates Palestinians' rights under international law, including the right to education." In her group's decision to sign the petition, she also cited the fact that academic bodies-including the Association for Asian American Studies and the National Women's Studies Association-have endorsed boycotts of Israel.

"There are many ways in which Asian-American women relate to their human rights being stripped away, such as the incarceration of Japanese Americans during World War II," Yuge added.

Brownstone Publication said it decided to sign the petition because it supports "the liberation of all people."

Jenny Labovitz, a Realize Israel board member, said the point of the Yom Haatzmaut celebration and similar events was to show pro-Israel students that there are others who share their opinions.

Even so, fellow group member Esther Bildirici, 20, said she did not generally feel comfortable speaking about Israel in class.

"Somehow it became the cool thing to do, to be anti-Zionist on the college campus," Bildirici said. "In school or in class, I have a very hard time ever admitting that I've been to Israel and I've studied in Israel."