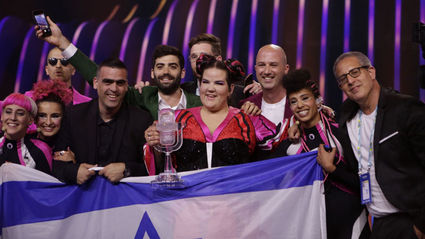 (ISRAEL21c)-Throughout her 25 years of life, Netta Barzilai was told over and over that she wasn't pretty enough or smart enough or skinny enough to accomplish what she wanted in life. Last night she proved them all wrong.

Smart, sassy, zaftig Barzilai did Israel proud, winning the 2018 Eurovision Song Contest in Lisbon as the representative of her country.

This was the first time Israel has won the competition in 20 years.

Long favored by the Eurovision betting charts, and a serious fan favorite, "Toy" has become an international hit for its #MeToo theme.

The refrain, "I'm not your toy, you stupid boy" sends a serious message about sexual harassment while quirky clucking noises and dance moves keep the song lighthearted and fun.

And the line "Wonder Woman don't you ever forget, you're divine and he's about to regret" reminds listeners about another favorite female Israeli role model, movie star Gal Gadot.

"Women this year are searching and finding their voices, which is great and very, very, very important. But it's an empowerment song for everybody in general, for everybody who's been struggling being themselves, struggling with their bosses, with the government... Everybody can find something in it, and it's wrapped in a happy, happy vibe," Barzilai said after her win Saturday night over representatives from 42 other countries.

Eleni Foureira of Cyprus came in second for her song, "Fuego," winning 436 points from viewers and judges compared to Barzilai's 529 points. The 63rd Eurovision Song Contest was watched by an estimated 200 million people.

Jubilant fans in Tel Aviv went wild at the Eurovision news-broadcast at 1:30 in the morning local time-gathering at Rabin Square next to City Hall for an impromptu party under the City Hall billboard flashing the word "TOY."

Fans also spilled onto the streets in Jerusalem's Machane Yehuda market, dancing and singing along to celebrate Barzilai's win.

Prime Minister Benjamin Netanyahu phoned Barzilai to congratulate her despite the late hour, deeming her "the best ambassador for Israel."

And President Reuven Rivlin tweeted, "We're proud of you. We are waiting for everyone next year in Jerusalem."

Next year in Jerusalem

Those are not just empty words. Barzilai's win-on the eve of Jerusalem Day, no less-has secured Israel as the location for Eurovision Song Contest 2019 next May, most likely in the capital city.

It may be tricky to pin down a date since the May calendar is full of Israeli holidays including Independence Day. In fact, Israel is the only country ever to have won Eurovision and not participated the following year. That's because the 1980 contest dates conflicted with Israeli Memorial Day (Yom Hazikaron).

When Israel made its debut in the Eurovision Song Contest in 1973, it was the first non-European country granted permission to participate in the event.

Hod Hasharon resident Barzilai, who studied electronic music in Israel's Rimon School of Music and performed with the Israel Navy Band for her military service, was the house singer at Tel Aviv's Bar Giyora nightclub for three years, toured Israel with an improvisation singing group she cofounded, and is a soloist with the touring group Gaberband.

Her experience has given her plenty of poise onstage. She even kept her cool after the Eurovision contest when her trophy broke (it was quickly replaced with a new one by Eurovision Executive Supervisor Jon Ola Sand).

Nevertheless, the victory had her overcome with emotion.

Congratulatory messages and posts are pouring in for Barzilai from across the world today.