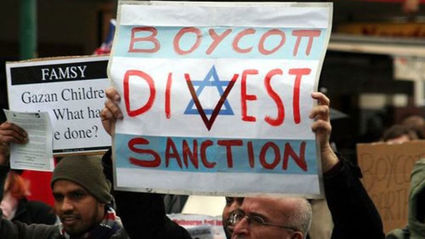 A Boycott, Divestment and Sanctions protest against Israel in Melbourne, Australia, on June 5, 2010.

According to the ministry's data, these groups-part of a network of 300 boycott, divestment and sanctions organizations operating worldwide-have traceable ties to Hamas and the Popular Front for the Liberation of Palestine, and receive their orders directly from the Palestinian Authority.

This network is directed by the BDS National Committee, which is headed by the co-founder of the global BDS movement Omar Barghouti, who holds permanent Israeli residency status and lives in the northern city of Acre.

The Strategic Affairs Ministry, tasked by the Diplomatic-Security Cabinet with heading Israel's efforts to counter the BDS movement and its efforts to delegitimize Israel, has spent the past two years mapping what it calls the "network of hatred."

The ministry's data shows that not only do Hamas and the PLFP support BDS activists in theory, their operatives take an active part in BDS initiatives.

The report names, for example, the Al-Haq human rights organization, Defense for Children International-Palestine, and the Al-Dameer Association for Human Rights as being headed by former PFLP operatives.

Al-Haq is chaired by Shawan Jabarin, of Ramallah, who served 13 years in an Israeli prison for being a member of the PLFP's military wing. Jabarin is a leading figure in the BDS movement's lawfare campaign against Israel, especially its attempts to pursue legal action against Israeli officials in the International Criminal Court in The Hague.

Other examples include groups such as the Palestinian Return Center, which the ministry says promotes Hamas interests in Europe; and members of the U.K.-based Palestine Solidarity Campaign and Friends of Al-Aqsa group, which the ministry says have neem with Hamas leader Ismail Haniyeh, participated in the 2010 Navi Marmara flotilla that sought to breach the maritime blockade on the Gaza Strip, and have recently held a demonstration outside the British Prime Minister's Office in support of Hamas so-called "March of Return" or Gaza border riot campaign.

Speaking at the biennial GC4I conference in Jerusalem Wednesday, attended by the directors of over 150 pro-Israeli groups, as well as Jewish community heads and activists from around the world dedicated to fighting the BDS movement, Strategic Affairs Minister Gilad Erdan said much of the anti-Israel group's momentum is fuel by the Palestinian Authority.

Ramallah is a longtime proponent of anti-Israel boycotts and the National Palestinian Council has officially endorsed the BDS movement during its annual meeting in May.

"We have seen the attempts led by senior Palestinian Authority officials to suspend Israel from FIFA and to promote various 'blacklists' at the U.N. Human Rights Council. These campaigns have all been widely promoted by the network of hatred exposed by the Strategic Affairs Ministry," he said.

Erdan noted that leading world powers such as the United States, Britain, Germany, France, Canada and others, were turning their backs on the BDS movement, adding that in recent years, 25 states in the U.S. have passed laws foiling BDS activities after their anti-Semitic and discriminatory nature was exposed.

Erdan further said that the ministry has identified a new BDS trend-calling for trade embargos against the Jewish state, especially with respect to its military industries, saying that BDS activists were lobbying among parliamentarians worldwide to boycott Israeli defense contractors.

"Terrorist organizations and the BDS movement have never been closer, ideologically and operationally. I will continue to lead a counterattack against the perpetrators of the anti-Semitic hate campaign emanating from Gaza and Ramallah."