In Jerusalem, happy 'horde' indulges in 'meta-reflection' of reality 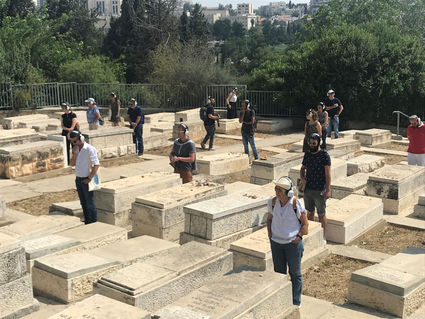 Participants taking part in "Remote X" in a Jerusalem cemetery. Remote X is based on a skeleton of a narrative in which the performers are "remoted" from the normal ways they interact with the city, and instead experience it as a meta-reflection while walking the streets.

(JNS)-As part of the annual Israel Festival in Jerusalem, I boarded the light rail with my fellow performers, each donning a white headset. Our choreographer was a pre-programmed Siri-like female voice named "Rachel" telling us exactly how to perform the show. But I am no actor, and neither were my fellow performers; in fact, we were the ones who needed tickets to the show!

So there we were, in the middle of a performance on the Jerusalem light rail.

"Try to look someone in the eye. Try! They will always look away. That's their software," instructed the synthetic voice in our headsets. "Only children will look you in the eye. They haven't been fully programmed. They don't have a firewall yet."

As the "horde" (the name with which Rachel so affectionately referred to us performers) got off the light rail, we were given frighteningly accurate directions-the voice telling us where to turn, how to interact with others and move our bodies, and even what to think about.

Throughout the 105 minutes of directed navigation, this voice, programmed by the avant-garde theater collective Rimini Protokoll, led 50 of us along the streets of Jerusalem on an audiovisual journey that started in a cemetery and ended atop a Jerusalem rooftop some 2 kilometers (a little more than a mile) away from the starting point.

"Rimini Protokoll has been working as a collective for 18 years, exploring original theatrical means and tools, and expanding them to devise new perspectives on contemporary reality," writes an Israel Festival spokesperson. "Accompanied by cinematic soundtrack, the streets of Jerusalem become a theatre set, and we, the performers in it."

Remote X, the name for the show that has been carried out in many cities all over the world, is based on a skeleton of a narrative in which the performers are "remoted" from the normal ways they interact with the city and instead experience it as a meta-reflection while walking the streets.

Before the performance in a particular city, scouts arrive to perfect the routes and adjust the text and narration.

"The piece is a reflection of the individual and the digital voice, using the city as the scenery and landscape to go through this process," the Israel Festival's artistic director, Itzik Giuli, tells JNS.

"It is interesting to juxtapose deep reflection about city life and the way we perceive ourselves as a group and as individuals, all projected to us from a very interesting angle outside of the theater," he says.

"The performance creates a space to be reflective, asking questions such as, 'What is going on here?' 'Why are people doing that?' 'What is this mechanism?' 'How do I belong in this mechanism?' 'Are we really individuals?' and 'What does it tell us about ourselves?' The performers meet each other and the city, learning about the social and political environment."

"Art," he says, "is a space to reflect about reality, to explore."

"It is a way to take another look at something-separate from the way institutions want us to think about reality-and see something behind the veil," he continued. "Some participants will come out with the realization that they are part of a big machine of biology, urban spaces, belonging to those environments, and will open up and acknowledge that. But everyone will take something different out of it."

The first seven of the performances of Remote Jerusalem were sold out almost immediately. Giuli maintains that the Jerusalem show is particularly compelling due to the city's rich history and religion.

"Each city has different connotations and people are different the way they behave and dress. Jerusalem is unique in its environment," he says.

"I hope it brings Jerusalem to Jerusalem," adds Giuli. "I hope it makes the citizens and visitors to Jerusalem think about their environment and reflect about cities and their lives."