Walter Goldstein lights up lives with a song and a smile 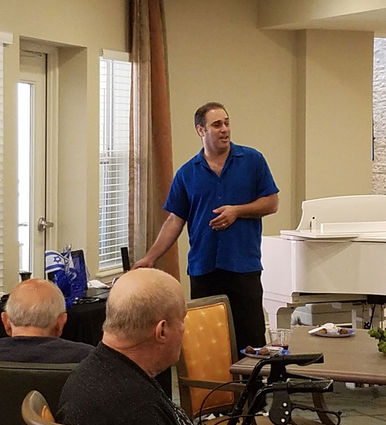 When Walter Goldstein comes to seniors facilities to do programs, the residents know they're in for a treat. Goldstein, a program director for The Jewish Pavilion's south Orlando region, has a warm and welcoming way of connecting with them individually as they settle in for his programs. And he knows his audiences, leading engaging programs that both pull in Jewish culture and tradition and also remain relevant for the many non-Jews who also attend.

And then there's that voice.

Clear, strong, and mellow, with a three-and-a-half-octave range-"four octaves on a good day"-Goldstein's smooth singing voice calls to mind the beloved mid-century recording artists who brought the Great American Songbook and Broadway and popular tunes to radios, stages and movie screens all over the country.

With a karaoke machine and speakers in tow, Goldstein delights residents who attend his programs with his captivating renditions of the songs they know and love. Sometimes they just listen, concert style, and enjoy. Sometimes they sing along. But they are always engaged and entertained.

"I love it when he comes to sing to us! I could just listen to him all day, every day." This reaction from one of the residents of Sonata West pretty much summed up the sentiments of the 15 or so people who had come to a monthly Shabbat program at the new independent and assisted living facility in southwest Orlando one recent Friday.

Goldstein was born and grew up in Lindenhurst, on Long Island, NY, and it was there he launched his singing career at the age of only 4. He performed songs from "Fiddler on the Roof" in a garage for his neighbors at the instigation of his sister, Penny, who also loved to sing and who performed with him that day.

"She wanted to be a star," he said, "and she dragged me along with her with everything she was doing." The pair continued to entertain neighbors and friends as they grew up.

While still young children, the two started going up on the bima on Friday nights to lead their small Conservative congregation in singing "Adon Olam." The Goldstein family was very involved in their synagogue and attended regularly, and gradually the Goldstein siblings led more and more of the prayers. "We pretty much ended up leading the whole Friday service," Goldstein said.

When Walter was 18 he followed his father, a three-time congregation president, on the path of leadership at Lindenhurst Hebrew Congregation, joining the board and later becoming treasurer as well as chairing several committees and ushering on high holidays. He also began working in the family business, providing formal wear for weddings and travel services for honeymoons.

Then he became involved in a community theater company throughout most of his 20s. "I learned to do everything," he said, "so if I wasn't onstage, I was backstage helping. I knew how to run the soundboard and the light boards, and I knew how to build the sets."

One day he got a call from another theater group to fill in as Sky Masterson, a lead character in "Guys and Dolls." It was there he met his future wife, Helene, who was playing Adelaide.

That "Guys and Dolls" production was also where he picked up the nickname "Sky." The play's director ended up taking the production to Off Broadway. Needing a professional stage name, Walter Goldstein became Sky Walters. It's a name he's still known by to this day as he performs around town both as a singer and a karaoke MC.

Goldstein and his wife continued performing in musicals Off Broadway and elsewhere after that production ended. Then, when Goldstein was 30, their son, Brad, was born. At first, the couple tried switching off with productions to accommodate their family lives as well as their love of performing, but eventually they ended up in productions that ran at the same time.

"We sat down and talked," Goldstein said. "And we decided we really wanted him to be in the spotlight. We didn't need it to be on us as much as we wanted it to be on him." After that, they begged off performing in musicals unless it was to fill in at the last minute for a night or two.

Goldstein made a living as a janitor in the New York City school system and also in retail, with a side business as a DJ and karaoke MC. Then his father, living in Delray Beach, started having health problems. Goldstein realized that he needed to move to Florida so that he could reach his father more quickly and easily when needed. That's when the Goldstein family moved from New York to Orlando, where his sister, Penny, now lived.

He continued in retail and reestablished himself in the DJ and karaoke business. Then he met a Sammy Davis Jr. impersonator and the two began performing together in Orlando-area senior living facilities, with Goldstein maintaining his usual performing style as Sky Walters.

When Helene began undergoing treatment for breast cancer, Goldstein needed to focus on his family, and the performing duo split up. Helene has been in full remission for 10 years. When Goldstein returned to performing, he became a solo act.

Then his sister once again pulled him into something. Now known as Penny Goldstein D'Agostino, Goldstein's sister has been The Jewish Pavilion's CFO for several years, and she is also well known as an entertainer at local seniors facilities. She needed help in the Pavilion's offices and recruited Goldstein, who began working there part time to do what was needed.

When one of the Pavilion's four program directors decided to retire about two years ago, Goldstein, who already had so much experience engaging with seniors in local facilities and had formed relationships with so many of them, was a natural fit for the role.

He continues to perform on the side as Sky Walters, even in some of the same facilities where he comes in to do Jewish Pavilion programs. This might seem as it if could be confusing, but the seniors who enjoy his programs so much don't seem to mind. Joked Goldstein, "I go at, let's say, one o'clock to two o'clock as Walter, and then at two-thirty to three-thirty as Sky!"

Singing is a natural fit for the Jewish programming he does, and he is always finding connections to Jewish themes in the popular music he sings. He is also mindful of his audiences, taking into account the needs of the non-Jewish residents who attend his programs and sometimes, he said, "outnumber the Jewish residents ten to one." He helps those non-Jewish guests to understand a little bit more about Jewish holidays and culture and how they fit into the larger culture.

Goldstein's other role at The Jewish Pavilion is as intergenerational programming coordinator. He works with directors of synagogue and other Jewish youth programs around town to arrange for the teens to visit nearby seniors facilities.

Sometimes the teens come in and play games with the residents or do other light socializing. Other programs provide more of a learning experience for both the teens and the seniors, Goldstein said. For example, he said, "they sit and discuss current events and how they connect with the past."

One such recent conversation connected the liberation of Jewish slaves in Egypt with freeing the American slaves, the women's liberation movement, and the recent student-led protests following the mass shooting at Marjory Stoneman Douglas High School. "Different sides are seen and different sides are heard, and it's all done with respect," Goldstein said.

Goldstein also arranges matches between b'nei-mitzvah-aged teens and seniors for one-on-one visits in which the teen spends 30 to 40 hours over several months getting to know their new friend and learning about what life was like when the senior was a teenager himself or herself.

Like his roles as a musical theater performer, karaoke host and professional singer, Goldstein finds his roles at The Jewish Pavilion to be very fulfilling.

"It's not the accolades," he said, adding that being complimented on his singing tends to make him feel a bit uneasy. "But I love looking out as people are listening and seeing smiles."

He finds it even more rewarding than his years of performing on stage, sometimes for crowds of thousands. "Now I'm only in front of ten, twenty, thirty people at a time. I can sit and talk with them. I can see the smiles. I can see what makes them happy," he said. "I enjoy that."