Both 'sides' benefit in the Inter-generational Program 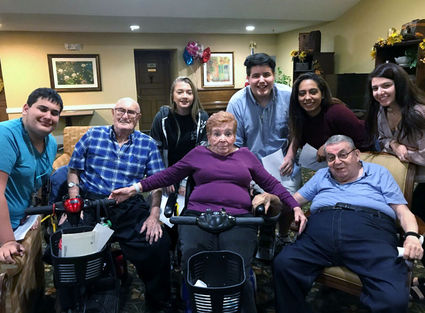 Students and senior citizens learn from each other in the Jewish Pavilion Inter-generational Program.

What a spectacular year of learning! The Jewish Pavilion's Inter-generational Program had a fantastic year with more to come. This program was made possible in part due to grants from The Moskowitz Foundation, the Jewish Federation and the Staples Foundation. Teens and seniors were welcomed into each other's minds and worlds. Experience's varied from group meetings, discussions and playtime to one-on-one visitations. Programs enabled teens the opportunity to break out of their shells and engage in dialogue with their elders. Laughter was shared. Music was enjoyed. Lessons were learned and ideas were exchanged. Similarities were learned while coincidences were discovered. In some cases it was a who's who in a family tree that knows someone in another's family, while in other cases, total strangers now departed with hugs after a respectful exchange of ideas.

In the beginning, it was two separate groups. The conclusion was one group that ended with friends, smiles, hugs, respect, patience, understanding, admiration, trust, insight and caring. Who can say which group gained more?

Both side had benefits. The teens received the wisdom of their elders, firsthand accounts of their heritage and history that could not be taught in books. The seniors were able to absorb some of the infectious enthusiasm of the teens and the wide-eyed excitement of a world yet to come. Together, there was an exploration of thought processes that will only lead to a better tomorrow for all.