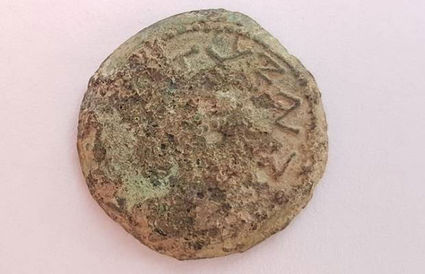 A coin discovered in Jerusalem reads "Redemption of Zion."

A rare bronze coin dating to the first century and minted during the fourth year of the Great Jewish Revolt against the Romans was recently discovered at the archaeological sifting project at Emek Zurim National Park in Jerusalem.

The source of the soil from which the coin was extracted is the City of David National Park in the heart of the Old City.

The coin, minted by Jews in the year 69 CE, right before the destruction of the Second Temple a year later, features the words "For the Redemption of Zion" in ancient Hebrew script, with an image of a goblet under the inscription.

On the other side of the coin is an image of the Four Species and the words "Year Four"-representing the fourth year of the Jewish rebellion against the Romans. Just a short time afterward, in the year 70 CE, the revolt was subdued by the 10th Legion and the Second Temple was destroyed.

From 'Freedom' to 'Redemption'

"The Jews minted coins throughout the entire period of the revolt, but in the fourth year of the five-year rebellion, we see that instead of the words 'Freedom for Zion,' the coins were minted with the words 'For the Redemption of Zion," Israel Antiquities Authority (IAA) archaeologist Eli Shukrun noted.

He explained that the difference between "freedom" and "redemption" expresses the change that took place "both in their mindset and in reality, at that time."

"Coins that were minted in the second and third years of the revolt are plentiful and easier to find, but coins from the fourth year are much rarer," he added.

The coin was found in soil extracted from an underground drainage canal at the City of David, which passed underneath Jerusalem's main street at the end of the Second Temple period. According to the writings of Josephus Flavius and based on archaeological evidence, the last remaining Jewish rebels hid from the Romans in this canal.

Dropped from someone's hand 2,000 years ago

"It is possible that this coin was in the pocket of one of the residents of Jerusalem who hid from the Romans in the tunnels underneath the city streets," Shukrun said, "or perhaps it rolled into the drainage canal, dropped from the hand of someone walking down the streets of Jerusalem over 2,000 years ago.

The timing of the rare finding on Sunday was perfect. It occurred just as the Jewish nation began to commemorate the Three Weeks of Mourning on the fast of the 17th day of Tammuz on the Hebrew calendar, which corresponded with this past Sunday and is the date when Jerusalem's walls were breached. The mourning period continues until the fast of the 9th of Av, the date that the First and Second Temples were destroyed.

The coins were discovered as part of the "Archaeological Experience" activity offered to the general public at the sifting project at Emek Zurim National Park. The activity invites participants of all ages to come and serve as archaeologists for the day. They sift through the artifact-rich soil from excavations held by the IAA at the City of David and throughout ancient Jerusalem and reveal Israel's multi-faceted ties to the city.

Incidentally, despite vigorous attempts by historians, there has yet to be uncovered any evidence of any "Palestinian era" in the city.