As Hamas ups the ante in Gaza, Israel loses patience, hitting back 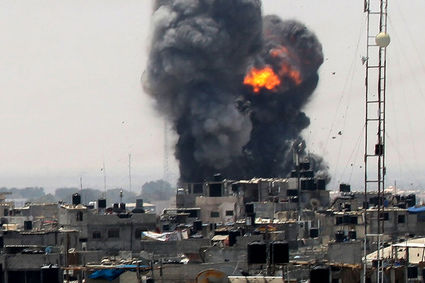 Smoke and fire rises from a location, reported to belong to Hamas following an Israeli air strike in the southern Gaza Strip town of Rafah on July 14, 2018.

(JNS)-In its desperate effort to break out of isolation and prevent the Gazan economy from collapsing, Hamas is marching Gaza to the very brink of war with Israel.

All of Hamas's recent actions are designed to use blackmail, terrorism and the threat of war to force a change, as well as get major funds flowing into the Gaza Strip.

These efforts began several months ago with mass marches on Fridays and border-infiltration attempts. That ended with a high number of casualties on May 14, but failed to create substantial change, and Hamas's strategic distress continued. It then turned to mass arson attacks on Israel's agricultural southern regions instead. Farms and fields near the border with Gaza have experienced dozens of blazes per day, costing tens of millions of dollars in damage, and burning swaths of land.

In the past few days, Hamas began ramping up the pressure further, escalating clashes along the border. On Friday, Hamas dispatched thousands of Palestinians to the border, where rioters hurled grenades, firebombs and rocks at Israel Defense Forces' soldiers.

One grenade blast injured an IDF officer; those behind the attack were hit by IDF fire. The Israeli officer's condition is stable, but the incident marks a new level of violence.

Israel has been watching this escalation for some time and was not terribly surprised by it.

An internal debate has been taking place over the extent of measures that Jerusalem can take to ease restrictions on Gaza, yet doing so without providing material or propaganda gifts to Hamas.

As this debate occurs, Hamas, under pressure, keeps upping the stakes.

In response, the IDF launched three waves of airstrikes on Hamas targets on Friday and Saturday. These airstrikes could be one of the final warnings that Hamas receives from Israel, calling on it to de-escalate.

The situation has been made more explosive due to a new insistence by Hamas and Palestinian Islamic Jihad to respond to all Israeli strikes with projectile attacks on Israeli communities.

As a result, southern Israeli communities-already dealing with weeks of arson-have now again been showered with mortars and rockets, with more than 100 being launched on southern Israel on Saturday.

Yet both sides have stopped short of going to war. Hamas is sticking to short-range fire, and Israel's airstrikes have destroyed tunnels, command posts and other military targets, but did not target senior Hamas members.

The situation cannot last much longer this way. Hamas is employing a highly dangerous yet calculated strategy of brinkmanship, aimed at getting the main actors of the region-Israel, Egypt and the Palestinian Authority, as well as the international community-to recognize its rule over Gaza, end Hamas's isolation and inject major investment into the territory.

Yet Hamas has been unwilling to do anything to end Gaza's isolation. It refuses to slow down its weapons-production programs. It continues to stick to a radical Islamist ideology and remains committed to the destruction of Israel, as well as the toppling of the Palestinian Authority in the West Bank.

It plans to keep Gaza armed to the teeth, to take over the West Bank and to keep the flames of conflict alive.

Trapped in its own paradox

At the same time, Hamas wants to rule over a Gaza that has its own sea port, that has economic relations with its neighbors, and territory in which the international community invests large amounts of money in infrastructure and the economy.

As a result, Hamas continues to be trapped in its own paradox, and cannot decide if it is a terror entity or a state. It's trying to dance at two weddings, and it is playing with fire.

If Hamas has concluded that it can wage endless attrition against Israel's south, it will likely soon discover that it has miscalculated. Although Israel has little desire to get bogged down in Gaza's urban warfare jungle, it would do so if Hamas leaves it no choice.

The head of Hamas in Gaza, Yahya Sinwar, is likely aware that a war now with Israel has nothing good to offer him. He has tried and failed to launch a reconciliation effort with his rivals in the West Bank: the Palestinian Authority. That effort was aimed at relaxing the chokehold that P.A. leader Mahmoud Abbas has placed around Gaza.

In the past months, the P.A. has reduced payments for electricity to Gaza, lowered salaries for its employees in Gaza and in general treats Gaza as a break-away rebel province that deserves to be punished and isolated, and cut off from funding.

Iran has been able to take some advantage of this vacuum, inserting cash assistance to the armed wing of Hamas, in addition to its support of Palestinian Islamic Jihad.

But that isn't enough to solve the festering crisis facing Gaza's civilian economy. If that ends up collapsing, Hamas's regime will be in jeopardy due to resulting anarchy. Hamas would go to war with Israel before allowing that to happen.

That, in effect, is what Hamas is threatening to do if no solution is found for Gaza's economy.

The latest escalation between Israel and Hamas is, in essence, an explosive attempt to conduct negotiations, using bombs as message delivery systems. Hamas is signaling its desire to open Gaza to the world, end its isolation, and gain legitimacy; Israel is signaling that its patience is about to run out.

There is no way of knowing whether Hamas will back down or head over the abyss.