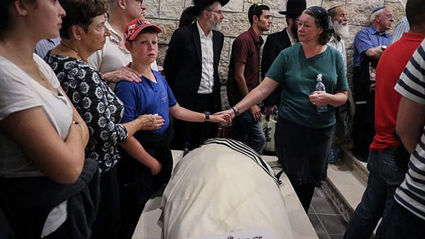 Ari Fuld's son and wife hold hands over his enshrouded body, wrapped in a tallit and awaiting burial at the Kfar Etzion cemetery in Judea.

(JNS)-Thousands of people gathered at the Kfar Etzion cemetery just before midnight on Sunday to eulogize and lay to rest Ari Fuld, a 45-year-old father of four living in Judea whose fight against the terrorist who stabbed him earlier in the day earned him acclaim throughout the country as a hero.

"You were a good man. I'm not sure how to go on without you," Fuld's wife, Miriam, said at the funeral. "You were always running towards danger instead of away from it, and you never backed down from a fight because you knew you were in the right.

"You fought for what you believed in," she added. "You've left behind a legacy for the entire world to savor-videos and stories that we will be telling for many years to come."

Fuld, a well-known Israel advocate who promoted Jewish life in all of Israel via social and traditional media, was waiting for an order of falafel to be ready at the Gush Etzion shopping center in northern Judea when he was approached by 17-year-old Khalil Yousef Ali Jabarin. The two engaged in a brief interchange, after which Fuld turned around and was then stabbed violently by Jabarin.

Though Fuld was felled by the blow, he engaged his training as an IDF paratrooper and as a member of the local security team for his hometown of Efrat, and jumped up, ran after the fleeing terrorist, leapt over a low cement wall and fired his personal firearm at Jabarin. A security guard and an armed Israeli shopper also fired at the killer. Fuld collapsed and was taken to Jerusalem's Shaarei Zedek Medical Center, where he passed away soon afterwards.

The funeral, which was attended by several dignitaries, including U.S. Ambassador to Israel David Friedman, was delayed a few hours after the killing so that one of Fuld's children, who was in the United States, could arrive.

Fuld held duel U.S. and Israeli citizenship, and was a 1991 graduate of Yeshiva University in New York.

"He was a true hero. Not only in his death, but all of his life," eulogized Fuld's father, Rabbi Yonah Fuld. "He was a giant of strength, of passion, of love for his family. He was a hero to all." Fuld's father noted that the family had received tens of thousands of messages of support from people all over the world, including from staunchly Muslim countries.

"He gave his life to sanctify God, to sanctify the land," said the rabbi. "If you would have asked him, that's way he would have said he wanted to go."

Prior to the funeral, the parents and brothers of Fuld received a visit from Israeli Prime Minister Benjamin Netanyahu. "I embraced them in the name of the entire nation in this time of terrible grief," Netanyahu said on Twitter. "We are alive thanks to heroes like Ari. We will remember him forever."