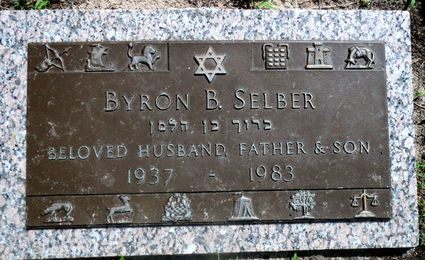 Byron played an important role in recruiting me to come to Orlando to head the JCC and Federation. We became best of friends and worked together on many communal efforts including starting the Hebrew Day School (along with the Zissmans, Biermans and a few other families).

Even though we did not know how serious it was at first, Byron's illness shocked all of us. It was during Kol Nidre services (Sept. 16, 1983) at Congregation of Liberal Judaism, that Arnold Bierman told me how serious Byron's fast moving cancer was. From that day on, until he passed away on Oct. 6th, I sat with him every evening, giving Gerry some much needed time with her family. I was with Byron and Gerry when she said her final words to him and he left us.

I was honored to give a eulogy at his funeral. Here is what I shared with shocked, heartbroken and grief stricken family and community...

"Byron's life, although short, was like many of the short books that we have read-few in pages, but full of teachings for all of us.

A book full of life.

Chapter 1. Byron always believed that the slogan "We Are One" was much more than just rhetoric. He wanted our community to develop a strong unity-to build as one-to achieve as one.

Chapter 2. Byron led two lives. He always was one of the hardest working, most sensitive, most sincere, most effective leaders our community could ever hope to have, and he and Gerry also fulfilled the biblical commandment "Be fruitful and multiply." He was a man extremely devoted to his entire family.

Chapter 3.Three times in our Jewish community's history Byron took on major community leadership roles-three times more than most of us, and a role for us to consider. Years ago, at a young age, he chaired our community's Combined Jewish Appeal Campaign. More recently, he was one of the founders of our community's Hebrew Day School. And just recently, he accepted the position of President of Temple Israel.

Chapter 4. The four M's-Michelle, Mindy, Marni and Miriam-Byron and Gerry's legacy to the future strength of our Jewish Community.

Chapter 6. The six basic phrases of the kaddish. Byron always stood to say this prayer in memory of the millions of Jews who lost their lives just because they were Jews. All of us will be saying this kaddish, now, for Byron.

Chapter 7. Seven days a week, 52 weeks a year-Every day committed to the true concept of Tzedakah. Byron was not just charitable, he was a righteous Jew-full of justice and compassion for every human being.

Chapter 8. As we perform the Brit Milah on the 8th day of life to commemorate G-d's covenant with Abraham, Byron taught us that our covenant with G-d was to commit every ounce of strength we have to work for the survival of all Jewish people.

Chapter 9. During the nine months of pregnancy one plans for the future of one's new child. Byron helped to conceive and give birth to Jewish life in our community.

Chapter 10. The basic tenets of our Jewish heritage are derived from our 10 commandments. Byron took these ancient precepts and made them alive for each one of us.

Chapter 11. The eleven stars of Joseph. We pray that their light and warmth will brighten Gerry and her family's life from now on.

Chapter 12. The 12 tribes of Israel. We pray that their combined strength will protect Gerry and her family from now on.

Chapter 13. The 13 attributes of G-d. We pray that they give guidance to Gerry and her family from now on.

Chapter 14. In Hebrew, 14 is written as Yud Dalid, which can be translated as Yad-or memorial-as in Yad Vashem. Our community should dedicate itself to being a Yad Byron.

Chapter 15. The 15,000 Jews of our community who have benefited, are benefitting, and will continue to benefit from Byron's life here on earth.

Chapter 17. The 17 beautiful and fruitful years that Gerry and Byron spent together.

And finally, Chapter 18. The Chapter of Life, the long life that Byron greatly deserved but was not given. As short as this book and Byron's life were, he has left an unmeasurable and unerasable mark on all of our lives.

We loved Byron, we love him now, and we will forever love and miss him."

May Byron's life continue to be a blessing to his family, to his community, and to the Jewish People