Could Chinese involvement in Israeli ports pose a security risk? 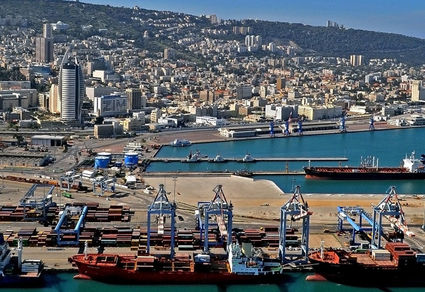 (JNS)-A decision by the Israeli government to award Chinese companies contracts to manage and build key Israeli ports is drawing controversy in Israel.

Haifa's growing port, located close to a naval base, will be managed by one Chinese company, while a second port in Ashdod, also near a naval base, is being constructed by a second Chinese firm.

The topic made headlines in recent weeks following a University of Haifa conference on Maritime Security in the Eastern Mediterranean.

During the conference, Brig.-Gen. (res.) Shaul Chorev, a former Deputy Commander of the Israeli Navy, told the Israel National News website that "when China operates a port, it also controls communications means. This is contrary to the interests of other states, and there is no mechanism [in Israel] that considers this."

Chorev reportedly added that this would undermine the chances of the United States viewing Haifa Port as a home base that it could invest in-just when Israel should be seeking to strengthen its position as a strategic regional base for the U.S. Navy.

Chorev added that when it comes to international affairs, "China is not on our side," saying it supports Pakistan and purchases oil from Iran.

Rear Adm. Oded Gour-Lavie (Res.), a former head of the Israeli Navy's Strategic Task Force, and a Research Fellow at the Haifa Center for Maritime Policy and Strategy, addressed the Chinese involvement in Haifa Port, telling JNS that Israel was facing competing economic and security considerations.

"There are basically two distinct issues we need to look at," he explained. "One is the way decisions are made when economic issues and security issues can be in opposition, and even though both are part of the overall national security realm, they should be brought to attention-with all the information and strategic analysis-so we don't 'shoot ourselves in the foot.' "

As the world's second-largest economy, China has been quickly expanding its role abroad. Under President Xi Jinping, the country has embarked on the ambitious Belt and Road Initiative, a modern-day adaption of the ancient Silk Road, which seeks to revive and extend networks of land and sea trade across Eurasia connected to China. While the focus for China is on economic development across the continent-investing trillions in new roads, power plants, ports, airports and telecommunication links-others see it as a push for Chinese dominance in global affairs and a push for Chinese-centric trade routes.

Given its location in the eastern Mediterranean, as well as being connected to the Red Sea and points east through its southern city of Eilat, Israel sits in a geostrategic location for this initiative and can benefit from big infrastructure projects financed by China.

Gour-Lavie, who once headed the Naval Operations and Doctrines Division and served as the former Commander of the Israeli Submarine Flotilla, added, "Obviously, we see that in this case, the process was not done in a professional way. The government process has to be improved, and the National Security Council [NSC, a central body operating under the Prime Minister's Office to coordinate security policy] has to be stronger in these processes."

Israel, he argued, had to take great care not to jeopardize relations with its biggest and most important ally, the United States, "even when the economic logic" in awarding contracts to Chinese companies "is strong."

While mutual interests can last in the short term, their long-term future is uncertain in light of factors such as China's way of governance and political logic, he added.

Regarding what he described as "the specific threat assessment from having a Chinese company build and run the Haifa base, Gour-Lavie stated that "there can also be ways to reduce and mitigate those possible threats or worries."

Ultimately, he added, Israel "should have very good relations with China."

China's market size, financial reserves, funding capabilities and political connections, he affirmed, can all reduce any threat to Israel "by having China better understand Israeli needs and perspective on major issues."