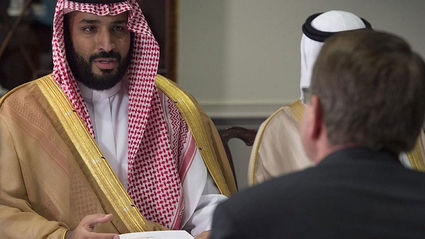 (JNS) Saudi Arabia's King Salman and his powerful son Crown Prince Mohammad bin Salman (known for short as "MBS") continue to project stability despite the jitters that the murder of journalist Jamal Khashoggi sent through the American and European capitals.

MBS appears confident, no matter the widely reported claims that he was responsible for Khashoggi's killing. On Monday, the prince launched the building of the country's first nuclear reactor. Meanwhile, the king started a weeklong domestic tour on Tuesday.

That tour is meant to shore up domestic support after the turmoil the international affair has caused, yet the only threat to stability at the moment remains from outside actors-particularly, arch-rival Iran, and from some Western governments and businesses that have cooled on the kingdom of late. But this will surely blow over because of the Saudis' vast economic clout.

As far as domestic fallout, business will likely continue as usual.

"This is no different from the hundreds of assassinations and political murders committed within the Arab-Islamic world," Norvell DeAtkine, a retired U.S. Army colonel with nine years' residence in the Arab world told JNS. He has also dealt with various other militaries, including those of Lebanon, Jordan and Egypt.

"The skins of the despots in the Arab world tend to be very thin," added DeAtkine, who has spent more than 40 years studying the region and still instructs army personnel assigned to the Middle East. "Given the importance of words and the concept of honor, Khashoggi's murder was not particularly dramatic. Only Western media made it so," he said, making the point that in the Arab world, these kinds of things are par for the course.

DeAtkine wrote in a blog post that was reprinted at JNS that Khashoggi came from a wealthy family of arms-dealers and had graduated from Indiana State University. He was also part of the elite in Washington, D.C. "Urbane and well-spoken, he could put together Muslim Brotherhood, Sharia and democracy in one well-turned sentence, endearing him to the chattering class," he stated.

Harold Rhode, a former adviser on Islamic affairs in the Office of the U.S. Secretary of Defense and now a distinguished senior fellow at the Gatestone Institute think tank, told JNS that the battle has grown within the Sunni world for leadership between Turkish President Recep Tayyip Erdogan and Saudi Arabia.

"Saudi Arabia controls Mecca and Medina, the two most important Islamic holy sites, which gives the Saudis special status in the Muslim world," he said.

As Rhode also noted, "in the past, the Saudis preferred to work quietly and solve their internal disputes behind closed doors."

MBS has arrested critics and the wealthy alike on charges of corruption. But Saudi Arabia is a family fiefdom where the almost 30,000 royal family members divvy up the state revenues among themselves.

"By that definition, the entire royal family, including MBS, is corrupt," according to Rhode.

Earlier this year, the Saudi government under MBS's leadership locked up hundreds of wealthy businessmen, many of whom are royal family members, as part of a massive crackdown that saw billions of dollars of assets seized and put under MBS's control.

Meanwhile, the crown prince is trying to use the country's sovereign wealth fund-or the Public Investment Fund-to stave off economic collapse by reducing the country's dependence on oil. However, with current low oil prices, continuing corruption, high spending (including a planned $500 billion robot city) and generous economic benefits, the government is in a pinch. In April, the Saudi government said it is seeking to raise $9 to 11 billion dollars in non-oil revenue by privatizing companies by 2020.

"The arrests and dismissals of other royal family members have created blood feuds within the family. Those shamed by MBS have brooded in silence, waiting until they would be able to avenge their honor, and do to MBS what he did to them," said Rhode.

"MBS is only 33 years old and unexperienced," noted Rhode, who added that the older leadership knows how to play the game in a more sophisticated and intelligent manner without creating a Khashoggi-like crisis.

"Khashoggi was no angel," said Rhode, adding that he was a dangerous Muslim Brotherhood supporter pushing his agenda from his perch in Washington, but for "many Americans, Khashoggi had gained 'sacred' status as a journalist in Washington."

Is Saudi rule at risk?

Asked if the Arab culture of honor and revenge could lead to royal family rivals attempting to topple MBS, Rhode responded: "Yes, there is a risk of assassination."

"Look at how the Saudis reportedly tortured and killed Khashoggi," continued Rhode, saying that this is the way things go down in the Middle East.

"Arab culture is unlike Western culture, which values asking for forgiveness from others that you have harmed. In Arab culture, he who asks for forgiveness is showing weakness," he said. "Unfortunately, life in the Arab world is a constant struggle for power, and sadly, the crueler you are, the stronger you appear."