By Jackson Richman and Alex Traiman 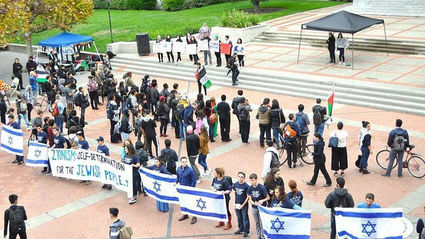 Students with UC Berkeley's Bears for Israel hold a counter-demonstration at a Students for Justice in Palestine rally.

(JNS)-The controversial Canary Mission-an anonymous campus watchdog group that exposes organizations, academics and activists that demonize Israel on college campuses-recently came under fire when the San Francisco Jewish Federation indicated that it would no longer facilitate private-donor funding of the group.

Articles in The Forward blasted the organization as "shadowy" for refusing to identify its leadership and sources of funding.

Yet for pro-Israel student activists who are actively fighting against intensifying bigotry and intimidation on universities throughout North America, the work of Canary Mission provides useful tools in the war against campus anti-Semitism.

"I'm a fan of good reporting, and Canary Mission does just that," he says. "The number of anti-Semites on campus is rather alarming, and their actions even more so. Exposing institutionalized and tolerated anti-Semitism isn't done often enough, and as someone who has seen such rampant anti-Semitism on campus, I think it's more than appropriate to have a supporting site."

People need "to take a step back and look at what they're angry at," adds Katz. "Why are they mad at a site for exposing anti-Semitism, and ignoring the students and faculty who call Zionists 'pigs and dirty colonists?' Why are we neglecting, and passively tolerating, such hatred?"

"I support Canary's Mission because there is a need to call out folks who claim to stand for 'justice for all... except Zionists and those who support them,'" he says. "That sort of double-standard is rarely accepted in any scenario, yet seems to be tolerated when it comes to Israel because Palestinian rights and narratives are higher up on the echelon of the 'suffering olympics.' "

"A blacklist like Canary Mission does not give a bad impression of the pro-Israel community because the people on there are there for a reason, and that is because they are adamant and unashamed of their hate," explains Grunberg. "If supporters of Israel simply sat back and did nothing while people with power and influence vilify Israel on a daily basis, how would people know the truth about what's really happening on the ground? Why should we simply sit back and allow the hate to fester, when no other country in the world deals with such a level of double-standards and revisionist history?"

At the same time, he continues, "I strongly encourage anyone who visits Canary Mission to double- and triple-check that everything on there about the person they are searching is accurate."

Phillip Yurchenko, a junior at Wake Forest University in Winston-Salem, N.C., says "I think that the Canary Mission is constructive and super helpful, especially for college students. I am a strong supporter of free speech, but that's not mutually exclusive with accountability."

Canary Mission claims to be an apolitical organization that aggregates information from publicly available sources, exposing groups and people that participate in "anti-Semitism, racism and bigotry on the far-right, far-left and among the array of organizations which constitute the BDS movement."

According to its website, "If you're racist, the world should know."

In D.C., George Washington University's Shep Gerszberg notes that while Canary Mission's research on professors is almost always beneficial, profiling pro-BDS students can have unintended consequences in the growing trend of claiming victimhood.

"Organizations like Canary Mission can help Jewish students know which professors to avoid for their bias," he says. "But when they go after students that are anti-Israel/pro-Palestine, it just contributes to their ability to portray themselves as victims."

Katherine Dolgenos, a former president of the Israel Alliance at Pomona College in Claremont, Calif., says "the default viewpoint on many campuses, especially liberal-arts schools, is that Israel is an illegitimate apartheid state. Many students attend what they understand to be pro-Palestinian solidarity events without fully understanding the conflict."

Dolgenos warns, however, that some students arrive at Students for Justice in Palestine meetings without necessarily understanding what the organization actually stands for and may become bystanders who then find themselves targeted by Canary Mission as anti-Israel activists.

"Anti-Zionism on campus is an intractable problem, and pro-Israel students are fighting a difficult battle," she says, noting that sometimes Canary Mission "finds and publishes personal information about students with dubious anti-Zionist connections; for example, some students on the website have merely attended Students for Justice in Palestine meetings and are not necessarily members of the club."

Dolgenos suggests that such targeting can be "counterproductive."

She thinks that "pro-Israel students should try to convince anti-Zionists that engaging in dialogue and exercising their right to free speech" is a more altruistic and effective methodology for combating intimidation than "publishing their opponents' personal information and exposing them to threats."

Brooke Goldstein, executive director of the Lawfare Project, says the targeting of students and campus professionals alike is fair game in the fight against anti-Semitism. "Why do we have to be afraid to publicly expose those who are rabidly anti-Semitic? Have we learned nothing from our tragic past? When we remain silent, we are trampled on."

Goldstein, whose organization runs the Campus Civil Rights Project, which according to the Lawfare Project's website was created "to preserve and defend the civil rights of Jewish and pro-Israel students and faculty members at America's colleges and universities," adds that "if you want the world to respect your basic civil rights to equal protection under the law and to a campus environment free of hostility and unlawful discrimination that targets Jewish students, then you have to be willing to stand up publicly and proudly against those who target Jews."

"Insinuating that we should somehow be embarrassed of a website that merely states the facts is ludicrous. The only people who should be embarrassed are those featured on the website for their racism," says Goldstein.

According to Noah Pollak, a prominent writer who serves as executive director of the Emergency Committee for Israel, "Canary Mission is a standing reminder that the BDS movement really is that bad-that it is comprised of anti-Semites, Hamas supporters, and advocates of violence and war."

He says "Canary Mission is highly effective against the BDS movement, and it is also hated by some Jewish progressives. I believe these two facts are not unrelated. There is a minority of Jewish progressives who wish to believe that BDS, which often employs social-justice rhetoric, isn't that bad."

Canary Mission continues to keep its sources of funding anonymous.

According to media reports, the Los Angeles Federation previously transacted $250,000 by an anonymous donor to Megamot Shalom, which allegedly operates Canary Mission. In 2016, San Francisco Federation transacted a $100,000 grant by Helen Diller Family Foundation, a major philanthropic group in the Bay Area, through the Central Fund of Israel, earmarked to support Canary Mission. Both have indicated that they will not continue funding Canary Mission.

Kerry Philp, San Francisco Federation's senior director for strategic marketing and communications, tells JNS that "Federation seeks to support the philanthropic needs of our donors and the broad range of views that they represent. To ensure that all grants are consistent with our mission to be a force for good in the world, we implemented guidelines in 2010.

"A one-time grant was made in 2016 by the Helen Diller Family Foundation, a supporting foundation of the Federation, to the Central Fund of Israel and earmarked to support the work of the Canary Mission," explains Philp. "In 2017, we strengthened the implementation of our review process and determined that the Central Fund of Israel is not in compliance with our guidelines, which apply to donor-advised funds and supporting foundations. Both the Helen Diller Family Foundation and the Federation will not support the Canary Mission in the future."

Apparently, gifts like those made to Canary Mission are left to each local chapter. Jewish United Fund/Jewish Federation of Metropolitan Chicago spokesperson Joel Schatz explains that such grants are strictly reviewed "on a case-by-case basis, and the decision is made by the volunteer committee."

The national umbrella organization Jewish Federations of North America (JFNA) said that the decisions to suspend funding were made at the local level and were not part of a national directive.

"We very much support the right of our Federations to make grant decisions. Each Federation is independent and diverse," says JFNA spokesperson.

Furthermore, JFNA notes that the funds were not initially given directly from Federation budgets, but rather from external philanthropists that rely on Federation recommendations. "It is important to note that both instances were not reflections of Federation allocations, but grants from Foundation or donor-advised funds," states the spokesperson.

Both The Forward and Haaretz used the local chapters' decisions to make the grants one-time only events into major news articles without analyzing the impact that Canary Mission has for Jewish students who are exposed to anti-Israel sentiment and intimidation.

Commenting on the articles published by The Forward and Haaretz, Pollak notes that "these critics have never been able to show that Canary's profiles are inaccurate, so instead they pound the table and use words like 'blacklist' to delegitimize a watchdog that compiles examples of BDS activists celebrating Hitler and Hamas on social media."

"Canary Mission is a standing reminder that the BDS movement really is that bad-that it is comprised of anti-Semites, Hamas supporters, and advocates of violence and war."

Noah Pollak, a prominent writer who serves as executive director of the Emergency Committee for Israel

"Many students attend what they understand to be pro-Palestinian solidarity events without fully understanding the conflict."

Katherine Dolgenos, a former president of the Israel Alliance at Pomona College in Claremont, Calif.