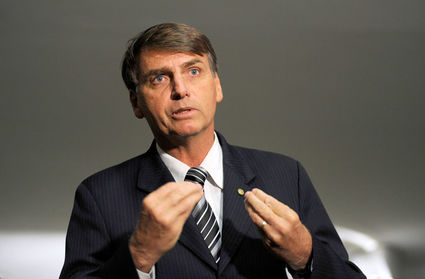 Brazil's President-elect Jair Bolsonaro, a right-wing anti-establishment figure who has promised to upend the status quo in the country, including improving ties with Israel.

(JNS)-Dubbed the "tropical Trump," Jair Bolsonaro's victory on Sunday appears to have imbued much of Brazil's population with renewed hope for a better economy and less corruption. The win by the right-wing, anti-establishment figure may also upend the country's foreign policy, which has brought renewed hope for better relations between the Latin American country and Israel. Indeed, during his campaign, Bolsonaro said he would make Israel the first country he visits as president and would move Brazil's embassy to Jerusalem. He also promised to close the Palestinian embassy in Brazil because "Palestine is not a country."

Israeli Prime Minister Benjamin Netanyahu congratulated Bolsonaro in a phone call, saying, "I am certain that your election will lead to a great friendship between our nations and to a strengthening of Israel-Brazil ties. I'm looking forward to your visit to Israel."

An Israeli official also said that it is "highly probable" that Netanyahu will attend Bolsonaro's inauguration on Jan. 1, in what would be the first time a sitting Israeli prime minister would visit Brazil.

Netanyahu also tweeted his congratulations. "I spoke this evening with the president-elect of Brazil, @jairbolsonaro. I congratulated him on his victory. I told him I'm certain his election will lead to a great friendship between our peoples and a strengthening of Brazil-Israel ties. We are waiting for his visit to Israel!"

'Evangelism there is growing'

Speaking with JNS before the elections, Dina Siegel Vann, director of the American Jewish Committee's Arthur and Rochelle Belfer Institute for Latino and Latin American Affairs (BILLA) in Washington, D.C., said, "We can only base ourselves on his public statements, his campaign promises. He's been very clear. He wants to take the relationship with Israel to new levels. He is saying he wants to move the embassy to Jerusalem, and he said his first trip abroad would be to Israel. Given his background, chances are that he will fulfill these promises."

Siegel Vann pointed out that Bolsonaro's strong religious affiliation with evangelical Christianity means that there is also a religious motivation involved. "Brazil has the largest Catholic population in the world, and evangelism there is growing," she said.

Although there have been a few hiccups along the way, such as when Brazil recalled its ambassador to Israel during the 2014 war in Gaza, the two nations have excellent bilateral ties from decades beforehand. Brazil's domestic needs have sometimes forced it to look beyond Middle East politics.

"Israel has a lot to offer many large countries," said Siegel Vann. "And many other larger countries that have made offers to Latin American countries never came through. Israel is perceived more and more in Latin America as a country that can provide cyber security, water management and more. These are things Latin Americans need, and that's why many of these [Latin American] countries grew their bilateral ties with Israel in past years."

Arie Kacowicz, from the department of international relations at Hebrew University, told JNS "in terms of the tone of relations, it is clear that we will probably see a significant improvement. In terms of substance, we will see."

Kacowicz said that "if you look at the larger context, Brazil is a country that has very strong diplomatic relations with Iran. Its foreign-policy approach has always been multilateral. Brazil has to keep good relations with the other side."

For this reason, Kacowicz is skeptical that Bolsonaro will be able to fulfill all of his campaign promises. "I don't see Bolsonaro moving the embassy immediately," he said. "It might be easier to close the Palestinian embassy."

In the past, relations with Israel were not the most cordial. There were several crises and non-diplomatic declarations, such as when, in 2015, Brazil rejected Consul General of Israel in New York Dani Dayan as Israel's choice of ambassador to Brazil.

"What might change is the tone," said Kacowicz. "Bolsonaro will align himself very closely with Trump. And this means he will improve relations with Israel."

"From an Israeli standpoint," Kacowicz concluded, "we are going to see an improvement."