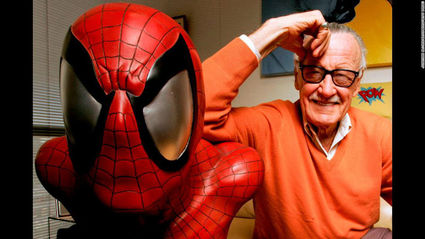 Stan Lee poses next to a Spider Man model at his office in 2008.

(JTA)-Stan Lee, who as one of the masterminds behind Marvel Comics created such mega-popular comic book franchises as Spider-Man, the Incredible Hulk and the X-Men, died early Monday morning at Cedars-Sinai Medical Center in Los Angeles. He was 95.

Born Stanley Martin Lieber in 1922, the son of a Romanian-Jewish immigrant father and what he once called a "nice, rather old-fashioned Jewish lady," Lee drew on themes of his childhood to create a series of memorable pulp heroes whose outsider status in some ways became their superpower.

Lee was a pioneer of a comic book industry dominated at its outset by hungry, second-generation Jewish artists and writers, and one of its most iconic figures. He also lived long enough to see it transformed into a multibillion-dollar film industry that has spawned countless blockbusters based on his characters, including Black Panther, the Mighty Thor, Iron Man, the Fantastic Four, the Incredible Hulk, Daredevil and Ant-Man.

Lee grew up in the Washington Heights neighborhood of Manhattan and attended DeWitt Clinton High School in the Bronx. In 1939 he was brought in to what would become Marvel-and became its interim editor at age 19-although it wasn't until the early 1960s that he and artist Jack Kirby (born Jacob Kurtzberg) teamed up to put their distinctive stamp on the industry then dominated by DC, which published Superman and Batman comics.

According to Arie Kaplan, author of "From Krakow to Krypton: Jews and Comic Books", Lee and Kirby created "a group of superheroes who weren't sunny or optimistic like rival company DC's heroes. One member of the Fantastic Four, Ben Grimm (aka The Thing) felt like a freak because cosmic rays had transformed him into an orange, granite-skinned monster. With Ben Grimm, Lee and Kirby were using a superhero as a metaphor for Jews, African-Americans, and other minorities."

In the introduction to the book "Disguised as Clark Kent: Jews, Comics and the Creation of the Superhero," by Danny Fingeroth, Lee wondered if the anti-Semitism he and other young comic book writers and artists experienced played a role in their art.

"[C]ould it be that there was something in our background, in our culture, that brought us together in the comic book field?" he wrote. "When we created stories about idealized superheroes, were we subconsciously trying to identify with characters who were the opposite of the Jewish stereotypes that hate propaganda had tried to instill in people's minds?"

Yet readers also appreciated the vulnerability and human scale of his otherwise outsized characters.

"His stories taught me that even superheroes like Spider-Man and the Incredible Hulk have ego deficiencies and girl problems and do not live in their macho fantasies 24 hours a day," Gene Simmons of the band Kiss, who immigrated to the United States from Israel as a child, said in a 1979 interview. "Through the honesty of guys like Spider-Man, I learned about the shades of gray in human nature."

In 1972, Lee was named publisher of Marvel, leaving the editing to others as he went about promoting the Marvel brand. He set up an animation studio in Los Angeles, and saw the company eventually grow from TV production into a multimedia giant that has dominated the movie box office. In 2009, the Walt Disney Co. bought Marvel Entertainment for $4 billion.

The most recent Marvel film, "Infinity War," is the sixth film in the Marvel Cinematic Universe to gross more than $1 billion.

In 2002, Lee published an autobiography, "Excelsior! The Amazing Life of Stan Lee."

After Joan, his wife of 69 years, died in July 2017, Lee's final few years were marked by a series of lawsuits over his fortune and allegations that Lee was a victim of elder abuse by a man handling his affairs. According to the Hollywood Reporter, Lee's estate is estimated to be worth as much as $70 million.

Upon hearing of his death, Lee's Jewish fans offered tributes on Twitter.

"In honor of the late great Stan Lee, born Stanley Lieber, you should all read 'The Amazing Adventures of Kavalier and Klay' by Michael Chabon, a novel about how American Jews invented superheroes, and why," wrote Peter Sagal, the host of the NPR game show "Wait Wait... Don't Tell Me!"

NBC News correspondent Benjy Sarlin described Lee as "a big source of cultural pride as a kid, both as a New Yorker and as a Jew. It meant a lot to me that so many great comic creators had similar biographies to my grandparents and that their world was reflected in the work itself."

Survivors include his daughter and a younger brother, Larry Lieber, a writer and artist for Marvel. Another daughter, Jan, died in infancy.