Amid Hezbollah counter-tunnel operations, IDF must be 'ready for deterioration' 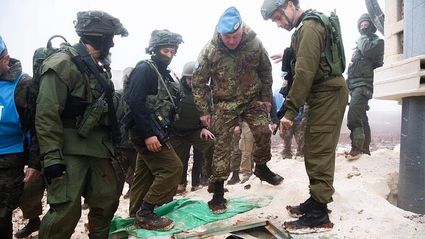 The head of the IDF's Northern Command, Maj. Gen. Yoel Strik, met with the @UNIFIL_ Commander, Gen. Stefano Del Col from Italy and toured the area of the cross-border attack tunnel that was exposed this week after it was dug from Lebanon into Israel.

(JNS)-As the Israel Defense Forces ploughs ahead with an operation to expose and destroy a network of Hezbollah tunnels snaking their way into northern Israel from Lebanon, the military must also be prepared for the risk of a sudden escalation with the powerful Shi'ite terrorist organization, a former senior defense official told JNS.

Maj.-Gen. (res.) Yaakov Amidror, who has served in the past as Israeli Prime Minister Netanyahu's National Security Adviser, said that the operation underway to expose the tunnels-built to infiltrate Israel's northern border-is aimed at neutralizing a component of Hezbollah's ability to launch a surprise ground attack into Israel.

This type of attack has not yet been seen in Hezbollah's combat against Israel, he said, and if Israel succeeds in getting rid of the tunnels, Hezbollah will be left without "an important component that gave it more confidence in a future war."

The counter-tunnel operation is part of a wider Israeli policy of building up deterrence, which includes taking away capabilities from the enemy, said Amidror. "While it is difficult to know if this will work, it certainly has a better chance when the other side knows it lost some of its capabilities," he stated.

Still, the situation is explosive, and the element of unpredictability remains, he warned. "Since this is a maneuver in which two sides are making decisions, it is impossible to know what the response of both will be-in other words, what Hezbollah will do further along the operation, and how will Israel respond afterwards. Therefore, the IDF must be prepared for a deterioration, to be prepared with lots of force."

According to IDF Spokesman Lt.-Col. Jonathan Conricus, the IDF is ready for just that kind of scenario. He said the military's "Northern Command is on elevated readiness, prepared for various contingencies," and cited an "enhanced troop presence."

Israeli civilians, however, are under no special instructions, and have been told to remain in a routine state of affairs.

Conricus noted that the tunnels have been under Israeli monitoring for about three years, and that Israel "chose to nip them in the bud now," after sufficient intelligence was gathered. Israel's counter-tunnel technology has proven itself on the Gaza border to the south, where it enabled the IDF to detect and destroy 17 tunnels in recent years, and has now come of age in the north as well.

Hamas shared its tunnel-building expertise with Hezbollah, and although both terror organizations dug structures deep underground with communication cables, oxygen ventilation systems and electricity, the threat is not identical. Hezbollah had to dig into hard rock, unlike Gaza's soft sand stone, and employed a different support system for the tunnels.

The tunnels were earmarked for Hezbollah's elite Rawan assault force, which the organization would have injected into Israel in a future war, for killing and kidnapping missions.

Conricus described the tunnel as the latest sign of the "adverse effect of Iranian entrenchment in the region. Hezbollah is strengthening its military capabilities while violating U.N. resolutions... this is funded by Iranian money and assisted with Iranian knowledge."

Professor Boaz Ganor, executive director of the International Institute for Counter-Terrorism (ICT) at the IDC in Herzliya, said the tunnels are part of a wider Hezbollah war doctrine developed over the past decade.

The doctrine "is based on two parallel efforts: projectile fire at Israel from Lebanon and possibly from Syria on a scale not seen in the past [including the launching of accurate missiles and large warheads], and a ground attack against the IDF in Lebanese territory and inside Israeli territory."

Within this doctrine, Hezbollah's special forces, combined with Iraqi Shi'ite militias, were supposed to infiltrate Israel, traveling through the tunnels along various routes on the Israeli-Lebanese border, from the Mediterranean Sea to Mount Dov, Ganor explained.

"These infiltrations are designed to seize civilian communities, forcing the IDF to dedicate military resources to solving large hostage crises, to disrupt the IDF's call-up of forces' system, and its movement of forces into Lebanon, by taking control of territory that enables control in the Galilee, and blocking central traffic arteries," said Ganor.

Israel's "Operation Northern Shield" is designed to deal a mortal blow to a central Hezbollah effort that the organization has invested major time and resources in, he added.

'The axis of evil of Iran-Syria-Turkey-Hezbollah'

Asked whether Israel's decision to neutralize the tunnels without escalating the situation into war was the correct one, Ganor said it was the right course of action in the short term. However, he cautioned, due to Hezbollah's massive arsenal of rockets and missiles-estimated at between 150,000 to 200,000-and the damage they will cause to Israel if and when Hezbollah opens fire at Israel, "it seems that Israel cannot allow itself for Hezbollah to initiate and begin a war, and it is incumbent on Israel to preempt and destroy at least a discernable part of the organization's long-range projectiles."

From this perspective, Ganor cautioned, Israel may have missed a justified opportunity to strike Hezbollah's military systems. This opportunity presented itself with the discovery of Hezbollah's violation of Israeli sovereignty, and in light of the threats to wage war on Israel and conquer parts of the Galilee by an organization that serves as an Iranian outpost.

The Iranians and Hezbollah, for their part, seem to be trying to understand the significance of the Israeli counter-tunnel operation, and to "assess the damage that has been caused to them," said Ganor.

"They will examine how many of the tunnels from those they prepared have been identified by Israel, in the hope that some will remain operational. The possibility that they will try to disrupt the Israeli operation by boobytrapping the tunnel must be taken into account, although it seems that at this stage, neither Hezbollah nor the Iranians have an interest in deteriorating the situation to an all-out war with Israel," assessed Ganor.

Ultimately, Iran has been able to take advantage of a mutual deterrence in place between Israel and Hezbollah. It has used this situation to continue to arm its Lebanese proxy, building military assets on Israel's borders from within Lebanon and Syria. "The military victory of the axis of evil of Iran-Syria-Turkey-Hezbollah, under Russian protection, provides a tailwind for these Iranian trends," said Ganor

It is reasonable to assume, he explained, that "a gun that appears in the first act will be fired at the end of the play. The unprecedented threat that is being built against Israel does not perhaps endanger its existence, but it could cause large-scale strategic damage to the state, the civilian homefront, infrastructure and critical facilities. As a result, Israel cannot accept the existence and growth of this threat."

A psychological boost to Israeli civilians in the north

Dr. Ely Karmon, a senior research scholar at the ICT, agreed, noting that the greatest strategic threat is "the huge ground-to-ground missile arsenal in Hezbollah's possession, and the present attempt by Iran to increase the number of long-range precise missiles, which could destroy Israeli military targets and infrastructure in the first attack."

The massive Hamas rocket fire in last months' round of fighting was a reminder of such a threat, he added.

Karmon described the exposure of the tunnels as a "very important intelligence and operational success, as it neutralizes the publicized Hezbollah plan to attack Galilee towns and villages." It also provides a psychological boost to Israeli civilians living near the northern border, who have been concerned by Hezbollah tunnel-digging for years.  Northern residents near the border with Lebanon have for years reported hearing sounds that they suspected came from Hezbollah digging operations. However, the IDF investigated those reports, and did not find that they led to tunnel activities. But Karmon noted that the larger threat remains Hezbollah's firepower.

"In the 2006 Second Lebanon War, Israel destroyed the much smaller arsenal of long-range missiles in the first 34 hours of the war, due to exceptional intelligence," said Karmon. "It seems me this cannot be done in the present situation in Lebanon, where the government is dominated by Hezbollah and its army is almost subservient, without a massive ground war-possibly a preventive war."