Of miracles and gratitude: 'Make new friends but keep the old...' 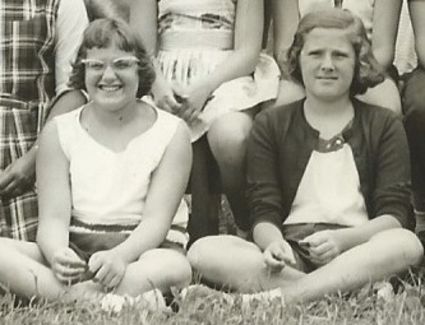 Marilyn Shapiro (l) and her friend Betsy Porter in 1961.

Two years ago, Peter and Margaret Hunter, friends from England, visited us in our home in Kissimmee, Florida. They brought two bottles of Moet Chandon Brut Champagne, which we tucked away for a future occasion.

This week, the Hunters were back in Florida, and Peter asked us if we had drunk the wine. When I told him it was still sitting in the box, he admonished me.

"That kind of wine doesn't age well," said Peter. "It doesn't last unless refrigerated properly. We'll pop it open next week before we head back to the other side of the pond!"

During Chanukah, we celebrate miracles: There was only enough oil in the Eternal Light to last for one day, but somehow, it lasted for eight. I was thinking about the Hunters and the wine in relationship to our upcoming holiday. Yes, Chandon Brut Champagne doesn't last long, but our friendship with the Hunters, that began on a Jamaican beach, gets better with age. And I began to reflect on special friendships in my life that miraculously have stood the test of time and distance between us.

In and Out of Touch

Betsy Odams Porter and I met in second grade and immediately became best friends. Betsy was beautiful, with thick red hair, and a single child. We spent hours at her home, playing with her Madame Alexander dolls. In seventh grade, Betsy and her family moved to Texas, and I was devastated. She and her parents came back for a visit when we were 16. A few years later, my father got the phone call that Betsy's father had died in a car accident. After that, Betsy and I shared an occasional letter. She reported that she had two sons, had divorced and gone back for her master's in nursing, and then had remarried. And then came Facebook. We reconnected, and in 2011, Betsy and her second husband visited Larry and me in Clifton Park. She still was beautiful, still had her gorgeous red hair, and still loved me. "My best friend!" she cried as we shared our first hug in over 40 years. She was the first friend to call me after the Pittsburgh tragedy to express her grief and outrage.

It took me a while to find a friend to be as close with as Betsy, but in high school, I met Chris Allen, who was a year behind me. Chris was brilliant and compassionate and a wonderful listener. We shared confidences and Simon and Garfunkel and lots of notes. She was the one who encouraged me to pursue writing, and she was the one who suggested we take a summer class at Plattsburgh State in 1967. For my high school graduation, she gave me a blank black journal in which she inscribed "For your writing." She was my soul mate. Unfortunately, we lost touch while we were in college. I didn't even invite her to my wedding, a decision I regret to this day. But two years ago, she came to visit me at my brother's cottage on Lake Champlain. We walked and talked for an hour and a half, and we hadn't missed a step. We still keep in touch with snail mail, and I will be in touch when I head north to visit family and friends.

I met my college roommate Denise Gorham Donato my first day of college, and we bonded immediately. Within a week, she nicknamed me 'PTuke,' a moniker that stuck through college and beyond. We were so different: I was intense, organized, and feverish in my need to complete every assignment with a few days to spare. Deni was outgoing, spontaneous, and the queen of the all-nighter. She worked several jobs, including one at Dom's sandwich shop on Central Avenue. When she came home around 11:30 p.m., I would wake up and we would catch up while munching on tuna subs she brought home in long white bags. Until this day, I can't smell an onion without thinking of our midnight snacks.

A month after our graduation, Deni married Phil and settled near Syracuse. Larry and I would visit her when we went out to visit Larry's Uncle Asher and Aunt Fran. The four of us went to a Syracuse University game in the snow and kept in touch with an occasional letter. After Asher passed away, Fran moved down to Murrells' Inlet near Myrtle Beach, South Carolina.

When we moved to Florida, Deni and I lost touch for a while. Last September, I sent a note to Deni, telling her about the publication of my second book and checking in with her. Both of us were shocked when we realized that she owned a condo only one mile from Fran's place in South Carolina. The four of us met for dinner this year when she and Phil came to Orlando for Phil's reunion with college friends. We plan on meeting up in Murrell's Inlet this winter when Larry and I visit Fran.

Lots to Talk About

Judy Lynch and I met in 1984, when her daughter Katie and my son Adam were on the same tee-ball team. We met up again when our two younger daughters bonded when they were on the same swim team. It is a friendship that has lasted over 20 years, through our children's high school years, through Katie's death from leukemia in 2009, and through the Lynch's part-time residence in Boston and our move to Florida. When we talk, we have to reserve one or two hours of free space. Our cell phones have often come close to losing battery power before we finish.

In 1987, a year after I had gone back to teaching at the Capital District EOC, Susan Hoff Haynes came on board as a new academic instructor. What started out as mutual hatred changed when Sue called to talk. We found out that our similarities were so much more than our differences. Along with our friend Melanie, we became 'The Three Amigas." Mel passed away from non-smoker's lung cancer the month before Larry and I moved to Florida. Sue has come down to see us for the past two years on Martin Luther King's Birthday and already made plans to make it three in a row this year. Each time she comes, she and I swim laps, attend a book club, talk politics, and share confidences, just like we have done since 1987. We don't miss a beat.

The Lights Continue to Glow 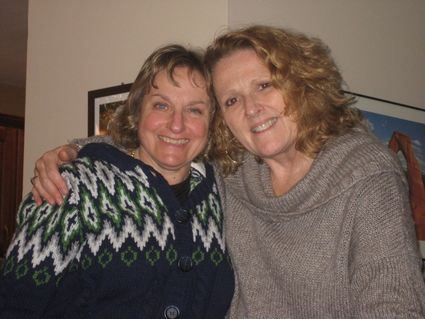 In 2008, Larry and I spent a week in Jamaica, where we met up with the Bunny Bunch, several couples who had already met over Easter Week at the same resort for several years. It was through our many visits to that Caribbean Island that the friendships grew. When Larry and I moved to The Sunshine State, we curtailed our Jamaican trips. However, members of the Bunny Bunch, including the champagne-bearing Hunters, now come to see us at Thanksgiving. Larry and I share our American holiday with fellow American, British, and Canadian friends.

Since moving to Kissimmee, Larry and I are grateful to have met many people in our 55 plus community, in our synagogue, in our greater community. As we celebrate the secular new year, I am grateful for the joy of establishing new friends. I am also grateful for the miracle of sustaining so many long-time friendships.

By the way, the champagne was great!