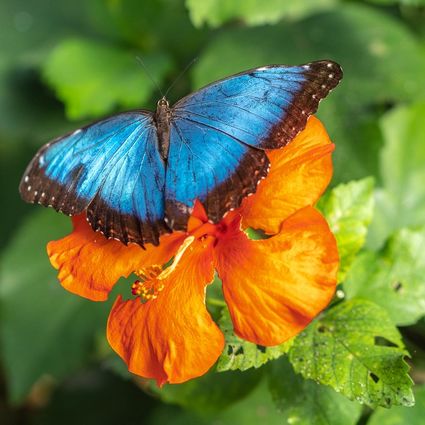 Butterflies. Beautiful butterflies. Blue. Yellow. Even black and white. I am so enthralled by them. But butterflies have a greater meaning to me than just their beauty.

In 1993, I read a book called "I Never Saw Another Butterfly," a collection of short pieces, poems, and drawings completed by the children in one of Nazi Germany's infamous concentration camps. The eponymous poem was written by Pavel Friedmann, a 21-year-old man who was transported to the Theresienstadt concentration camp on April 26, 1942.

Poem of the Holocaust

Seven weeks later, he inscribed a poem on a thin sheet of paper, describing his looking out beyond the barbed wire fence, beyond the camp, beyond "my people." He sees a butterfly, what he calls "The last, the very last, /So richly, brightly, dazzlingly yellow...vOnly I never saw another butterfly. /That butterfly was the last one. /Butterflies don't live in here/in the ghetto."

On Sept. 29, 1944, Friedmann was deported to Auschwitz, where he perished. His poem was discovered after liberation and later donated to the Jewish Museum in Prague.

I was drawn by the power of the poem, the image it created in my mind: An emaciated young man in ragged black and white striped pajamas looks out of the barbed wire fence. Everything in the picture is in black and white-except for that one beautiful yellow butterfly.

Since then, Friedmann's butterfly has symbolized to me the spirit of the six million Jews who were murdered in the Holocaust. Each time I see a butterfly, flitting from flower to flower and sometimes even landing on me, I am reminded of all those lost lives.

And I believe they are with me. In July 2017, my husband Larry and I were taking a hike on one of Colorado's mountainous trails. At one point, we were going up a narrow, steep path-too steep for my wimpy tastes. Under my breath, and then a little louder so that Larry could hear me, I whispered, "I'm scared! I'm scared." At that moment, a butterfly flew in front of me. Was it the six million leading me up the path to safety?

The image of butterflies was also seared into the mind of Dr. Elizabeth Kübler-Ross. The world-renown psychologist known for her research on death and dying visited the Maidenek concentration camp in 1946. The now empty children's barracks were filled with abandoned toys and shoes. On the walls, Kubler-Ross saw hundreds of butterflies that had been scratched and etched with fingernails and pebbles. Twenty-five years of working with the dying, Kubler-Ross made the connection. "The children knew they were going to die and were leaving their message of hope," Kübler-Ross later recalled. "Their bodies might not make it, but the butterflies represented their immortal souls. They would live on in a different form."

The symbol of the butterfly also took on a special personal meaning for Gail Danziger Klein, a member of Colorado's Synagogue of the Summit. Her mother, Renee Rosenberg Danziger, had survived the Holocaust, but Renee's little sister had perished. The only surviving memory was a picture of eight-year-old Lilli, dressed in a butterfly costume. Inspired by the black and white photograph, author Ann M., along with Renee's daughter Gail, co-authored "Music of the Butterfly: A Story of Hope." The children's book recounts how "Little Renee" used her imagination and her love of music to survive, first in the ghetto and later in Auschwitz concentration camp. Patricia Hardwick's beautiful illustrations use the metamorphosis of the caterpillar into a butterfly as the metaphor for keeping hope alive despite incredible obstacles and atrocities.

Barnes and Noble praised the book for teaching the importance of "standing up for what is right and the knowledge that tomorrow can bring a better day."

Fred Zeidman former chairman of the Board, U.S. Holocaust Museum, Washington, DC, said that the book was "an important addition to Holocaust literature for the young, and should be a go-to resource for parents and teachers seeking to make this difficult subject understandable to children."

As a Jew brought up in the aftermath of World War II, I have known anti-Semitism. I have experienced it first-hand through slights and rejections and insults. Furthermore, I have gained a greater understanding through reading and watching both fictional and non-fictional accounts that describe in detail the history of my people and its numerous encounters with those who wish to destroy us. Personal fears of being physically harmed, however, were never in the forefront of my mind. Yes, when we sat in our synagogues-whether it be in Upstate New York or in Central Florida, I have often sensed concern that maybe, just maybe, our service would be interrupted by an individual with a gun. But I would assure myself, "This is America. We are safe."

Or were we? In August 2017, at the "Unite the Right" rally in Charlottesville, Virginia,  Neo-Nazis marched in the streets, chanting racist and anti-Semitic slogans, including "Jews will not replace us." In February 2018, the Anti-Defamation League documented in its annual report a 57 percent increase in anti-Semitic episodes, including harassment, vandalism, and assault, in the United States in 2017. The increase was the largest in a single year since the ADL began tracking in 1979. "The diminishment of civility in society creates an environment in which intolerance really can flourish," said Jonathan A. Greenblatt, the ADL's chief executive. Social media platforms, he added, have "allowed the kind of poison of prejudice to grow at a velocity and to expand in ways that really are unprecedented."

And then came Pittsburgh. While Jews were participating in a Shabbat morning service, a gunman shouting "All Jews must die!" killed 11 innocent victims. Synagogues around the country immediately upped their security measures.

Suddenly for me, "This is America. We are safe" was no longer true.

Since 1945, "The Six Million" has always been the number that represents all who died in the Holocaust. In my mind, the number is now Six Million and Eleven.

Look at my neck. Sitting on a chain is a blue enamel butterfly. Look at my ears. Often my usual small gold hoops are replaced with butterfly earrings-silver or blue or purple or mosaic. Walk out to our lanai, and you will see two butterflies on the wall over our flowers. A butterfly garden, planted just beyond the lanai screen, draws the beautiful creatures to my yard. Butterflies surround me, as does the memory of the Shoah and now of Tree of Life. They remind me to heed the warnings from those who fight hate, prejudice, racism, xenophobia, denial, and most importantly-indifference. Never again.

Marilyn Cohen Shapiro, a resident of Kissimmee, FL, is a regular contributor to the (Capital Region NY) Jewish World and the Heritage Florida Jewish News. She is the author of two compilation of her stories, "There Goes My Heart" (2016) and "Tikkun Olam." Marilyn Shapiro's blog is theregoesmyheart.me.