With SpaceIL launch, its to the moon and beyond for Israel 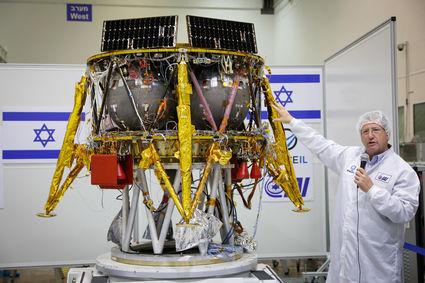 (JNS)—In 2019, a team of Israelis will make history when an unmanned spacecraft they built will launch from Cape Canaveral, Fla., destined for the moon.

SpaceIL, an Israeli nonprofit organization, has teamed up with defense giant Israel Aerospace Industries (IAI) to build the spacecraft. When it touches down on the lunar surface, Israel will join an exclusive club consisting of the United States, Russia and China, which have sent spacecraft to Earth’s nearest neighbor.

“This is a major source of pride,” Ofer Doron, general manager of IAI’s Space Division, told JNS. “If the small State of Israel can do this through a civilian mission, then the sky and space are not the limit. Israeli children can dream about reaching the moon and taking on the next challenge.”

“This is a story of initiative and Israeli daring, which allows us to do the unbelievable. It’s a highly complex technological mission, with many challenges,” he added.

The story of Israel’s journey to the moon began in 2010, when Google announced its Lunar Xprize for the first team that would land a spacecraft on the moon. The contest spurred three young engineers—Yariv Bash, Kfir Damari and former IAI employee Yonatan Winetraub—to build, launch and land an unmanned lunar spacecraft, and founded SpaceIL.

SpaceIL’s other stated goal is to inspire the next generation in Israel and around the world to study science, technology, engineering and mathematics. The NGO then attracted a $100 million donation by Morris Kahn, a philanthropist and businessman, as well as donations by Dr. Miriam and Sheldon Adelson, and others.

SpaceIL’s educational programs have reached approximately a million Israeli pupils so far. At the same time, engineers from IAI and SpaceIL got to work building the spacecraft at IAI’s Space Division.

“Infrastructure and technological know-how are needed for this project,” said Doron. The unique cooperation between a startup NGO, whose business model is based on donations, and a large defense corporation enabled the project to literally take off.

‘Once on the moon, it will conduct scientific experiments’

No team that entered Google’s competition managed to get a spacecraft to the moon in time for the deadline, but that has not stopped the Israeli initiative. The Israeli craft is due to launch in the first quarter of 2019 on a SpaceX Falcon 9 rocket to an altitude of 60,000 kilometers. From there, it will enter a series of widening orbits, which will land it on the moon’s Sea of Tranquility region after two months.

“We have calculated the precise route that will take it on a lunar orbit,” said Doron. “Once on the moon, it will conduct scientific missions with the Weizmann Institute of Science [based in Rehovot, Israel], checking the moon’s magnetic fields.”

The lunar spacecraft has also recently been fitted with a laser reflector that will allow NASA to have a precise reference point on the moon.

“We think it will be active for a few days, before intense heat overcomes it,” said Doron.

But the spacecraft will also have a more enduring mission after being fitted with a time capsule that will remain on the lunar surface indefinitely.

It consists of three discs, each containing hundreds of digital files, including national symbols, like Israel’s Declaration of Independence, the Bible, Israel’s national anthem and the Israeli flag. It will also contain cultural objects such as paintings, collected over many years from the public for sending to the moon; dictionaries in 27 languages and encyclopedias, such as Wikipedia, to reflect knowledge accumulated by all of humanity thus far, Israeli songs, the “Wayfarer’s Prayer” and photographs of Israeli landscapes.

“With no plans to return to Earth, the spacecraft and information within the time capsule’s disks will possibly be found and distributed by future generations,” said IAI.

“This is another step on our way to the moon,” said Ido Anteby, CEO of SpaceIL. “Inserting the disks into the spacecraft, which is a real ‘time capsule,’ indicates the spacecraft’s readiness to blast off from the launch site in a few weeks. SpaceIL’s crews and IAI have completed testing of the spacecraft and its systems, and are preparing for the beginning of the amazing and complex journey that exemplifies innovation, creativity and courage.”

Yonatan Winetraub, one of three SpaceIL founders, placed the time capsule into the spacecraft on Dec. 18. “This is a very emotional moment. We do not know how long the spacecraft and the time capsule will remain on the moon,” he said. “It is very possible that future generations will find this information and want to learn more about this historic moment.”

The spacecraft, which weighs only 600 kilograms, will be the smallest to land on the moon. Most of this weight is fuel, and it will number only 150 kilograms when it lands. Its maximum speed will exceed 36,000 kilometers an hour.

Doron concluded that “ultimately, this is a badge of honor for Israel’s space capabilities.”