Israel's border fence with Egypt has transformed the south 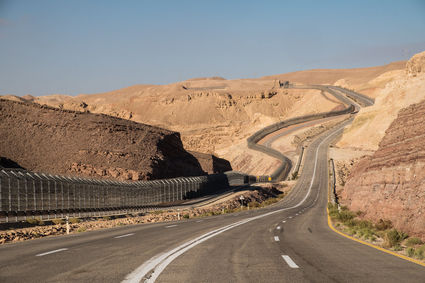 (JNS)-This time six years ago, Israel completed its high-tech border fence with Egypt, marking the start of a transformation in the situation along this restive frontier.

With its network radars and cameras, the obstacle-dubbed "Hourglass" by the Israeli Defense Ministry-issues alerts to Israel Defense Forces units regarding suspicious movements.

Israeli, who lectures at the Institute for Policy and Strategy at the Interdisciplinary Center in Herzliya, said the quantity of human trafficking "is almost zero now."

In addition, the fence has significantly boosted Israel's ability to defend itself against Salafi-jihadist terror organizations that are active in Egypt's Sinai Peninsula, he added.

"The obstacle separates two entities: Israel and Egypt. Today, inside Egypt, there are groups that view Israel as a target for attack. Here, too, the fence has managed to decrease friction both because of the physical obstacle, which is difficult to overcome, and because of the sensors installed on it," said Israeli.

The setting up of dedicated IDF units whose goal is to patrol the fence and prevent cross-border infiltrations into Israel, is a major part of the barrier's success, he stated. A positive side effect has also been the decrease in cross-border narcotics-smuggling, according to Israeli. "The quantity of drugs coming has significantly dropped," he said.

Professor Hillel Frisch, a political scientist from Bar-Ilan University in Ramat Gan, and an expert in Middle Eastern affairs, said part of the barrier's effectiveness comes from Egyptian-Israeli security cooperation.

"There is likely a lot of Egyptian support for curtailing this immigration because it's their problem as well," said Frisch. "It's also effective because it's very sparse country, and there are no major population centers along either side of the border."

Frisch added that "the fact that there are no population centers nearby allows the barrier to be militarized."

The model of advanced border barriers is spreading. In May last year, Israel announced that it completed the construction of a 34-kilometer border fence between southern Israel and Jordan. The unusually tall structure towers to a height of 26 meters, and is designed, among other things, to protect civilian aircraft landing at the newly built Ramon International Airport at Timna against the threat of Kornet missile attacks.

"The fence along Jordan works because there's cooperation between the two sides. That is a very important variable," said Frisch.

According to Israeli, "in general, the State of Israel has adopted the model of border barriers. We are seeing similar fences expanding to other areas, including on the Lebanese border," he added.

The primary goal of barriers on dangerous borders like Lebanon and Gaza is "not to stop civilians, refugees or illegal migrants, but to defend against hostile elements on the other side," said Israeli. On the other hand, such obstacles have led Israel's enemies to come up with creative ways to overcome them, such as the combat tunnels dug by both Hamas and Hezbollah.

"We saw that on the Gazan border, Israel responded by developing an underground barrier that goes down to a depth of tens of meters, to deal with the tunnel threat," noted Israeli. "But Hamas is trying to overcome the barrier with rockets. If we look at the north, we see that there, too, Hezbollah is working to get over the barrier with tens of thousands of projectiles. This is the negative aspect-the other side always looks for a way around the fence," he said.

Around the world, border barriers seem to be in vogue. Hungary built one on its borders with Serbia and Croatia in 2015 to deal with an influx of migrants. Turkey is barricading its troubled border with Syria with a wall and fence. And Saudi Arabia is building a massive 1,600-kilometer fence on its border with Yemen.

Meanwhile, in the United States, President Trump has controversially cited the Israeli-Egyptian barrier as a model for the wall he wishes to build on the Mexican border-an issue that has led to a political feud with the Democrats, leading to an ongoing government shutdown.

"The U.S. and Mexico are not hostile entities," said Israeli. "There is a wish to prevent human trafficking from Mexico, where Latin American migrants, as well as migrants from other countries, pour into. If they set up a significant obstacle that is high-quality with sensors, it will be extremely costly because the border is over 3,000 kilometers long."

The great distances between the stations that monitor the barrier would mean that it would not be fool-proof in stopping the migration flow, explained Israeli. "The question is whether the U.S. is willing to invest this huge sum."

Frisch agreed that such a barrier on the U.S.-Mexican border would be far from being hermetic. "The migrants that would reach it are the most entrepreneurial kind of people," he said. "The people who manage to cross it will be the best and the brightest."