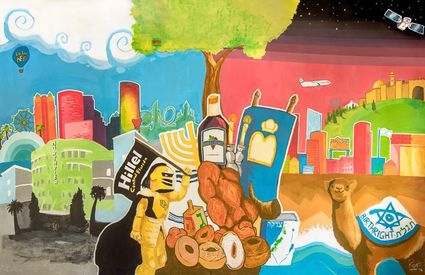 The mural Rafi designed that is on a wall in the Hillel building at UCF.

Almost every year during Passover, Rafi Layish's family would watch "The Prince of Egypt," an animated movie about the Exodus. He loved it.

"It was a really cool movie all around for animation, soundtrack," said Layish. It was also the inspiration for what he wanted to do with his future.

He loved the newspaper comics, too. "Pearls Before Swine" was one of his favorites. When he was a child, he and friends would spend hours drawing pages and pages of comics. And even today if he thinks of a funny gag that can be done in three or four panels, he'll draw it.

"The movie 'Spiderman: Into the Spider-Verse' was a real game changer for me because it presents animation in a different way," he said. Now 21, Layish is in his fourth year at UCF, majoring in experimental animation. He hopes to one day be involved in the pre-production process-planning, sketching and story boarding for films and television.

It always helps to have a paying job doing what you love while on your way to your goal, or as Layish says it, "It's not the X on the map, but like the compass, something to follow, putting me on the track to where I'm going." Layish is the illustrator of a just published book, "Hidden Wings of the Time Keeper" by Briana R. Gilbert, the first in "the Contrary Collection" series.

Author Gilbert found him through Facebook. "She was looking for an illustrator for her book and I applied!" said Layish. "I like to create and enjoy creating characters and stories. But the thing is, I'm not a great writer. My strong suits are more toward the artistic side of it, so I'm always looking for people to collaborate with."

This collaborative team is working well. "She had solid ideas of art that she wanted," he said. So after several talks and many drawings they got on the same page (no pun intended). Layish plans to illustrate several more books with Gilbert in the Contrary Collection.

This isn't the first time Central Floridians have seen his work. Layish, who is the son of Nancy Layish of Maitland and Dan Layish of Orlando, grew up in Maitland. He attended the Hebrew Day School and Edgewater High School's engineering, science and technology magnate program. His family were members of Congregation Ohev Shalom. When Layish was in Scouting, his Eagle Scout project was to design a mural on a wall at Longwood Elementary School. An Eagle Scout project has to demonstrate qualities of leadership and management, so Layish couldn't just draw his mural. He recruited friends and family to help him with the project. He designed the work, sketched the outline on the wall and directed his helpers to "fill it in." The project was to raise money for Families in Transition, an organization the helps homeless children in Seminole County reach their educational potential.

Another Layish mural is on the wall on the second floor of the Hillel building on the UCF campus. According to Aaron Weil, CEO of Central Florida Hillel, it is a "one of a kind, iconic piece of art that is now the most photographed image in our building." 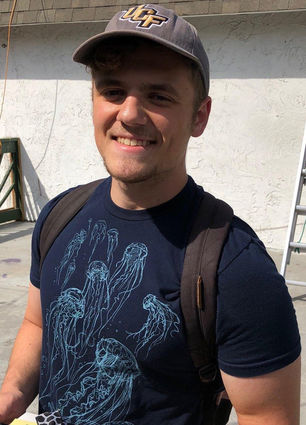 The iconic work came about because Rafi commented to Weil about the plain grey walls. "I asked him what he thought that we should do about it," Weil shared. "He answered that perhaps we could do a mural... It really encompasses the mission of Hillel through art, and specifically, through the eyes of student artist Rafi Layish."

The mural has been reprinted for holiday cards and email campaigns for Hillel.

Layish is currently working on his portfolio and would like to gain entry level professional experience and eventually move into the field of digital media. He is always looking for more "stuff to do" and posts his art through Instagram, @rafi.layish. His artwork can be seen at http://rafaellayish.foliohd.com

"Hidden Wings of the Time Keeper" is available at http://thecontrarycollection.com

"I'd like to see a movie come out with my name somewhere in the credits," Layish said with a big smile. It probably will happen.