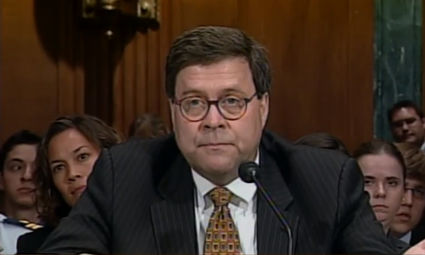 William Barr speaking to the Senate Judiciary Committee on June 15, 2005.

William Barr, who served in the same role under the late President George H.W. Bush, is scheduled to face the Senate Judiciary Committee on Tuesday and Wednesday.

"We endorse his nomination for attorney general. We know that he has exhibited sensitivity to protecting religious rights in the workplace," National Council of Young Israel president Farley Weiss told JNS. "He is clearly very well-qualified having previously been attorney general. We look forward to working with him."

Progressive groups such as Bend the Arc: Jewish Action and the Jewish Democratic Council of America expressed opposition.

"The attorney general must be an independent voice for the rule of law, a role that is more important today than ever before given President Trump's authoritarian behavior," Rabbi Jason Kimelman-Block, Washington director of Bend the Arc, told JNS. "William Barr's deeply troubling views on executive power, racial justice, immigrant rights, religious freedom, reproductive justice and LGBTQ rights raise serious doubts about his commitment to equality under the law."

"As the Senate begins confirmation hearings this week, JDCA has deep concerns with William Barr's nomination as U.S. attorney general," the organization told JNS. "Specifically, we are concerned about his lack of transparency with Congress and willingness to adhere to rule of law as it relates to holding President Trump fully accountable for possible violations of the law. The independence of the attorney general and the Department of Justice must be paramount."

However, organizations such as the Republican Jewish Coalition and Agudath Israel disagreed, and instead applauded the nomination.

"Agudath Israel of America congratulates President Trump on his nomination of William Barr to serve as the next attorney general of the United States," the group said in a statement published by Baltimore Jewish Life.

"From 1991 to 1993, Mr. Barr served as attorney general in the administration of President George H.W. Bush, and Agudath Israel had occasion to work closely with him on issues of concern to the Orthodox Jewish community," they added. "He proved himself to be a great champion of religious liberty, as he took a leadership role in protecting the civil rights of Orthodox Jewish communities that were encountering harassment and discrimination."

Accepting an award from Agudath Israel in 1992, Barr said: "Freedom of religion requires not only freeing religion from undue government regulation and interference. It also requires freeing religion from discrimination and from vile acts of hatred and persecution. That is why I am so concerned by instances of anti-religious activities and hate crime, and particularly by the increasing level of anti-Semitic incidents in this country. The Anti-Defamation League reports that 1991 was the fifth consecutive year of increased anti-Semitic acts nationwide."

Although he is likely to be grilled by the Judiciary Committee about his remarks on Special Counsel Robert Mueller's probe of possible collusion between the Trump campaign and Russia in 2016, Barr is expected to be confirmed with bipartisan support.