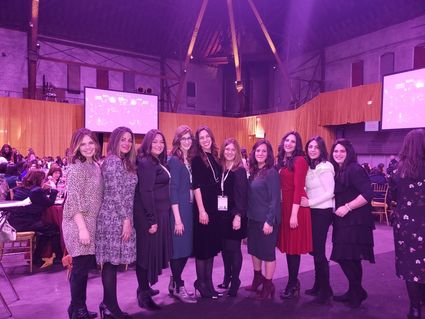 Last weekend, 10 representatives from Orlando joined more than 3,000 women leaders from all 50 U.S. states and 100 countries, hailing from as far away as Laos and Angola, Ghana and Uzbekistan, at the International Conference of Chabad-Lubavitch Women Emissaries (Kinus Hashluchos) in Brooklyn, N.Y.

The annual event was aimed at reviving Jewish awareness and practice around the world. Preconceived notions about the insular role of women in Hasidism were shattered as thousands of women from around the world, each serving in crucial leadership positions, gathered for five days of brainstorming about the future of world Jewry and their roles as representatives of the Chabad-Lubavitch movement.

The leaders-who embrace multiple roles and responsibilities-explored relevant issues, and learned from professionals and colleagues with years of experience. The topics covered ran the gamut of their concerns: understanding troubled relationships; adult education, inclusion; responding to tragedy; fundraising; the opioid epidemic; mental health; and a conference within the conference for Hebrew school and preschool directors, as well as one for those who serve students on college campuses, ensuring a lasting impact on the next generation of communal leaders. The conference also included a parallel track for lay leaders.

Additional highlights of the five-day conference were a visit to the gravesite of the Rebbe, Rabbi Menachem M. Schneerson, of righteous memory, in the New York City borough of Queens; the "class picture," where the women posed for a group photo; as well as the gala banquet, where they were joined by admirers, supporters and influential women leaders for a sit-down dinner.

The conference is a tribute to the legacy of Rebbetzin Chaya Mushka Schneerson, the esteemed wife of the Rebbe, and is timed to the anniversary of her passing.

"This is especially meaningful to me, as the Rebbetzin is my namesake," said Mussie Bronstein, co-director at Chabad of Altamonte Springs.

"Rebbetzin Schneerson's deep care for and insight into our work remains a source of inspiration to us women emissaries," added Bronstein.

The conference also serves another vital purpose: It represents an opportunity to connect with colleagues, and recharge their personal energy. This gives the participants, especially those going back to far and isolated outposts, an exhilarating send-off, coupled with the sense that they are not alone.

Another dimension to the conference was networking.

"This weekend fills me with the inspiration I need for the rest of the year to lead my community in the best way possible," said Shlucha Chani Konikov, co-director at Chabad of South Orlando.