How a Jewish brother and sister are making political history 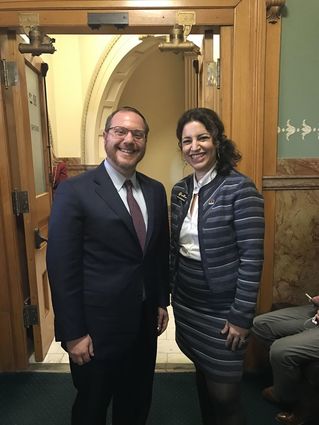 Rabbi Yehiel Kalish attending the swearing-in of Dafna Michaelson Jenet, his sister, at the Colorado House of Representatives in Denver, Jan. 11, 2017.

(JTA)-Only days after being sworn into the Illinois House of Representatives on Sunday, Rabbi Yehiel Kalish paid a visit to Israel. The father of six said he needed guidance from rabbis in the Jewish state to serve in his new role.

"The immediate reaction of the Chicago political world was 'Orthodox rabbi chosen for seat in state legislature,'" he told JTA on Wednesday in a phone interview from Jerusalem.

"So that immediately put a microscope on me, and I felt pressure taking the position to begin with, and with that added to it, I felt I needed a little bit of help, so I jumped on a plane [to] give a little bit of strength to my prayer by being in Israel."

The 43-year-old rabbi, who was appointed to serve in the position after Rep. Lou Lang announced his resignation earlier this month, also has a source of guidance a bit closer to home. Just a few state lines over he can consult fellow local lawmaker Dafna Michaelson Jenet, who has been serving in the Colorado House of Representatives since 2017.

Michaelson Jenet also happens to be Kalish's older sister, and he says they have been talking every day since he took office.

"She can be helpful because she's two years ahead of me, that's one thing," Kalish said. "The other thing is that I have someone that I can talk to about stuff. That's awesome."

Jeffrey Wice, the executive director of the National Association of Jewish Legislators, told JTA that he believes the pair are the first Jewish siblings to concurrently serve in different state legislatures since his organization's founding in 1977.

The siblings, who grew up in Cincinnati, are Democrats. Jewishly, Kalish is deeply involved in the Orthodox world and Michaelson Jenet attends two Conservative synagogues. They are united by their commitment to serving their communities and the inspiration they draw from Judaism.

Kalish wakes up at 4 a.m. each day and spends two hours studying Jewish texts before doing the morning prayers.

"It keeps you focused on what's important," he said. "To try to keep values important, try to remember that you're not alone in this world and you have to care for others."

After receiving his rabbinic ordination from the Hebrew Theological College in Skokie, Illinois, in 1999, Kalish spent three years studying Jewish texts at the Cincinnati Community Kollel and then took a job at Agudath Israel of America, an organization that lobbies on behalf of the haredi Orthodox community. He worked there for 12 years, serving as Midwest Regional director and vice president for development and state relations.

In 2014, he left the organization to co-found a consulting firm, but he remains a member of its board of trustees. Kalish also is involved in Achiezer, a group that provides aid to struggling members of the Orthodox community, and coordinated its hurricane relief efforts after Hurricane Sandy. He also serves as the cantor of Congregation Shaarei Tzedek Mishkan Yair in Chicago.

His district is about 30 percent Orthodox Jewish, he told JTA, and includes Skokie and Rogers Park.

As a lawmaker, he is passionate about issues that matter to the Orthodox community, including support for private religious schools and community nonprofits. But he's also eager to learn more about other communities in his district-it has large Asian, Assyrian Christian and Muslim populations-and said he is "starting a listening tour" to hear about their concerns.

Kalish says he met recently with representatives from the Chicago Teachers Union and Planned Parenthood.

Like her brother, Michaelson Jenet, 46, took an unconventional path to politics. In 2008, she quit her job at a hospital to embark on a yearlong journey in which she visited each of the 50 states to meet with people making a difference in their communities. She kept a blog documenting her experience, which caught the attention of writer Maya Angelou, who interviewed her about the initiative on Oprah Radio.

In 2015, while working on a book about her trip, Michaelson Jenet ran into a local politician who suggested she run for office. A year later she defeated the Republican incumbent, JoAnn Windholz, by an 8 percent margin. She was re-elected last year, both times earning the endorsement of President Barack Obama.

Michaelson Jenet draws inspiration from Judaism. She recalls that as a 14-year-old, her parents and their friends would have passionate discussions around the Shabbat table about the challenges in Cincinnati. She was troubled, however, that they didn't take action when the day of rest had come to an end.

"I truly believed that they had the answer to the problems that I cared strongly about, that were plaguing our community, and they didn't fix them," Michaelson Jenet told JTA in a phone interview last year.

She pledged to never complain about problems unless she was willing to solve them. It's a promise she called "a driving factor" in her life.

Her legislative focus-helping struggling children-stems from the difficulties of her now teenage son, Eytan. He has a severe learning disability, and Michaelson Jenet believes the fact that he could not get an individualized education plan in school contributed to his attempted suicide at age 9. She has introduced bills to help children obtain mental health services, expand free school lunches and provide sexual abuse prevention training to early childhood providers.

Though her family was Orthodox, Michaelson Jenet remembers struggling with her faith since she was young. Another challenge came when she met her now-husband, who is not Jewish.

"Why do you put this man in my life who isn't Jewish and is the best thing that ever happened to me? Clearly he's my bashert," she remembers asking God on a visit to the Western Wall in Jerusalem, using the Yiddish word for soulmate.

Their marriage led to several family members cutting ties with her. Michaelson Jenet calls her husband, Michael, "the greatest enabler of my faith."

Michaelson Jenet said her younger brother's run for office came as no surprise.

"My run for public office surprised my family, but my brother's selection was a long time coming," she told JTA in an email. "I always knew he'd enter public service when the time was right and Illinois is so lucky to have him. I look forward to mentoring him and learning from him as he grows in his legislative work."