'Berrie' exciting! A story based on Israel's launching a spacecraft to the moon 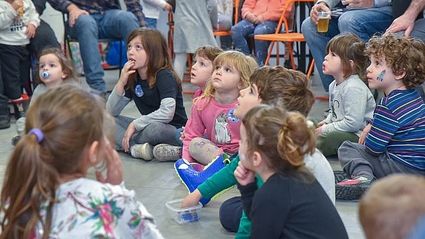 Israeli children at the book launch for "The Little Spacecraft," a picture book written by StellarNova co-founder and COO Yael Schuster.

(JNS)-What do you get when you toss in a bit of "Toy Story," The Little Engine That Could and The Magic School Bus book series? An optimistic (and very blue) "Berrie," a spacecraft with her eyes set on reaching the moon.

But "Berrie" has the odds stacked against her. As far as spacecrafts go, she's pretty small and can't pack the energy punch necessary to launch her into orbit. But she has come up with many innovative ways to compensate for it-strategic collaborations, solar panels, tracking devices and compact jet fuel tanks to get her where she needs to go.

So, like the startup nation that made her, she's undeterred.

"Berrie," short for "Beresheet," is a fictional likeness of SpaceIL's 180-kilogram spacecraft that to launched to the moon on Feb. 20. Her story of defying the odds is told in The Little Spacecraft, a picture book written by StellarNova co-founder and COO Dr. Mom, aka Yael Schuster.

"People who have read it have fallen in love with the story in an emotional and educational way. They see 'Berrie' and learn what we're trying to teach them about the spacecraft," Schuster told JNS.

Considering the plethora of knowledge that can be found through space exploration, the StellarNova team hopes the SpaceIL launch and their work can help spark interest for budding scientists across the country.

"It's not just aerospace, but it's mechanical engineering, botany, chemistry... it touches on every part of science. I think riding on the coattails of this big launch is an opportunity to get kids excited about space again," said Schuster.

That enthusiasm was evident recently on a Sunday evening in Tel Aviv, when young kids eagerly gathered to hear the story read out loud to them. With "Berrie's" vibrant blues and purples emblazoned on the children's cheeks thanks to a face painter, they oohed and ahhed at 'Berrie's' preparations for her journey that is literally out of this world.

The message of dreaming big resonated with the children whose ages ranged from approximately 2 to 7 years old-the perfect age when children are not so beholden to societal expectations and are easily impressionable.

"We believe in showing kids that they should follow their dreams and science can be exciting. We were looking for a way to reach children and this is the age, research shows, that can really make an impact," Kfir Damari, SpaceIL's co-founder said of their partnership with StellarNova and the genesis (pun intended) of "Berrie's" story.

As a mother of three boys, Schuster is dedicated to teaching her kids that science is exciting and open to everyone. She, along with her partner Margot Stern (who has two children of her own), launched StellarNova with the idea of having children in Israel and beyond fall in love with the wonders of science's infinite universe.

"I definitely have a crush on Ms. Frizzle!" Schuster gushed. "I have earrings like Ms. Frizzle. Her enthusiasm, which made so many kids fall in love with her and science, is something I'd like to share. I know she's a fictional character, but to me, she's real."

A for-profit company, they have several product lines targeted to children from grades three through 12. Their lesson plans, for example, which are aligned with common-core curriculum standards, have been adopted by 12 schools in Montgomery County-an economically and racially diverse suburb outside of Washington, D.C.

'An allegory for the country'

The all-women-led start-up is a rarity in the high-tech world both in Tel Aviv and Silicon Valley, where, according to Bloomberg News, a dismal 10 percent of women have snagged leadership positions in an industry that is notorious for being an all-boys club.

Why such a gender disparity?

"I think a lot of it comes down to some fundamental attitudes and biases that we have about who should be doing what jobs," Schuster says, which is why she believes the StellarNova message of science for all is critical for the next generation.

"This is a global problem," Stern lamented. "There are many women professional groups-we are a part of a number of them-and now you're seeing this movement where women are starting to speak up and go after these leadership positions. It's great that people are finally waking up. Because when you have a balanced team with women at the table, let alone multiple women, it makes a big impact."

And StellarNova has made its own impact since 2016, when it won the Diamond Award in MassChallenge's annual startup competition and scored NIS 300,000 in zero equity prizes.

The company was selected over hundreds of others in MassChallenge's highly selective annual competition that looks for startups striving to make a big splash in their respective fields.

"Our primary focus is looking for startups that will have a serious impact, but it's up to the startup to define what that impact will be," said Josh Gottesman, MassChallenge's Senior Product Manager in Jerusalem.

As such, StellarNova's goal of empowering children of all ages and backgrounds to reach for the stars was a natural fit for the MassChallenge vision.

"Their mission is something we totally align with-bringing more women into innovation, tech and entrepreneurship, and creating positive role models for young girls and boys. The goal of the company is clear and powerful. In the long-term, who knows? Maybe they could very well be producing Saturday-morning cartoons at a TV near you," Gottesman mused.

While there are no plans for her to be a cartoon yet, "Berrie's" innovative resourcefulness will be tested as SpaceIL's spacecraft readies itself for its launch to the moon from Cape Canaveral, Fla., on Feb. 20. Should the landing go as planned, Israel will join the elite club of only three countries-the United States, Russia and China-that have made it to the moon and back.

But in many ways, "Berrie's" story is not just about Israel's journey into space, but is an allegory for the country itself: Despite its size, it has managed to accomplish feats far beyond what anyone could have imagined.

"I'm Jewish and made aliyah by myself," said Stern. "The miracles that have happened in this incredible place in such a short amount of time are incredible. I continued to be awed that this is my home every day. If my small company can in any way even remotely be connected to those things, then that is very gratifying."