A mitzvah marathon in remembrance 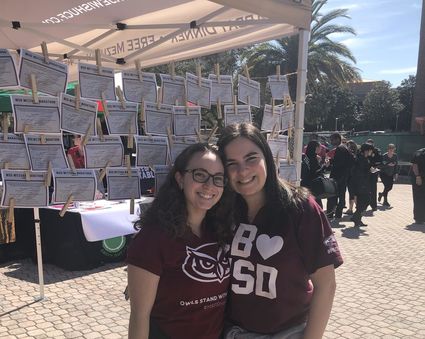 Standing in front of the Mitzvah Cards are Lauren Saslov (l) and Dani Kraut.

Earlier this month, I and a few other Stoneman Douglas graduates, had a meeting at Chabad at UCF. As we knew that the first anniversary of the Stoneman Douglas shooting was coming up and that Feb. 14 would be a difficult day for many, we wanted to create an event that would not only spread positivity and growth, but that would also bring the community together. Within minutes, we thought of a great idea: Let's give students the opportunity to do mitzvot-good deeds.

We came up with several meaningful mitzvot that people could perform, and let the students choose which good deeds they would like to do. This is how The "Stoneman Douglas Mitzvah Marathon" came about.

On Feb. 14, Chabad set up a tent in front of the Student Union, the heart of the UCF campus. The tent featured stacks of "Mitzvah Cards" in memory of the 17 victims. Each "Mitzvah Card" listed nine different mitzvot that anyone could perform such as lighting Shabbat candles, gifting flowers to a friend, or donating food items to our university's food pantry. Each time someone checked off a mitzvah that they committed to perform, a "Mitzvah Card" was pinned to a string around the tent so that people could see how many good deeds were being done. When I came by the tent after my class, I was so excited to see more than 50 cards on the string. At Chabad's Shabbat dinner that Friday eve, the "Mitzvah Cards" were displayed on the wall, and all I could do was smile at the amount of love and support that the UCF community had offered in commemoration of this tragic event.